Over the years, Hugh Morton has taken hundreds of pictures of basketball great Michael Jordan.  There are 124 photographs of Jordan in the Morton online collection so far.  One image, however, stands out from all the others.  As Jordan turns … Continue reading →

Over the years, Hugh Morton has taken hundreds of pictures of basketball great Michael Jordan.  There are 124 photographs of Jordan in the Morton online collection so far.  One image, however, stands out from all the others.  As Jordan turns 50 years old today—Sunday, February 17, 2013—Morton collection volunteer Jack Hilliard looks back at that classic image. 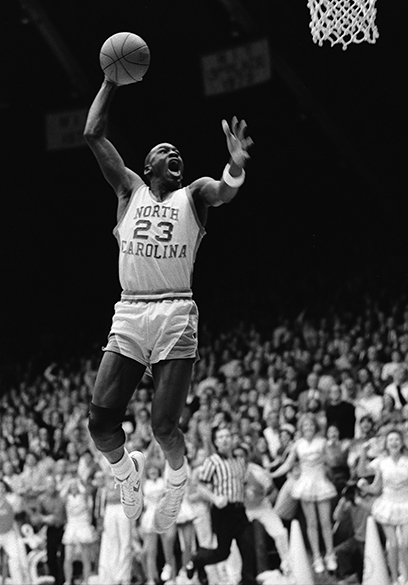 His biography on the NBA website states, “By acclamation, Michael Jordan is the greatest basketball player of all time.”

Jordan was one of the most effectively marketed athletes in the history of sports. Thanks to the emergence of the 24/7 cable sports channels—and the Internet in the latter part of his playing career—Jordan’s heroics became all access, all the time.  Michael Jordan has been the subject of a Sports Illustrated cover fifty-seven times (so far), and, according to Lew Powell of “North Carolina Miscellany,” he has had seventy-eight mentions on the TV show Jeopardy!.

When recalling Jordon’s UNC accomplishments, Tar Heel fans will often recall the final basket in the NCAA Championship game against Georgetown in 1982 that gave Head Coach Dean Smith his first national title.  Other folks, however, like to recall a different shot.

On February 10, 1983, in a game against the University of Virginia played in Carmichael Auditorium, the Tar Heels trailed by sixteen with 8:30 left in the game. It was then that the Heels started a classic comeback. By the time there was only 1:20 left on the clock, the Virginia lead was down to three points. Then a Jordan put-back made it a one-point game at 63-62. With under a minute to go, Virginia’s Rick Carlisle had the ball and got past Jordan, but Michael came up from behind and stole the ball.  Jordan drove to the hoop, making the famous basket that North Carolina author and sports historian Jim Sumner termed “the dunk for the ages.”  Heels win 64-63.

Hugh Morton once again was at the right place at the right time, capturing the moment with a classic image that has been reproduced dozens of times.  Morton, in his 1996 book Sixty Years with a Camera, called it his favorite picture of Jordan.  Morton always included the image in his slides shows while he told the story behind the picture. The story goes like this.

In early February 1983 Morton got a call from C.J. Underwood, the longtime anchor and reporter at WBTV, Channel 3, in Charlotte.  Underwood wanted to do a feature for his “Carolina Camera” news segment about Morton and his longtime association with UNC sports.  So they both agreed that the game on Thursday, February 10th in Chapel Hill would be a good time to meet and shoot the feature.

As the teams warmed up for the game, Jordan came over to Morton’s courtside location, as he often did.  During the course of the conversation, Morton told Jordan about Underwood and the WBTV photographer shooting the feature. As the two parted, Morton said, “Have a good game, Michael.”

Following that fantastic shot, Michael ran back up the court, brushed by Morton and asked, “Was that good enough?”

In 2009, Michael Jordan was inducted into the Naismith Memorial Basketball Hall of Fame and is currently the owner of the Charlotte Bobcats.

On February 18th when the new Sports Illustrated hits the bookstores, Jordan will once again be pictured on the front cover.  So far he has managed to avoid the legendary “SI Cover Jinx” fifty-seven times. (Fifty times according to the magazine if you don’t count “commerorative and collector’s editions as well as tiny insets or out of focus shots of MJ.”)  If all goes well after next week, you can add number fifty-eight.