It’s that time of year again when hundreds of thousands of college basketball fans huddle secretively with their notes on “bracketology.”  The NCAA basketball championship tournaments broke onto the stage this week and, once again, the UNC men’s and women’s … Continue reading → 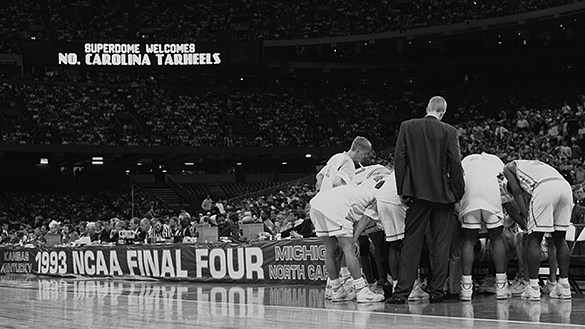 UNC basketball team in huddle during the North Carolina versus Michigan basketball game at 1993 NCAA finals in New Orleans.

It’s that time of year again when hundreds of thousands of college basketball fans huddle secretively with their notes on “bracketology.”  The NCAA basketball championship tournaments broke onto the stage this week and, once again, the UNC men’s and women’s teams find themselves in the mix.  Always hard-earned, NCAA tournament appearances are nonetheless commonplace for UNC’s basketball teams.

Readers of A View to Hugh know that Hugh Morton had a great love for UNC men’s basketball, photographing games regularly as far back as his days as a student in the late 1930s and early 1940s.  As the basketball teams head into their championship runs, Morton collection volunteer Jack Hilliard takes a look back at the men Tar Heels’ 1993 trip to “The Final Four” twenty years ago, when Carolina won its fourth national championship under legendary head coach Dean Smith.

It was one year ago today that library staff members learned of the untimely passing of our colleague, Bill Richards. In 1982, Bill was the Chief Photographer for the Chapel Hill Newspaper.  In 1988, he began working as a photographer and graphic designer in the UNC Office of Sports information.  He began working in the Library Photographic Service  in 1998, but continued working for Sports information into the 2000s. This post is dedicated to Bill who, like Hugh Morton, was an avid UNC basketball fan. 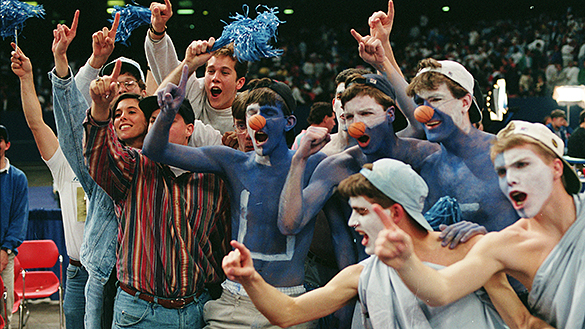 Eleven seasons had come and gone since Dean Smith’s basketball Tar Heels had won the 1982 NCAA championship in the Louisiana Superdome.  But in early April 1993 his team was poised and ready for another run at the big game in “The Big Easy.”

Most UNC fans agree that Smith’s 1992-93 team was one of his best. When all was said and done, their record was 34–4, with 26 wins in the regular season and 8 wins in the post season.  The one post season loss came in the ACC Tournament final, a two-pointer to Georgia Tech.  Following that disappointment, it was on to NCAA March Madness and a number one seed in the East, starting in Winston-Salem.  A twenty-point win over East Carolina and a forty-five-point win against Rhode Island put the Heels in the “Sweet 16” at the Meadowlands in New Jersey.  Then came a six-point win over Arkansas and a seven-point overtime victory versus Cincinnati . . . and it was on to the Crescent City and another Final-Four for Coach Smith (his ninth).

The 1993 Final Four was unique.  Three number one seeds and one number two seed would be playing for the championship: North Carolina, Michigan, and Kentucky along with number two seed Kansas.  The first national semi-final on Saturday, April 3rd would match Dean Smith’s UNC Tar Heels and Roy Williams’ Kansas Jayhawks.  Needless to say, there was plenty of ink and airtime about this rivalry.  Two years earlier, Kansas had beaten Carolina in the national semi-final 79 to 73.  Dean Smith played at Kansas in the early 1950s.  Roy Williams played and coached at Carolina in ‘70s and ‘80s, and one of Williams’ assistants was Matt Doherty who played for Smith during the 1982 NCAA championship season.  If the truth be known, Smith and Williams probably would rather be playing someone else in the semi-final game but they didn’t set the brackets. 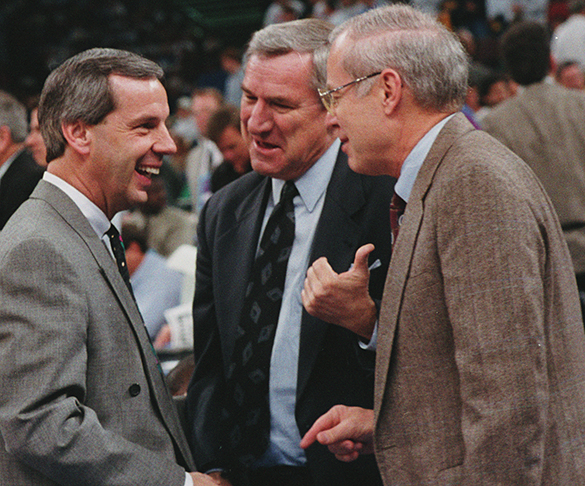 Row Williams, Dean Smith, and Bill Guthridge prior to the 1993 NCAA tournament semifinal in New Orleans, Louisiana. Cropped by the editor; the full-frame image (click to see photograph without cropping) includes Kansas assistant coach and former UNC player Matt Doherty.  A slightly wider crop, also without Doherty, appears in the book Return to the Top: The Inside Story of Carolina’s 1993 NCAA Championship.

During the warm-up for the game, photographer Hugh Morton got a classic shot, one that he would include in all his future slides shows.  The image shows Smith, Williams, Doherty, and then UNC assistant Bill Guthridge, current and future Carolina coaches from 1961 to the present.

Donald Williams’ twenty-one foot three ball made the score 63–55 with 9:35 to play.  But five minutes later, Carolina’s lead was once again down to four, 67–63 and Coach Smith called a time-out to change his lineup.  In the final 2:36, Donald Williams scored seven points as the Heels finally pulled away for a 78–68 win.  Eric Montross and Donald Williams accounted for forty-eight Carolina points.

Coach Williams, in his post-game news conference, said, “I’ll be pulling like the dickens for Carolina Monday night.”

Later that day, Michigan defeated Kentucky to set up a UNC vs. Michigan national final.  It would be only the second time two number one seeds had met for the championship.  (The other time was Carolina and Georgetown in 1982).

Once again there was lots of media coverage, focusing on a Rainbow Classic game between Michigan and Carolina, which Michigan wound up as the 79–78 winner back on December 29, 1992.

Monday, April 5th was a long day for me.  I did my usual morning show shift at WFMY-TV, and then returned in the evening for a “NCAA Countdown” special program just before CBS’ live coverage of the game.  By the time I got home, the game was well underway and Carolina trailed 23–13.  But three-and-a-half minutes later, the Tar Heels had tied the score at 25.  George Lynch, Eric Montross, and Derrick Phelps kept Carolina in front going into the halftime break.

Halfway through the second half, the Wolverines caught the Heels, tying the score at 56.  Chris Webber’s alley-oop at the 8:35 mark gave Michigan a 60–58 lead.  Five minutes later, Derrick Phelps’ fast break layup put Carolina back on top 68–67.  An Eric Montross dunk at the 1:03 mark pushed the UNC lead to 72-67.  Then Ray Jackson’s 18-foot jumper brought Michigan within three at 72–69.  Following a Michigan timeout, Chris Webber’s follow up shot made the score 72–71.  Then with twenty seconds remaining in the game Michigan’s Rob Pelinka fouled Carolina’s Pat Sullivan, who hit one of two foul shots.  Chris Webber got the rebound . . . seemed to travel, then took the ball the length of the court into the corner in front of his bench.  At this point, Carolina had fouls to give, so Lynch and Phelps set up a vicious trap.  Webber picked up his dribble.  With nowhere to go, only eleven seconds left in the game, and the Michigan coaches shouting “NO,” Webber called a timeout—a timeout he didn’t have.  Donald Williams calmly stepped to the line and hit the two technical foul shots, raising the score to 75–71.  Williams would hit two more foul shots following a Ray Jackson miscue, thus giving Dean Smith his 774th win and his 2nd NCAA Championship.  Final score:  Carolina 77, Michigan 71. 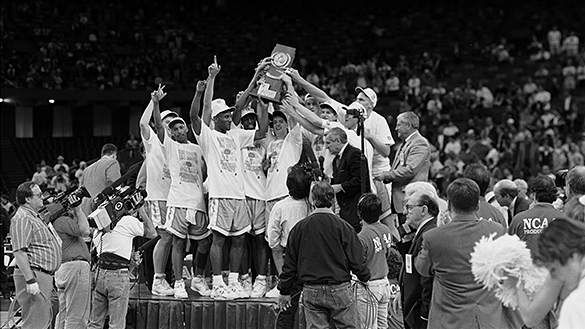 As the CBS cameras focused on the team celebration, a celebration of another kind began back in rainy Chapel Hill as 25,000 fans stormed Franklin Street—light blue paint in hand. As the bell from University Methodist Church rang out, a Tar Heel fan was heard to say:
“Dick Vitale, you picked the wrong winner tonight, baby.”  The headline in Tuesday’s Gastonia Gazette read: DEJA BLUE.

About 3 p.m. on Tuesday, April 6, 1993, a crowd started gathering in the Smith Center on the UNC campus. The crowd would eventually grow to be about 20,000 strong by the time the team bus pulled into the parking lot at 4:47.  As the Marching Tar Heels played the fight song, Pat Sullivan and Senior Matt Wenstrom, with NCAA trophy in hand, led the victorious Tar Heels into the arena.  Each team member was introduced by the “Voice of the Tar Heels” Woody Durham, and each spoke briefly.  Said Eric Montross:  “It just doesn’t get any better than this.”

Missing from the festivities was the man who had orchestrated the “Season of Dreams.”  Head coach Dean Smith wanted the celebration to be about his players, so he had scheduled a recruiting trip to Pennsylvania for Tuesday, April 6, 1993.

For those wanting to read more about UNC’s 1992-1993 season, see the book Return to the Top: The Inside Story of Carolina’s 1993 NCAA Championship.  The book contains an ample serving of Hugh Morton photographs made throughout that season.  You may see additional images of the UNC versus Kansas game and the 1993 championship game versus Michigan as part of the more than 8,000 Hugh Morton photographs online (A mere sampling of the 250,00 images in the entire collection!)