UNC’s men basketball team bowed out of the NCAA tournament over the weekend, but the UNC women’s team continues on its quest for a national championship this evening.  With basketball season still in high gear, Hugh Morton collection volunteer Jack … Continue reading →

UNC’s men basketball team bowed out of the NCAA tournament over the weekend, but the UNC women’s team continues on its quest for a national championship this evening.  With basketball season still in high gear, Hugh Morton collection volunteer Jack Hilliard looks back at a North Carolina basketball legend on the anniversary of UNC’s second place finish in the 1946 NCAA championship game played on March 26, 1946. 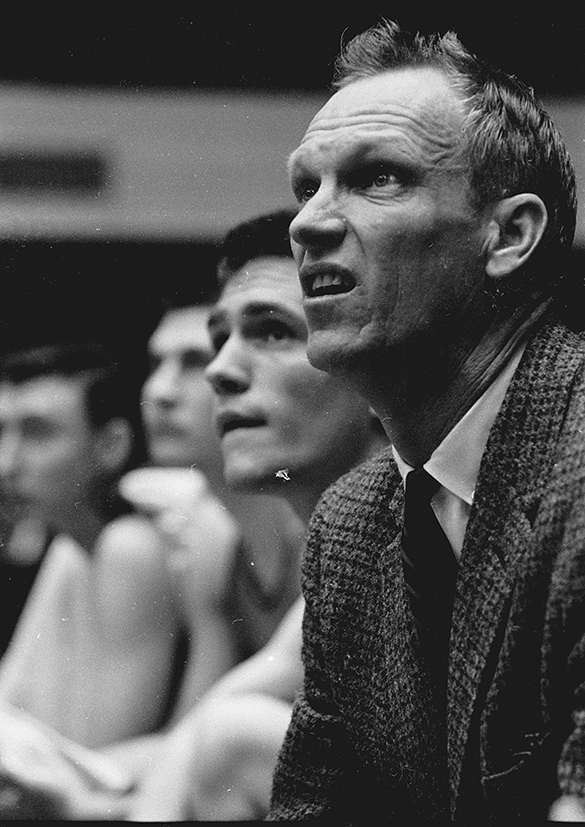 “I don’t remember exactly when everyone started calling me Bones, but with a name like Horace Albert, the sooner the better, right?”

—Bones McKinney from Bones: Honk Your Horn if You Love Basketball (1988)

For Horace Albert (Bones) McKinney, born in Lowlands, North Carolina on January 1, 1919, that specialty was his love for the game of basketball.  When he was five years old, the McKinney family moved to Durham and that’s where young Horace began playing his favorite game—starting at Watts Street Grammar School, then to Central Junior High, the YMCA, and finally to Durham High where, under Head Coach Paul Sykes, he led the team to two South Atlantic Prep Tournaments, two Duke-Durham Tournaments, three state championships, and the Interscholastic Basketball Tournament in Glens Falls, New York . . . all the while racking up sixty-nine straight wins.

McKinney graduated a little late from Durham High in the spring of 1940, then headed over to Raleigh for a college career at North Carolina State College (now North Carolina State).  A year of freshman ball was followed by a sophomore year when he led the Southern Conference in scoring with 200 points and was an all conference selection. On Christmas Day, 1941, Bones McKinney married the love of his life, Edna Ruth Stell. 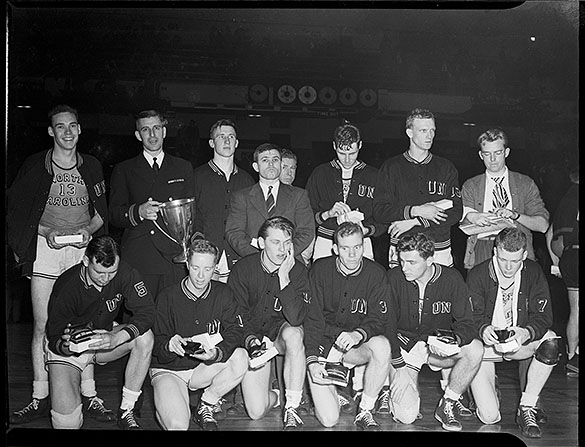 A week after the 1942 season ended, on April 2, 1942, he joined the Army.  At Fort Bragg, Bones played, coached, and led the team to wins in the Southeastern Amateur Athletic Union (AAU) Tournament in Savannah and the Southern AAU in Raleigh.  While at Fort Bragg, he became good friends with Ben Carnevale the head coach at UNC and on January 9, 1945, Bones McKinney became a Tar Heel—but the UNC basketball team was called the White Phantoms in those days. The highlight of the 1946 season, which was his only season at UNC, was a NCAA national championship game against Oklahoma A&M at Madison Square Garden.  The 43–40 loss was difficult for Bones as evidenced by Hugh Morton’s photograph of the award ceremony following the game. 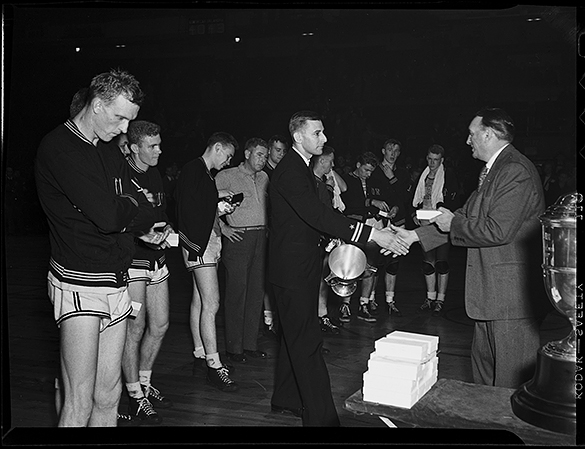 “In 1946, before the NCAA national championship became known as the Final Four, UNC lost in the championship game, 43 to 40 to Oklahoma A&M. The game was played in the old Madison Square Garden before 18,479 spectators. UNC head basketball coach and Navy lieutenant Ben Carnevale (shaking hands), who had responsibilities as the Navy Pre-Flight School at Chapel Hill as well, accepted the runner-up trophy. Carolina’s Horace ‘Bones’ McKinney (far left) was not pleased at being runner up.” Presenting the award is Harold G. Olsen, who was serving his final year as the NCAA basketball tournament chairman. (Identification obtained from book ON TOBACCO ROAD.)

By the end of the ‘46 season, the McKinney family had grown to three and Bones realized that he needed a paying job to support the family, so he left UNC and went to work for Hanes Hosiery.  It was while there that an unbelievable phone call came.  On the other end of the line was Red Auerbach, who was going to form the “Basketball Association of America”—and he wanted Bones to play for him.  Just when it looked like basketball was over for Bones McKinney, along came an opportunity to play for pay: $6,750 for a season with a $500 advance.  He would play for the Washington Capitols for five seasons, making all pro and led the team to the Eastern Division championship his first season, 1946-47. He led the team into the playoffs each year from 1946 through 1950.

On January 9, 1951 the Washington Capitols folded, and McKinney was sent to the Boston Celtics as a player-coach.  While there he made some NBA history.  He recruited and signed Earl Lloyd, the first African American player in the NBA.  Following the ’52 season, McKinney left pro basketball and enrolled in the Southeastern Theological Seminary at Wake Forest.  While in class on November 8, 1952, Wake Forest Head Basketball Coach Murray Greason walked in and asked Dr. Bill Strickland if he could speak with student McKinney.  Greason needed an assistant coach and offered Bones the job, a job that would last until March 26, 1957 when he took over the head coaching position at Wake.

In February of 1960, a writer for the magazine Life came to Winston-Salem to do a McKinney feature story.  It wasn’t the first time he had made the big time.  There is an action shot by Hugh Morton contemporary Hy Peskin on the front cover of Collier’s dated January 15, 1949.  Life published another article, titled “Basketball’s Incredible Mr. Bones” in its February 22, 1960 issue, which featured the following:

People go to Wake Forest basketball games to see a winning team perform.  For the same price, they get Bones McKinney, the coach with his own private volcano.  Once the game starts, the bench can’t hold him.  The climactic moment arrives when Mr. Bones erupts dramatically from the sideline, looking like a dead ringer for Ichabod Crane.

In 1961 and 1962, McKinney led the Deacons to Atlantic Coast Conference championships, with the ’62 team playing in the NCAA Final Four.  Following the ’64-’65 season, Wake Forest made a coaching change and Bones McKinney took a job with the North Carolina Board of Corrections, but soon after the ’65-’66 basketball season started, he got a call from ACC TV producer Castleman D. Chesley.  It seems that Bones’ good friend Charlie Harville had recommended him as a possible broadcaster with the ACC network.  Bones was eager to get back into basketball, so on January 8, 1966 at the UNC vs. Duke game in Chapel Hill, Bones McKinney became a TV basketball commentator and analyst, working with play-by-play man Jim Thacker, and stat man Charlie Harville.  At first, McKinney didn’t think he was very good as a broadcaster, but when he was invited back, he figured he must be OK.

Then in early 1969 . . . another phone call and another basketball opportunity.  On January 2, 1969, Southern Sports Corporation purchased the Houston Mavericks, a team in the American Basketball Association.  President Jim Gardner was planning to move the team to North Carolina and he wanted Bones as his head coach.  Gardner and McKinney struck a deal and Bones McKinney became to first head coach of the newly formed Carolina Cougars, leading them that year to the ABA playoffs.

One of my favorite Bones McKinney stories came during that ’69-‘70 season. During a hotly contested game, Bones yelled out at an official following a questionable call.

“Hey, you’re either blind or you’re a crook.”
“And you’re out of the game,” yelled back the ref.
“Why?” asked Bones defiantly.
“Because you called me a crook,” replied the official.
“Did not,” yelled Bones, looking back over his shoulder as he departed, “I gave you a choice.”

While still coaching the Carolina Cougars, McKinney was inducted into the North Carolina Sports Hall of Fame with the Class of 1970. 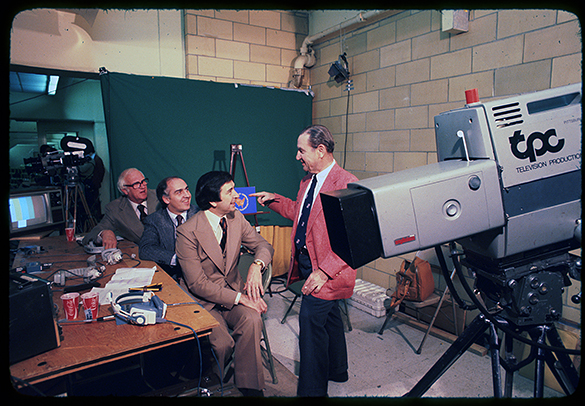 Seated are (L to R) Bones McKinney, Billy Packer, and Jim Thacker, with Castleman Chesley (standing) behind the scenes at UNC-Chapel Hill versus Marquette basketball NCAA finals in Atlanta, Georgia.

The 4th Annual ABA All-Star Game was played in the Greensboro Coliseum on January 23, 1971 and CBS-TV carried the game nationwide, with play-by-play by Don Criqui and Pat Summerall and color commentary by Bones McKinney.

On November 18, 1979 during halftime of the Washington Redskins vs. Dallas Cowboys game in RFK Stadium, McKinney was inducted into the Washington Hall of Stars.  In 1985 his longtime friend Charlie Justice joined him in the DC Hall.  McKinney continued to coach all-star games, and was in high demand as an after-dinner speaker during the 1980s and early ‘90s.

When the Greensboro News and Record arrived on Saturday morning May 17, 1997, the front page headline read, “Legendary Wake Coach Dies at 78.”  Staff writer Jim Schlosser related the story of McKinney’s death at 5:05 PM on Friday, May 16th at Wake Medical Rehab Center following a stroke two weeks earlier.  On Sunday, I went out to WFMY-TV and put together a video piece for Monday’s “Good Morning Show.”  As I was putting the piece together, I kept thinking about a Bones McKinney quote that I had read years before in his 1988 book.  The quote was part of the short section about his broadcasting career.  It went like this: “I soon found out that if your director ain’t no good, you ain’t no good.”  He went on to talk about the magnificent Raycom directors, Norman Prevatte from WBTV in Charlotte, John Young from WUNC-TV, and Frank Slingland from WRC-TV in Washington, DC.

During my time in broadcasting, I never had the honor of directing a Bones McKinney game or a Bones McKinney broadcast.  However, I worked several Carolina Cougar games in 1972 after Bones had moved on.  But in 1969, WFMY-TV produced the Carolina Cougar coach’s show.  It was called, of course, “The Bones McKinney Show.”  Veteran WFMY Producer/Director George Leh was director and Woody Durham was producer along with Bones. The show was usually taped on Thursday afternoons for weekend playback.  On this particular Thursday, Leh was not available to direct so production manager Jack Forehand asked me to direct the show. For twenty-eight minutes and thirty seconds on Thursday afternoon, March 5, 1969, I knew I was part of something very special.