Wednesday afternoon was one of those times, like so many others in this line of work, where what you end up working on isn’t even on your radar when you step off the bus and head to the office.  Here’s … Continue reading → 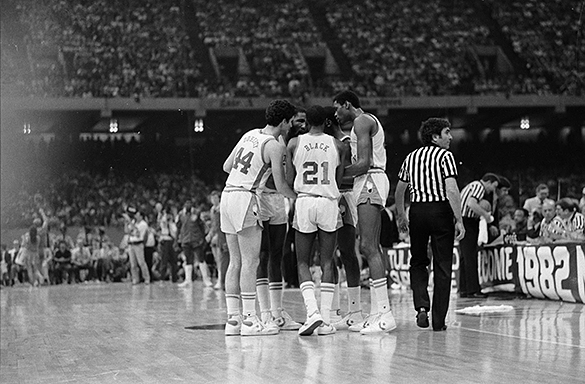 Wednesday afternoon was one of those times, like so many others in this line of work, where what you end up working on isn’t even on your radar when you step off the bus and head to the office.  Here’s what happened . . . .

Around 2:30 a new staff member in the the library’s Digital Production Center received a phone call from Yahoo! Sports requesting Hugh Morton photographs.  He asked me who should take the call, and I recommended he transfer the call to Keith Longiotti in our Research and Instructional Services Department.  Keith handles most of the image requests for the North Carolina Collection Photographic Archives.

Shortly after the call I saw an email that I had received before the phone call, but hadn’t seen because I had been away from my desk.  The email was from an associate producer at Yahoo! Sports, and had its beginnings on Tuesday with a referral from The Daily Tar Heel to the journalism school’s librarian Stephanie Brown.

Yahoo! Sports has been producing a series called “Memorable Moments: March Madness.”  Their last episode was to feature the 1982 NCAA men’s basketball championship game between UNC and Georgetown.  They requested photographs or footage from the game, mentioning that they had seen some Hugh Morton photographs in the online collection of Morton images, but nothing from the closing moments of the game.  The producer wrote,

I’m looking for any photos AFTER Michael Jordan’s go-ahead jumper with :17 left in the game.  Specifically Georgetown’s Fred Brown throwing the ball away to James Worthy during the subsequent play.  Anything of Worthy and/or Brown from the final moments (before the steal, during the steal, after the steal, huddles, shooting free throws, etc.) would be outstanding.

Stephanie replied that the Park Library did not hold such materials, and that she should talk to me about the Hugh Morton collection.  I wrote the associate producer immediately after I finished reading her email, telling her that I had read her email shortly after the telephone call.

If you are a regular reader of A View to Hugh, then you know only 8,000 of the 250,000 items in the Morton collection are online.  I told the associate producer that I would look in the remainder of the collection to see if I could locate any images that were not online.  The catch?  They needed images that day, or early Thursday at the latest.  (Luckily their offices are on the west coast so that gave me an additional three hours to work on the request.)  They had seen Morton’s photograph of the team huddle shown above, but not in the online collection.  Did we have it?  Did we have anything else?

Given their tight deadline and the proximity to closing time, we could have settled for the images they already seen and requested.  Keith sent them scans of the images they’d seen so they could get started.  I couldn’t fathom, however, that Hugh Morton would not have photographed the pivotal closing moments unless he had been on the opposite end of the court.  That, coupled with an opportunity to give the Morton collection some national or even international exposure was too good to pass up.  I jumped on it.

First I checked for scans saved on our image server, but not used in the online collection.  (Yes, there are thousands of them!)  To do that, I had to review all the prints, negatives, and slides from the games, because the scan’s file names are written on the storage enclosures.  The huddle scene above was previously scanned, but not included online.

But look at what else I found that wasn’t scanned: 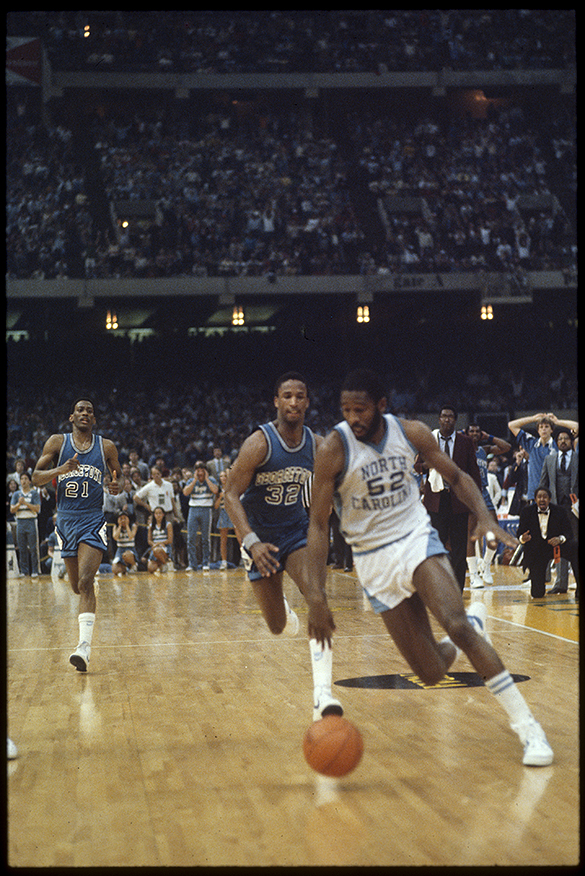 After watching the closing moments of the game on YouTube, I was convinced the scene above was James Worthy driving the basketball down court after stealing Fred Brown’s errant pass.  The steal and drive happened right in front of Morton.  He snapped the camera shutter just a moment before Worthy was intentionally fouled by Georgetown’s Eric Smith (#32).  Eric “Sleepy” Floyd (#21) is on the left.  Both Floyd and Worthy are from Gastonia, North Carolina and were good friends.  The turnover happened so unexpectedly on the other end of the court, and so quickly that it may have caught Morton off guard because Worthy is out of focus.  The result, however, means that Morton captured the dismay on Floyd’s face, and the expressions on the bench and cheerleaders are more visible.

(By the way, if you watch the CBS broadcast, you can see Hugh Morton pop into the frame about 25 seconds after the end of the game.  This may be when Dean Smith told Morton, “Stick with me.”)

Below, Morton photographed Worthy taking one of his free throws with only two seconds remaining on the clock. 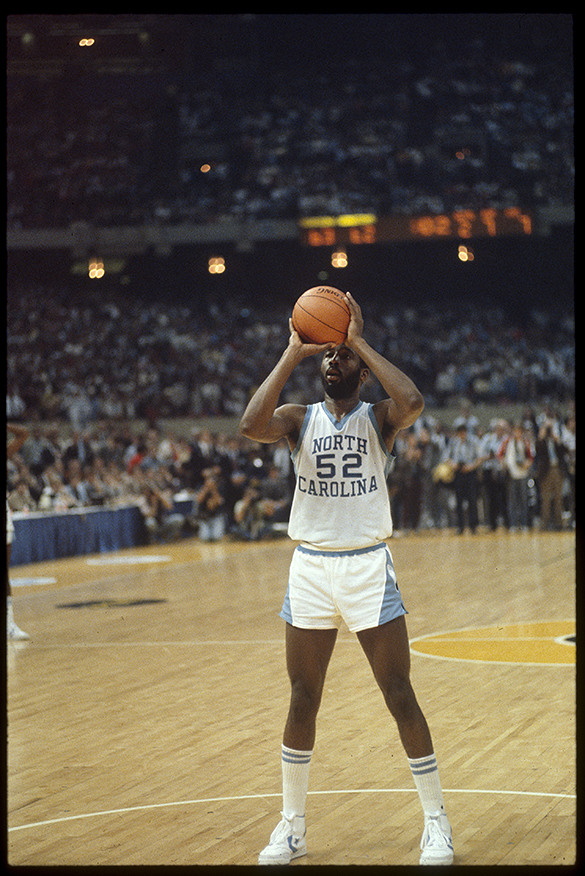 A staff member of the Digital Production Center helped me make the scans of the two 35mm slides.  (I couldn’t do it because they just starting using new software.)  We had the slides finished before 6:00.  I continued to dig Thursday morning, taking advantage of the time zones difference, but didn’t find additional images that fit the hole they needed to fill.  We delivered the scans by their deadline, and Yahoo! Sports was thrilled.

We received the link to the story, “Michael Jordan’s gutsy shot leads to North Carolina title” this morning.  The downside of our efforts is that Yahoo! Sports doesn’t credit their sources after the episodes in “Memorable Moments: March Madness,” so you won’t see Morton or the photographic archives credited.  The upside is that seven Hugh Morton photographs appear in the episode (one of Worthy during the East Regional final game against Villanova in Raleigh, and six from the championship game), and the library did receive a respectable commercial use fee to help support the work that we do with the collections.  The team huddle photograph also opens a one-minute piece, “Memorable Moments: The huddle before Michael Jordan’s shot.“  Another of Morton’s images appears in a second short, “Memorable Moments: James Worthy remembers UNC vs. Georgetown.”

A remaining mystery emerged from this reference request.  I didn’t find a photograph of Michael Jordon’s game winning shot, which occurred near the very spot of the Worthy photograph above.  Did Morton photograph that memorable moment, too?  If so, I didn’t find it.  Yet.

1798 The cornerstone was laid for Main Building (now known as South Building). The structure, however, was not completed until 1814.
1919 At a special meeting of the University's Executive Committee, acting-Chairman of the Faculty (later to be president of the University) Harry W. Chase recommended that Professor Eugene Cunningham Branson be made the sixth Kenan Professor. Professor Branson, who organized the Department of Applied Rural Economics and Sociology, had received an offer from the University of Virginia, but the Kenan Fund enabled the University to keep him on staff.
1920 At a meeting of the University's Executive Committee, President Harry W. Chase named three faculty members to be Kenan Professors. They were: Professor of History, J. G. de Roulhac Hamilton; Professor of the Romance Languages and Literature, William M. Dey; and Professor of Geology and Mineralogy, Collier Cobb. Professors Cobb and Dey were also the first to be named Kenan Research Professors.
2000 The University held a groundbreaking ceremony for the Frank Porter Graham Student Union renovation and expansion.
2003 One week after leading the University of Kansas men's basketball team to the national championship game, Roy Williams was hired to replace Matt Doherty as men's basketball head coach at the University. Williams spent fifteen seasons as the Kansas head coach and ten years as assistant coach under Dean E. Smith.