It’s been a year since North Carolina said goodbye to one of its favorite sons.  It was Tuesday, July 3, 2012 that Andy Griffith died at his home in Manteo, a place where his acting career got an excellent start … Continue reading →

It’s been a year since North Carolina said goodbye to one of its favorite sons.  It was Tuesday, July 3, 2012 that Andy Griffith died at his home in Manteo, a place where his acting career got an excellent start as Sir Walter Raleigh in Paul Green’s “The Lost Colony.” Morton collection volunteer and blog contributor Jack Hilliard takes a brief look at an American icon from Mount Airy, North Carolina. 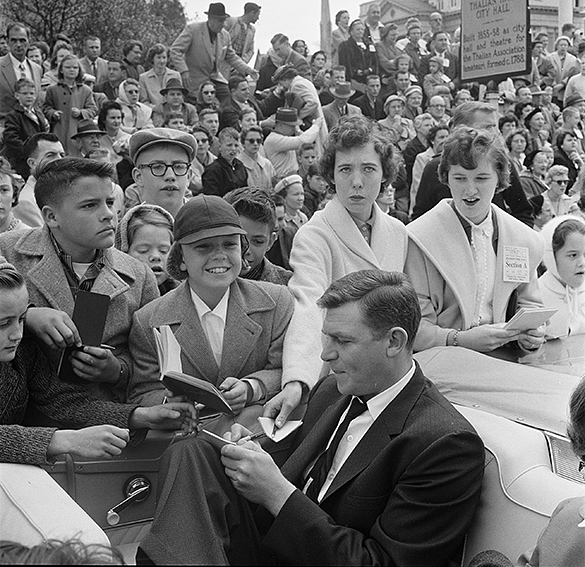 It was Friday, February 13, 2004 when I attended the memorial service for Sarah Justice in Shelby, North Carolina.  At a reception following the service at The Church of the Redeemer, I had an opportunity to chat with my friend Hugh Morton who had just completed a book tour across the state.

“Pretty good,” he said.  “It’s selling far better that I ever thought it would.  You know I have really enjoyed meeting so many good Tar Heels during these book signings. I was in Manteo last week at a little book store.  I was just sitting there signing books when the next person in line stepped up to the table.  It was my dear friend Andy Griffith.”

Andy Griffith and Hugh Morton go back a long way.  All the way back to 1953 when Morton needed an entertainer for a banquet at the Carolina Inn in Chapel Hill.
“Someone suggested a UNC graduate student who was active in the Carolina Playmakers,” said Morton in a 1982 interview.  “I was able to hire the student for 25 dollars and he performed a monologue called “What It Was, Was Football.”  He was known then as Andrew Griffith.  The crowd that night loved the routine that Griffith had written the year before and a couple of weeks later, Chapel Hill record producer Orville Campbell recorded it.  On November 14, 1953 Campbell released 500 copies of the tale and Griffith was on his way.

In January of 1954, Griffith’s new manager Richard O. Linke secured a live guest spot on the CBS-TV show Toast of the Town.  (That show would become The Ed Sullivan Show on September 25, 1955.)  It would be Andy’s introduction to live television.  His nervousness and his inexperience were clearly visible and the performance didn’t go over well.  Later Andy would say he had no recollection of his performance.

Griffith learned his live TV lessons well and on March 15, 1955 he starred in ABC-TV’s The United States Steel Hour production of No Time for Sergeants. This time the show was a hit and on October 20, 1955 the show opened on Broadway at the Alvin Theater. It would run for 796 performances and Griffith would be nominated for a Tony in 1956.  Playing the part of Corporal Manual Dexterity was Don Knotts who was making his Broadway debut as well.  Griffith and Knotts would become good friends . . . more on that later.  The show closed on September 14, 1957.

Next up for Griffith was the role of Larry “Lonesome” Rhodes in director Elia Kazan’s film A Face in the Crowd.  It debut in June 1957 and was another hit for Griffith.  Then in 1958 Griffith and company headed up the film version of No Time for Sergeants (watch the original trailer).  When the film opened at Greensboro’s Carolina Theater on July 5, 1958, Andy became an honorary citizen of the Gate City.

Andy Griffith was on a roll. 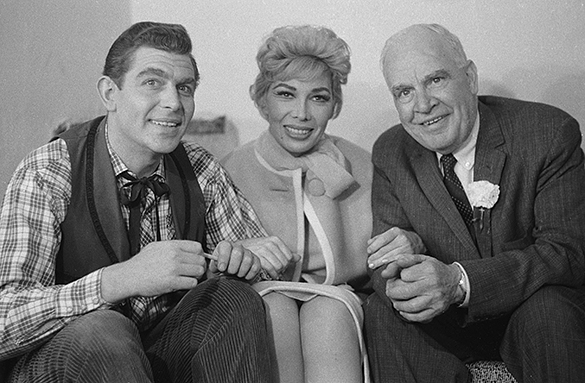 On April 23, 1959, he returned to Broadway for his first musical comedy Destry Rides Again.  That show would run for 472 performances at the Imperial Theater.  There was another Tony nomination for Andy.

Then, in the fall of 1959, Richard Linke called . . . this time about a possible TV show.
That show turned out to be The Andy Griffith Show, and was born during a series of meetings between Andy, Richard Linke, and Sheldon Leonard who was the producer of the highly successful The Danny Thomas Show, which, as it turned out, aired the Griffith pilot. (Watch the pilot—parts one, two, and three).  Between the pilot episode and the first Griffith show on October 3, 1960, Andy brought on board his old buddy Don Knotts to play Deputy Barney Fife.  As the TV sports guys would say “the rest is history.”  Sheriff Andy Taylor turned out to be the defining character for Andy Griffith and the show ran for eight seasons on CBS and continues to this day in reruns.

Following the final episode on April 1, 1968, there was a long dry spell for Andy Griffith.  Many mediocre movies and TV shows followed, but none came close to matching the success Andy had found in Mayberry, North Carolina.  Two divorces and a major health issue threatened to end his career, but Andy persevered.

It was in a 1984 NBC mini-series titled Fatal Vision that Andy caught the eye of NBC Entertainment President Brandon Tarnikoff and another gigantic TV series was born.  Andy became Benjamin Leighton “Ben” Matlock when the network broadcasted the television movie Diary of a Perfect Murder as the pilot for the TV series Matlock on March 3, 1986.   The first regular episode aired on September 23, 1986, and ran for nine seasons ending on May 7, 1995.  In 1989 Griffith brought the production to Manteo, the place where he would retire. 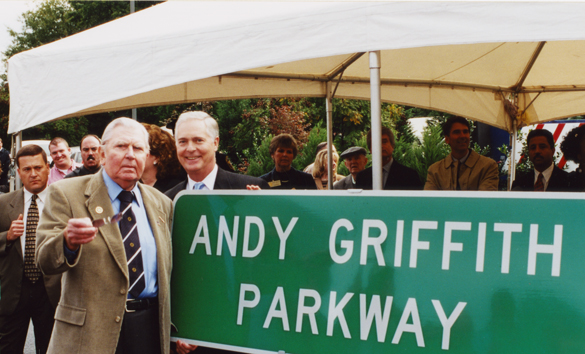 Andy Griffith returned to his hometown for the first time in 40 years.  Mount Airy held a dedication ceremony on October 16, 2002 in the parking lot behind City Hall.  Eleven miles of US Highway 52 became known as the Andy Griffith Parkway.  Andy, along with wife Cindi, was joined that day by his friends Dr. William Friday, Hugh Morton, and North Carolina Governor Mike Easley . . . along with more than 3,000 adoring fans.

Andy Griffith once said, “When I discovered I could entertain, I worked hard at it.  It’s the only thing I do well.  I can’t be a company director.  I can’t be an accountant.  I can’t make furniture, but I can entertain.”

I don’t know this for sure, but I believe that meeting with Hugh and Andy at the book store in Manteo in February of 2004 was their last meeting . . . that is until July 3, 2012 when I choose to believe Andy joined Hugh in a very special place.