The University of North Carolina at Chapel Hill will kick off its 2013 football season tonight, August 29th, in a nationally televised game broadcast from Columbia, South Carolina.  It will be the fifty-sixth time the two teams have met, with a storied … Continue reading →

The University of North Carolina at Chapel Hill will kick off its 2013 football season tonight, August 29th, in a nationally televised game broadcast from Columbia, South Carolina.  It will be the fifty-sixth time the two teams have met, with a storied past that dates to 1903.  Morton volunteer/contributor Jack Hilliard takes a brief look at the history of this backyard battle. [EDITOR’S NOTE: this post was updated on 30 August 2013 to resolve an unknown technical gremlin that prevented the webpage from rendering properly.] 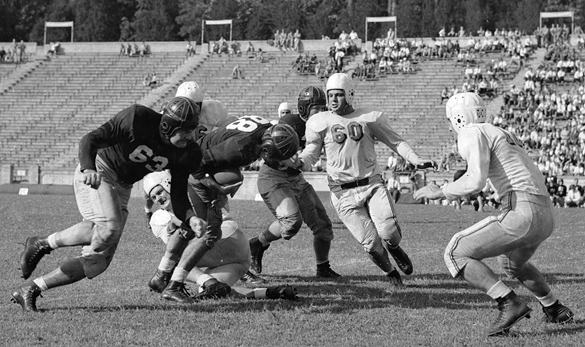 Hugh Morton’s photograph from the 27 September 1941 UNC versus USC football game, cropped as published in The Daily Tar Heel with the caption, “AL GRYGO, SOUTH CAROLINA’S sensational half back, rips through the center of the Tar Heel line for a ten-yard gain during the second quarter of yesterday’s contest. Running interference for him is Krinovak, USC guard and coming in for the tackle are Carolina’s Bill Faircloth [#60], and Joe Austin. The photograph also appeared in the 1942 yearbook Yackety Yack. (In the yearbook caption, Grygo only picked up six yards.)  South Carolina defeated UNC 13-7.

When the University of North Carolina takes the field at Williams-Brice Stadium in Columbia, South Carolina to start its 125th football season on ESPN College Football Thursday Primetime, I can safely predict that Carolina will win. The thing is, which Carolina?  Will it be Larry Fedora’s North Carolina or Steve Spurrier’s South Carolina?  Vegas money is on the team from the south in 2013 by twelve points, but when these two teams meet, anything might happen as evidenced by what has gone before.

When Carl Snavely’s Tar Heels flew into Columbia on Friday, October 7, 1949, they were riding atop an eighteen game regular season winning streak and were primed and ready to meet a strong South Carolina eleven.  UNC’s captain, Charlie Justice, was two games into his senior year and was leading the number sixth ranked Tar Heels.  It was like homecoming for Justice: there were six players on the South Carolina squad from his hometown of Asheville, plus Justice and USC’s head coach Rex Enright were good friends.  Enright had recruited Charlie in January of 1946; at one point Justice was planning to join Enright at USC, but that didn’t work out.

The afternoon of Saturday, October 8, 1949 was warm with a few threatening clouds as 28,500 fans poured into Carolina Stadium, (it’s Williams-Brice Stadium today), setting a record, at the time, for the largest crowd ever to see a football game in the state of South Carolina.

In place on the Tar Heel sideline was photographer Hugh Morton. 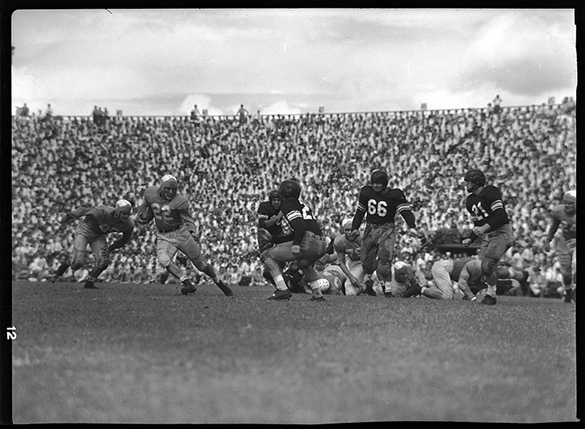 Charlie “Choo Choo” Justice evades several USC Gamecock tacklers during the October 8, 1949 USC versus USC game at Carolina Stadium. A detail from this negative appears in the February 1951 issue of The Alumni Review.

Writing in the game-day program, columnist “Red” Ballentine said, “When you mention the Tar Heels, there is one gentleman who is foremost in football minds—a genuine Southern celebrity who goes under the handle of Charlie Justice—known to all the world as Choo Choo.”

Reporting on the game, the Greensboro Daily News noted that many fans carried portable radios in order to listen to the World Series game between the Yankees and the Dodgers.

South Carolina surprised the shirt-sleeved crowd by holding the heavily-favored Tar Heels to a 7-7 halftime tie, but in the second half it was all Charlie Justice and Art Weiner. Early in the second half, with the ball at the SC 47, Justice hit Weiner on a 24-yard pass. A drive later it was Justice to Weiner again, this time for 40 yards. The Heels rolled to a final score of 28 to 13. 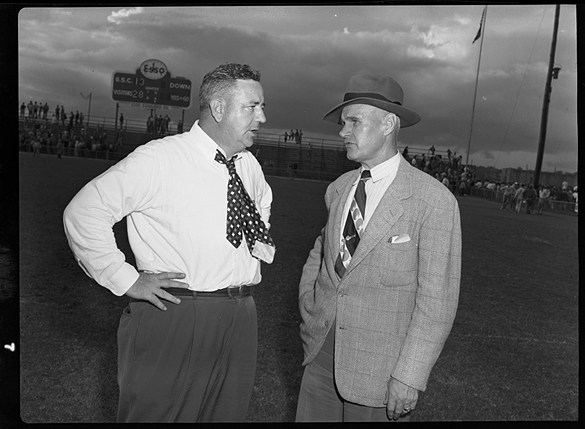 Following the game in an interview with Al Thomy of the Greensboro Daily News, Enright said, “Just when we stopped their running, they would pass. And if we dared concentrate on their aerial game, they would come back on the ground. . . Justice and Weiner form a great offensive combination. They are just like the Yankees.” (By the way, the New York Yankees won that World Series game over the Brooklyn Dodgers also played on October 8th by a score of 6 to 4).

Enright was not questioned about an incident that occurred in the first quarter during a UNC drive, when a close fourth down play was ruled a Tar Heel first down. Following the ruling, during a UNC time out, Enright called Justice over to the sideline and asked the Tar Heel captain to ask for a measurement, which he did and the measurement proved that referee J.D. Rogers, Jr. had made the correct call.

About two months after the game, Charlie Justice was selected for the Collier’s All America team, and the magazine published a Hugh Morton photograph of Justice from the USC game for its December 10, 1949 issue.  In 1997, that same Morton image would be placed on display in the Charlie Justice Hall of Honor on the first floor of the Kenan Football Center on the UNC campus. 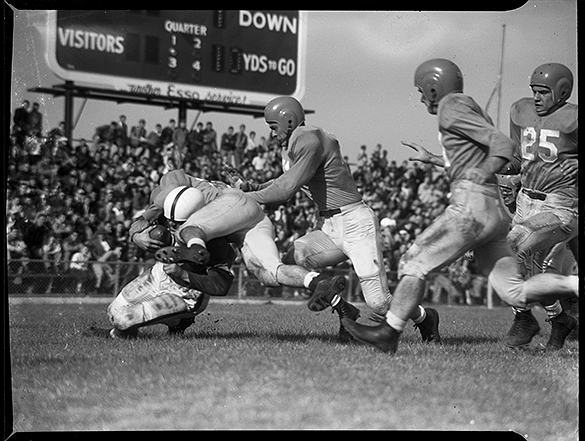 A little over a year after that ’49 game, Enright’s and Snavely’s teams met again in Columbia’s Carolina Stadium.  On November 18, 1950, 25,000 fans, including South Carolina’s Governor Strom Thurmond and photographer Hugh Morton, saw the Tar Heels fall behind by a 7 to 0 score early in the first quarter, but saw them come back with two scores in the second on a combination of A-formation and single wing plays.  As it turned out, the halftime score of 14 to 7 was also the final score. 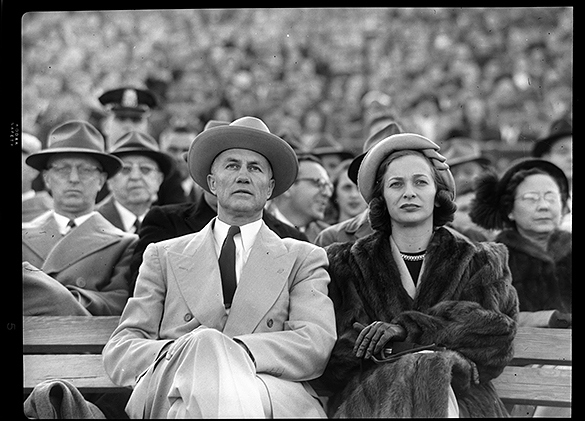 UNC put up another convincing win against USC when the teams met in Kenan Stadium on October 13, 1951. A homecoming crowd of 34,000 cheered the Tar Heels to a 21 to 6 victory with Larry Parker, Billy Williams, and Bud Wallace leading the Tar Heel attack. On October 14th, readers of the Wilmington Morning Star were treated to two Hugh Morton action photographs from that twenty seventh battle of the Carolinas.

Between 1951 and 1963 the teams met twelve times with UNC winning nine and USC winning three. Then starting in 1967 North Carolina suffered five straight losses before winning three, in ’77, ’78, and ’79.

Overall North Carolina has won in the series thirty-four times while South Carolina has won seventeen, and there have been four ties.  The series renewal in 2013 will pit the number 6th ranked Gamecocks against the 24th ranked Tar Heels, but the Tar Heels just might have one thing in their favor. The August 19th issue of Sports Illustrated has a regional cover featuring South Carolina.  Ever heard of the “Sports Illustrated Cover Jinx?” 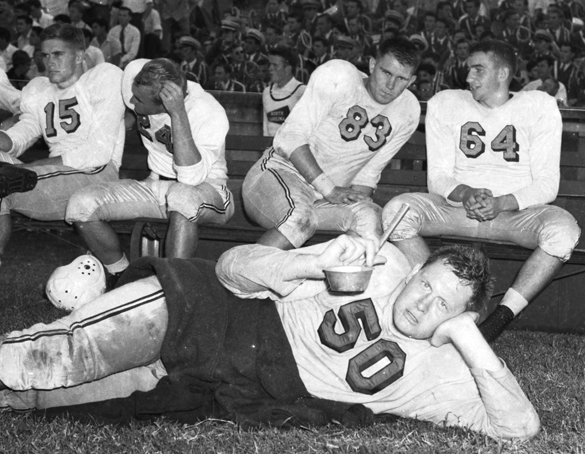 The Charlotte News published three Morton photographs the Monday after the 1941 UNC loss at South Carolina, including this uncredited sideline candid with the caption “BEATEN AND DISPIRITED the Tar Heels couldn’t raise a grin Saturday afternoon as their ball club went down before South Carolina’s powerful Gamecocks. Co-captain Carl Suntheimer is stretched out in front of the bench with the dipper; Corn, Webb, Hussey and Gordon are on the bench (left to right). Photograph cropped, as published, from a wider view.  The 1942 Yackety Yack also published this photograph, with a wider crop, in a two-page spread called “It’s All Part of the Game.”