On this fiftieth anniversary of John F. Kennedy’s assassination, A View to Hugh would be remiss without a post about Kennedy.  But what to write?  JFK has been mentioned or featured several times here, including “A Spark of Greatness,” a … Continue reading → 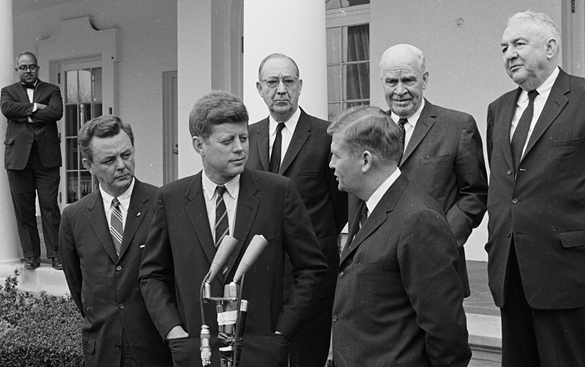 On this fiftieth anniversary of John F. Kennedy’s assassination, A View to Hugh would be remiss without a post about Kennedy.  But what to write?  JFK has been mentioned or featured several times here, including “A Spark of Greatness,” a four-part series (the link is for part one) related to the presidential and North Carolina gubernatorial race for 1960, and “Memorial for JFK, May 1964” that tells of the ceremony at Kenan Memorial Stadium on 17 May 1964 and Hugh Morton’s chairing the statewide effort to raise funds for North Carolina’s contribution to the John F. Kennedy Presidential Library.

An underutilized portion of the Morton collection is the moving image holdings, which are quite extensive.  A View to Hugh, however, has yet to include a post that draws on any of the footage . . . until today.  The link below leads to about a minute of film (without sound) shot by Hugh Morton:

On 27 April 1961 Morton, as chairman of the Battleship USS North Carolina Commission, made this motion picture footage while visiting President John F. Kennedy at the White House Rose Garden.  Morton was part of a delegation that included several North Carolinians: Hargrove “Skipper” Bowles, Jr., director of the state’s Conservation and Development Board; Governor Terry Sanford; United States Secretary of Commerce Luther H. Hodges (the state’s governor prior to Sanford) and United States senators B. Everett Jordan and Sam Ervin, Jr.  The footage shows Sanford presenting Kennedy with the first “admiral” certificate in the “North Carolina Navy” as part the fundraising effort to bring the mothballed WWII-era battleship USS North Carolina from New Jersey to Wilmington, N. C.  Admirals would be those who donated $100 or more to the effort.

In reality, it was a different framed item altogether.  The certificate wasn’t back from the printer in time, so a framed item from the office of White House Press Secretary Pierre Salinger served as a surrogate.  Oddly enough, the stand-in certificate was for Salinger’s admiralty in a Flagship Fleet.  Kennedy burst into laughter when he caught the substitution. 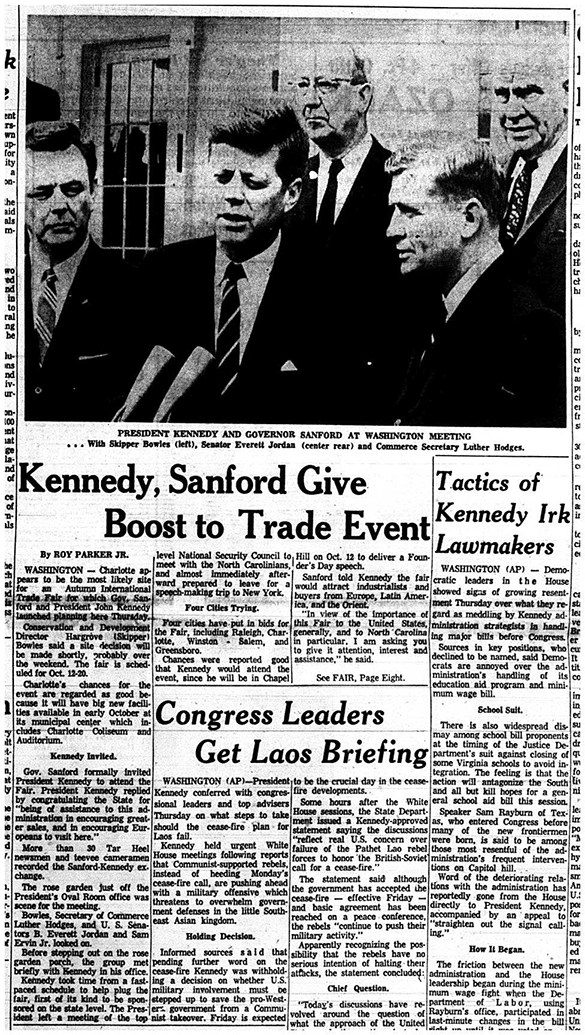 The larger mission at hand was planning for North Carolina’s Autumn International Trade Fair, then thought likely to be held in Charlotte in October later that year.  According to Roy Parker, Jr.’s article the following day in Raleigh’s News and Observer, Kennedy “took time from a fast-paced schedule to promote the fair.” After leaving a top-level National Security Council meeting, Kennedy met briefly with the group inside his office before they stepped outside to the Rose Garden.  Kennedy said a few non-committal words of endorsement for the exposition (you can listen to a brief recording from the Kennedy Library website) after Sanford invited Kennedy to attend, because Kennedy would be speaking at UNC Chapel Hill during its University Day celebration on October 12th.

It would seem the battleship commission presentation took place moments after the trade fair promotion.  The News and Observer also published a photograph of that presentation, which appeared on page 38. 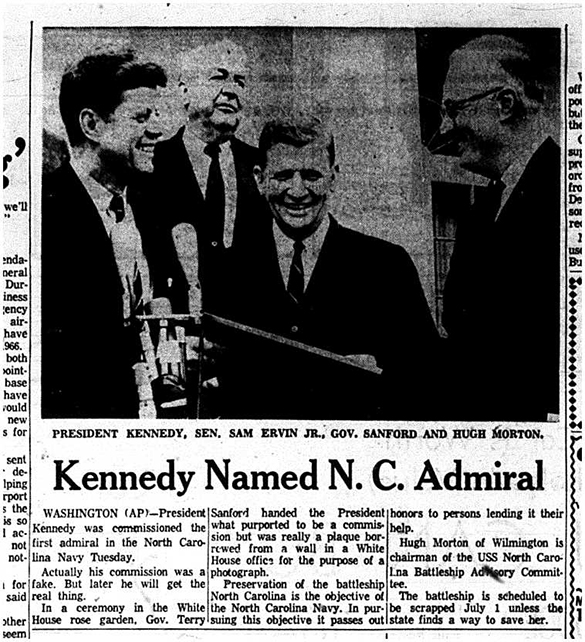 1825 University students provided a reception for the Marquis de Lafayette in Raleigh. The reception was accompanied by a public dinner and ball.
1966 Frank Wilkinson lectured at the off-campus Hillel House during the Speaker Ban Law controversy. Wilkinson, who had taken the Fifth Amendment before the United States House of Representatives' Un-American Activities Committee, spoke during the day from a Franklin Street sidewalk, which was Town of Chapel Hill property, to students sitting on campus grounds--just on the other side of "Gov. Dan K. Moore's (Chapel Hill) Wall." Wilkinson also attempted to speak at Memorial Hall, but campus officials prohibited him from doing so.
1972 Richard Epps became the first African American student body president at the University. Although campus elections were held on February 29, Epps was not declared the winner until March 2 due to computer problems and a possible runoff.
1974 In one of the most famous comebacks in NCAA basketball history, the men's basketball team rallied from an 8-point deficit with only 17 seconds left to force the game into overtime against Duke University. The Tar Heels then went on to win 96-92.