UNC head football coach Larry Fedora will be taking his Tar Heels to the Belk Bowl in Charlotte on Saturday, December 28th. The 2013 team qualified for bowl eligibility on November 23rd with a resounding win over Old Dominion—their sixth … Continue reading →

UNC head football coach Larry Fedora will be taking his Tar Heels to the Belk Bowl in Charlotte on Saturday, December 28th. The 2013 team qualified for bowl eligibility on November 23rd with a resounding win over Old Dominion—their sixth win of the season. The following weekend, a loss to Duke, gave the Heels a 6 and 6 record for the season.

The 1947 Carolina team finished their season with an 8 and 2 record, but didn’t go to a bowl.  Morton collection volunteer and blog contributor Jack Hilliard looks back to that season with an explanation as to why the ’47 Tar Heels were home for the holidays. 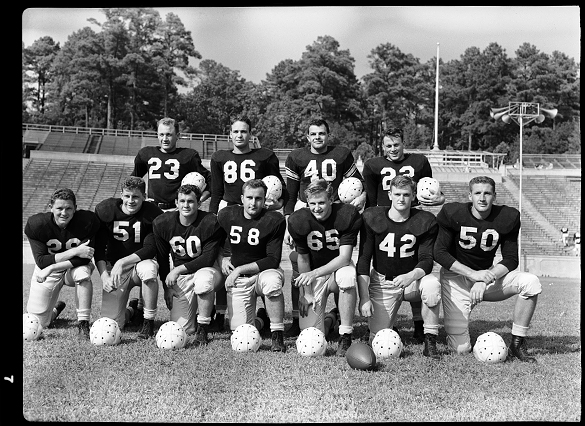 Many old time-Tar Heel-fans, as well as coaches and players from 1947, have considered the ’47 team to be the best of the “Charlie Justice Era” and there is good reason for that: as head coach Carl Snavely’s prepared for their second season with Justice on his team, there were high hopes for another Southern Conference championship.  UNC’s Sports Information Director Jake Wade, writing in the 1947 issue of Street and Smith Football Pictorial Yearbook, said “King Carl Snavely will have back almost all of his legions of doughty lads that showed their heels to the pack last autumn.”

The ’47 season got underway on September 27th when head coach Wally Butts brought his Georgia Bulldogs to Chapel Hill for a rematch of the Sugar Bowl that had been played about nine months earlier, which Georgia won 20 to 10.  On this September afternoon, however, the Tar Heels came away with a 14-to-7 victory thanks to the passing of Walt Pupa and the catching of Bob Cox and Art Weiner.  The 1947 football season was off to a good start. 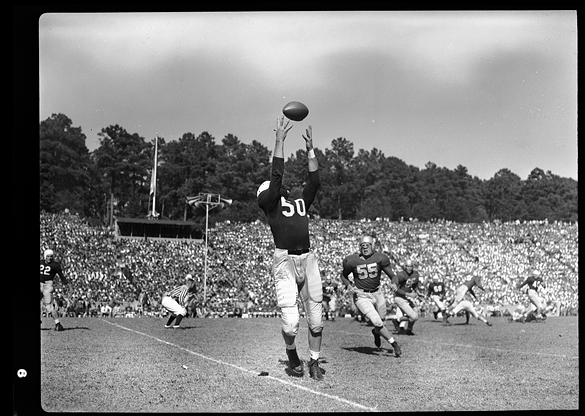 Saturday, October 4th was a hot day in Texas—86 degrees to be exact—and the Tar Heels were dressed in those dark Navy shirts. 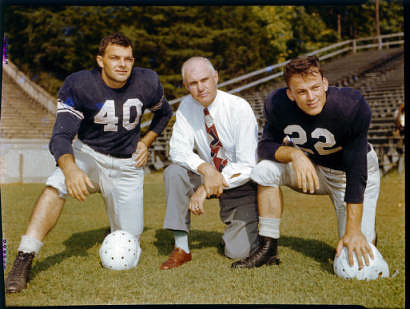 The only thing hotter than the Texas sun was the Texas team.  Layne was as good as advertised as he led the Longhorns to a 34 to 0 win before 45,000 fans.  It was the worst Tar Heel defeat since a loss to Pennsylvania 49 to 0 in 1945.  In a 1992 interview, UNC All America End Art Weiner said, “I got so tired of hearing their band play “The Eyes of Texas are upon You.”  (An interesting side note: One of Texas’ 2nd quarter touchdowns was scored by Tom Landry.  He would become a hall of fame coach for the Dallas Cowboys).  Some 2,000 Tar Heel fans, along with the band and cheerleaders, met the team at Woollen Gym on Sunday night at 7:40 as they returned home from Texas. The theme was upbeat and everyone looked forward to the Wake Forest game coming up in six days.

Wake came into Chapel Hill primed and ready, and took up where Texas left off the weekend before.  When the dust settled, Wake had beaten Carolina 19 to 7.  The only Tar Heel bright spot was Justice’s punting average: 51.5 yards per kick.

When the 1946 season ended, Carolina was ranked number 9; when “Peahead” Walker took his Demon Deacons out of Chapel Hill on October 11th, 1947, the Tar Heels had dropped out of the top 20 and two tough road games were just ahead. 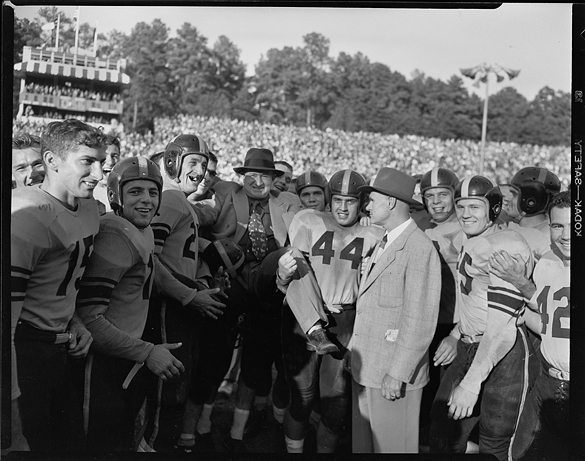 The largest crowd in William and Mary football history to date packed Cary Field on October 18th for the game between the Indians (now they are called “The Tribe”) and the Tar Heels.  The 20,000 fans were treated to a close game that was tied 7 to 7 after three quarters.  Walt Pupa’s 1-yarder in the 4th quarter gave Carolina the win 13 to 7.

Next it was a train ride to Gainesville and a homecoming appointment with the University of Florida.  On October 25th, Hosea Rodgers was brilliant, throwing three touchdown passes and running a 76-yard dash.  Overall Rodgers amassed 245 yards and Carolina came away with a 35 to 7 rout.  The Tar Heels were back on track, and Tennessee was coming over the mountains to Chapel Hill in a week.

The game with Tennessee on November 1, 1947 put Charlie Justice back in the spotlight. “Choo Choo” was involved in all three of Carolina’s touchdowns as the Tar Heels beat the Volunteers 20 to 6.  The game also provided photographer Hugh Morton the opportunity to take one of his most-famous and most-reproduced pictures. Morton even entered the picture in a photo contest. The win put Carolina back in the top 20 at number 18. 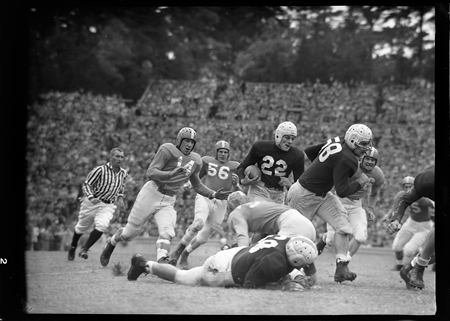 UNC didn’t play NC State in 1944, ’45, or ’46—and neither team was happy about that.  In a 1992 interview, Charlie Justice recalled that there was a rumor going around in late 1946 that the legislature was going to pass a law that the two had to meet each season.  I don’t know how true that rumor was, but the series was back on for 1947, a game originally scheduled to be played in Raleigh’s Riddick Stadium; at State’s request, however, the schools agreed to move the game to Kenan Stadium because it had more seats.  On November 8th, 40,000 fans packed Kenan for UNC’s homecoming.  Carolina’s famous ground game from 1946 returned and the Tar Heels gained 376 rushing yards in a 41 to 6 blowout.  The final two road games of the ’47 season were just ahead.

Fog, rain, snow, and mud greeted the Tar Heels for the 1947 Maryland game played in Washington’s Griffith Stadium on November 15th.  By game time the field was described as a quagmire.  The weather was so bad that Coach Carl Snavely kept his players in the locker room just as long as he could.  Snavely’s concern for his players gave photographer Hugh Morton another opportunity to take yet another classic image.  The picture of Walt Pupa and Charlie Justice in the locker room before the game has been reproduced dozens of times over the years.  Ironically it would be Pupa and Justice that would lead the Tar Heels to a 19 to 0 victory before 22,251 rain-soaked fans.  Maryland Head Coach Jim Tatum’s high-scoring Terrapins were not so high-scoring on this day.  There was no “fear of the turtle.”  The Tar Heels were on a five game roll, ranked 13th, and were headed for a showdown in Durham. 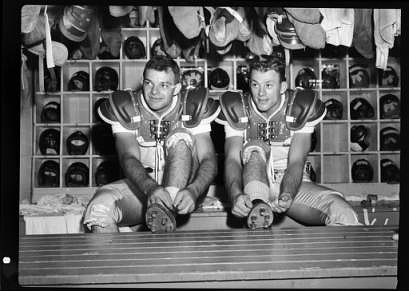 UNC fullback Walt Pupa (L) and UNC Tailback Charlie Justice in the locker room at Griffith Stadium, Washington DC prior to the 1947 game versus the University of Maryland.

On November 22nd, 56,500 fans packed a wet Duke Stadium (now it’s Wallace Wade Stadium) for the 34th Carolina–Duke game. The rain stopped just before 2 PM and the opening kickoff. After a scoreless first quarter, it was “The Charlie Justice Show” as he scored two touchdowns and passed for a third to make the final score 21 to 0.

Following the Tar Heel win, there was talk in the air about a bowl game and the most logical choice would be the Orange Bowl in Miami for a game against Georgia Tech.  Carolina students paraded around the stadium carrying a life size display with the words “Snavely Goes Bowling.”  But on Friday evening, November 28th, the Orange Bowl committee announced its choice and the Jackets’ opponent would the University of Kansas on New Year’s Day. But what about Carolina? They were now up to number 10 in the rankings and Kansas was 13. When confronted, the committee said they wanted “a high-powered offensive team.”  The next day, November 29th, Carolina met Virginia in the season finale. CBS play-by-play announcer Red Barber, who is also the official announcer for the Orange Bowl, was in Chapel Hill for the UVA game and had planned to interview the team about an Orange Bowl invitation.  A surprised Barber said, “I have no idea what took place in their meeting in Miami.”  40,000 thousand fans jammed into Kenan Stadium and saw Charlie Justice have another field day, gaining a total of 279 yards in a 40 to 7 win.  Talk about your high-powered offense!  [Editor’s note: And the score of the 1948 Orange Bowl? Georgia Tech 20, Kansas 14.  Kansas has 235 total yards offense, to Georgia Tech’s 204.]

Following the Virginia win, Carolina got several minor bowl invitations, including one from the Legion Bowl that was to be played in Los Angeles, but the University turned down the invitations. In a statement on November 30th, Chairman A.W. Hobbs of the University faculty athletic committee said the team had gone through a long, hard season and the committee thought it best to reject the Los Angeles offer as well as several minor bowl bids.  The trip would have meant final exams for the team members would have to be set ahead.  Here is part of Chairman Hobbs’ statement:

“The University appreciates the many invitations but feels compelled to decline them due to the fact the team has just completed a difficult schedule . . . and we feel it would not be in the best interest of the football squad to prolong the season.”

Charlie Justice in a 1984 interview said the team voted to reject the bids as well, adding that several of the players were World War II vets and they hadn’t been able to be home for Christmas since 1941.

When the final rankings came out for the 1947 season UNC came in at ninth, receiving seven first place votes.  They closed out the season with a seven-game winning streak . . . and were home for the holidays.