When Carolina lost three ACC games in a row early this season, some Tar Heel fans started looking back over their shoulders at that dismal 2001-2002 season.  Coach Williams and the 2013-2014 Heels righted the ship and won 12 in … Continue reading →

When Carolina lost three ACC games in a row early this season, some Tar Heel fans started looking back over their shoulders at that dismal 2001-2002 season.  Coach

Williams and the 2013-2014 Heels righted the ship and won 12 in a row before dropping the final game of the season to Duke; and then came a disappointment at the ACC Tournament quarterfinals with a loss to ACC newcomer Pittsburgh.  Morton volunteer/contributor Jack Hilliard looks back at that ’01-‘02 season . . . a season most Tar Heels would just as soon forget.

One Tar Heel I will never forget is Bill Richards.  Bill passed away two years ago on March 18th while watching the Tar Heels play their “Sweet Sixteen” game against Creighton in the NCAA tournament.  In addition to being an avid UNC football and basketball fan, Bill was the senior digitization technician in the library’s Digital Production Center.  In 1982, Bill was the Chief Photographer for the Chapel Hill Newspaper,  In 1988, he began working as a photographer and graphic designer in the UNC Office of Sports information.  He began working in the Library Photographic Service  in 1998, but continued working for Sports information into the 2000s. Today’s post is dedicated to Bill.

This year’s Tar Heel fans will still have their dose of Madness: UNC made the NCAA Tournament as the 6th seed in the East. 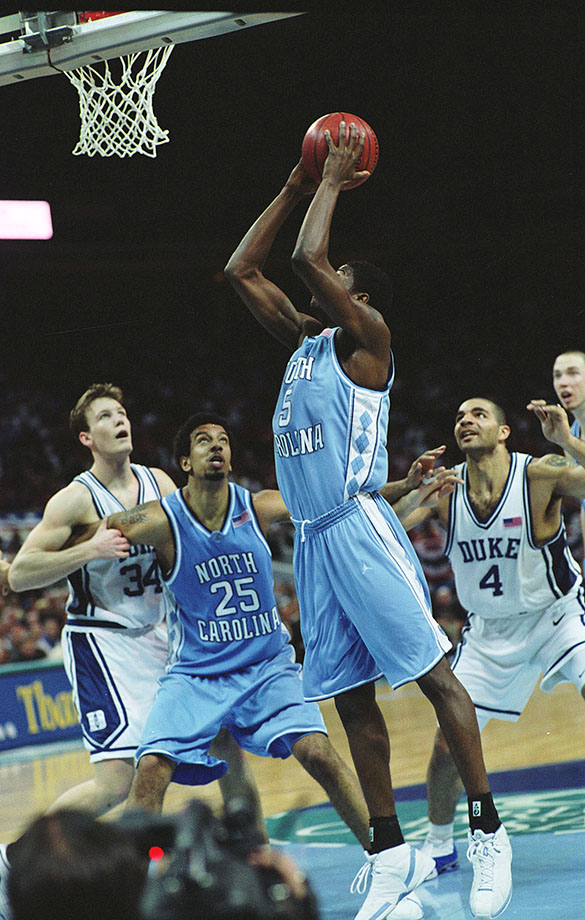 Jackie Manuel (UNC, #5) shooting during the quarterfinals match-up in the 2002 ACC basketball tournament between UNC-Chapel Hill and Duke at Charlotte Coliseum. Jason Capel (UNC, #25) boxes out Duke’s Mike Dunleavy (#34), while Carlos Boozer (#4) awaits a possible rebound. Duke won the game 60 to 48. Boozer and Dunleavy are currently teammates and active players for the Chicago Bulls in the National Basketball Association.

On Friday, November 16, 2001, there were reasons to celebrate on the UNC campus.  The basketball program signed three of the top high school players in the country.  (Raymond Felton, Rashad McCants, and Sean May would lead the Tar Heels to a national championship in 2005.) The “Charlie Justice Era” players were in town for a reunion and would dedicate the “Charlie Justice Hall of Honor” in the Kenan Football Center and were honored guests at halftime of the UNC-Duke football game on Saturday, November 17th,  a game in which Head Coach John Bunting’s Tar Heels beat Duke 52 to 17.  Head Basketball Coach Matt Doherty’s 20th ranked 2001-2002 Tar Heels were scheduled to open the season in the Smith Center with a game against Head Coach Steve Merfield’s Hampton University Pirates, and that game would mark legendary “Voice of the Tar Heels” Woody Durham’s 1,000th basketball broadcast on the Tar Heel Sports Network.

With all of that going on, the sports headline in Saturday’s Greensboro’s News & Record read in large bold type:

Hampton, a team that had been picked to finish third in the Middle-Eastern Athletic Conference (MEAC), beat the Tar Heels 77 to 69. Carolina led only once at 2 to 0, attempted 34 shots from the 3-point line but made only 6, and couldn’t handle the Pirates’ packed-back zone.  It was just the second loss in a home opener since the 1928-29 season for Carolina.  To give Hampton due credit, the Pirates went on to compile a 26-7 record, finishing as the 2001-2002 MEAC regular season champions.  They won the MEAC Tournament and were selected as the 2002 National Black College Champions.  To cap off their successful season, they earned the 15th seed in the East bracket of the Division 1 NCAA Tournament.  Hampton lost their first-round contest to Connecticut—who made it all the way to the NCAA final, only to lose to the ACC’s Maryland.

When Davidson came to town four days later, things didn’t get much better and then a loss to Indiana on November 28th in the ACC – Big 10 Challenge and the Tar Heels had set a record three game losing streak to start the season—all at home.  Finally, on December 2nd Carolina beat Georgia Tech in the Smith Center 83 to 77 with a trip to Kentucky looming in six days.

Defeated by twenty points in Lexington at Rupp Arena, Tar Heel fans were at a loss.  What was wrong?  When a one-point-win came on December 16th against Binghamton, Tar Heel fans said OK we regroup at the Tournament of Champions in Charlotte.  Well, not really.  On December 21st, College of Charleston handed the Tar Heels an opening round loss 66 to 60 but the following night, Carolina came back with a win against St. Joseph’s.  That win was followed by two more wins, against North Carolina A&T and Texas A&M.  OK . . . a three game winning streak.

What followed was new territory for Tar Heel fans. From January 5, 2002 until January 23rd, Carolina lost six games—five of them ACC games and a 32-point loss at Connecticut.

On January 27th Carolina beat Clemson on the road—one of only two road wins all season.  Next came five more ACC losses before a home win against Florida State on February 17th.  Ten days later, Carolina won its final game of the 2001-2002 season, a game against Clemson in the Smith Center.

The final two games of the season were both against Duke: a loss in Cameron and a loss in the first round of the ACC Tournament in Charlotte.  The season was finally over . . . no NCAA . . . no NIT . . . it was over and was a record-setter.

Finishing seventh in the ACC was the lowest ever for a Carolina team. Needless to say, there was no March Madness in 2002 (NCAA or NIT) for the first time since 1966 and there are no winning banners in the rafters of the Smith Center for 2001-02 season.

The headline writer at the News & Record could have recycled that “HEELS HUMBLED” headline from November 17th and run it again to close out a season most Tar Heel fans would like to forget.

Editor’s Note: Morton photographed several UNC basketbal games during the 2001-2002 season, but the only photographs in the online collection are images from the Duke versus UNC games in 2002.  See the collection finding aid for a more complete listing.