On this day, May 18, 2014, UNC’s great All America football player, Charlie “Choo Choo” Justice, would have turned 90 years old.  Justice was magical on the football field during the seasons 1946 through 1949 and that magic continued in … Continue reading →

On this day, May 18, 2014, UNC’s great All America football player, Charlie “Choo Choo” Justice, would have turned 90 years old.  Justice was magical on the football field during the seasons 1946 through 1949 and that magic continued in his life after football.  He has been featured in many posts here at A View to Hugh, and currently there are ninety-nine images in the online collection of Hugh Morton photographs that include or relate to Charlie Justice.  Morton Collection volunteer and blog contributor Jack Hilliard looks at how the magic has evolved—and continues still. 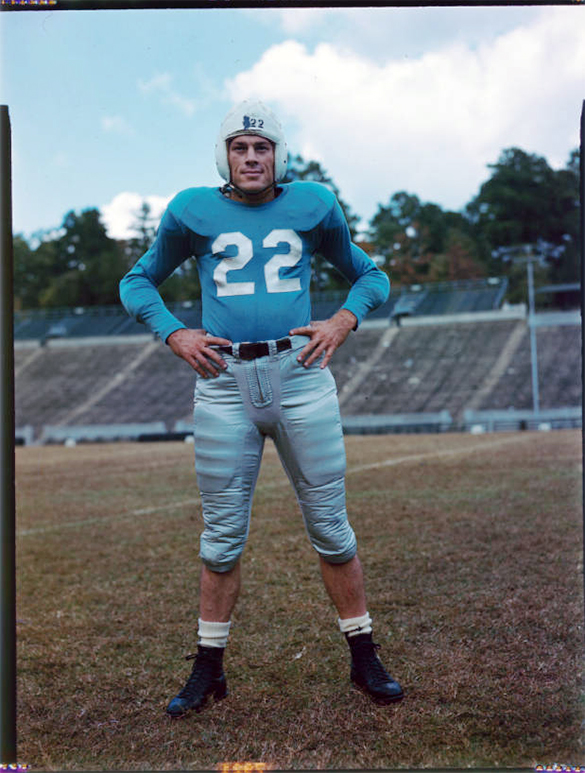 When UNC’s classes of 1949 and 1950 held their respective 50th reunion celebrations in 1999 and 2000, they replicated their senior yearbooks, Yackety Yack.  As part of the yearbooks, the reunion committees sent out questionnaires and asked the question, “What experience, event, place or time during your years at Carolina brings back particularly fond memories?”  Of the 315 graduates who responded to the question, 126 mentioned the football team and 70 others mentioned Charlie Justice by name.

As part of the graduation ceremony on May 21, 2000, Charlie Justice was awarded the University’s highest honor, the degree of Doctor of Laws.  The award citation contains the following quote from Charlie’s dear friend Hugh Morton:

No person will ever know the benefits that have come to our University as the result of the loyalty which Charlie Justice kindled in thousands of our alumni.  The best thing about Charlie Justice, however, and the reason he deserves this honor, is that he has been a model citizen since college.  He has contributed his fame to hundreds of drives and worthy causes and has generally and consistently served as a wholesome example to impressionable youth.

Due to his declining health, Justice was not able to attend the graduation ceremony, but his Tar Heel teammate Paul Rizzo accepted the honor for him.

In 1999, forty-nine years after he played his final varsity game as a Tar Heel, Charlie Justice was honored as “athlete of the century at UNC,” by readers of The Daily Tar Heel.  Ten years later in 2009 he was declared the “Mount Rushmore of Tar Heel Football” by ESPN and was inducted in the inaugural class of the Southern Conference Hall of Fame.
Two days after Justice’s 70th birthday, on May 20, 1994, Ron Greene, Sr., writing in The Charlotte Observer, said, “None has worn the mantle of hero more gracefully. . . . His name remains magic.”

Thirty-seven seasons had come and gone since UNC freshman Justice led his Tar Heels over Navy 21 to 14 in Baltimore Stadium on October 19, 1946; however, when Navy came into Chapel Hill on September 15, 1984, the Midshipmen’s radio network had only one request of Carolina Sports Information Director Rick Brewer.  They wanted Charlie Justice as a halftime guest.

Hugh Morton and Ed Rankin, in their 1988 book Making a Difference in North Carolina, included the following quote from Legendary Tar Heel broadcaster Woody Durham:
“In all my associations in sports over the years, I have never known a person to wear the mantle of fame any better than Charlie Justice has. His story to me is one of the most amazing stories in all of sports when you think about the fact that it was 40 years ago when he achieved the stardom that he did, and today his name is still magic.”

Author Bob Terrell, in the 2002 edition of his Justice biography All Aboard: The fantastic story of Choo Choo Justice and the football team that put North Carolina in the big time! says, “Charlie Justice became a legend because of talent but also because of character and sportsmanship.”

In 1950, after his magical four years at Carolina, Charlie wanted to offer some kind of payback to his University, so he took a job with his friend and admirer Billy Carmichael at the North Carolina Medical Foundation.  At the time, the Foundation was raising money to complete North Carolina Memorial Hospital. (That would be accomplished the following year).  During his time at the foundation, Justice was pursued by George Preston Marshall of the Washington Redskins.  At one point Marshall offered to send Justice a signed, blank check.  “Fill in the amount,” he told Charlie.  But Justice turned down the offer, saying he owed his University.  Justice later joined the Redskins, but for a modest salary.

On the weekend before the 1979 football season kicked off, Tom Northington of the Greensboro Daily News interviewed Justice in his Greensboro office.  Justice talked about how the game had changed during the 30 years since he played his final season as a Tar Heel.

“Something is missing,” said Justice.  “Team spirit is not what it once was, there’s too much of this ‘I’ thing, too much individualism.”

When Charlie Justice scored a touchdown, there were no “look-at-me” celebrations . . . no throwing the ball into the stands . . . no dunks over the goal post—and in those days, spikes were things that fastened railroad ties.  I recall a 60-yard Justice touchdown in the 1950 College All-Star game before 88,885 fans at Soldiers’ Field in Chicago.  After he crossed the goal line, he handed the ball to the official, and then trotted back up the field to shake hands with guard Porter Payne from the University of Georgia who had thrown the block that made the play possible.

On October 18, 1986 Charlie and Sarah Justice, along with some family members and friends, were in Kenan Stadium for a sold-out NC State game. As the group walked around the stadium other friends joined in and by the time they got up to the gate, Charlie realized he was one ticket short. At that point Justice could have made one of those signs that reads “Need One,” but Charlie didn’t do that.  According to UNC General Alumni President, Doug Dibbert, Justice “could have walked into the stadium without tickets or placed a call to any number of people who would have provided him tickets, but Charlie would never want to impose upon anyone.”  So, Charlie Justice made sure that all in the group got seated in section 19B, row AAA, and he then returned to the Carolina Inn and watched the game on TV.

On September 28, 1996 the actual 50th anniversary of the beginning of the “Charlie Justice Era” at Carolina, A.J Carr of Raleigh’s News & Observer, wrote a three-page profile of Justice.  Said Carr: “He walked humbly on campus but ran historically on the football field, lifting the spirits of a school, a town, and an entire region.”

Carr interviewed then UNC Chancellor Michael Hooker who said: “There was a quality of magic about his name as I was growing up.”

In 1949, the Christian Athletes Federation honored Justice for his “humility in the face many honors.”

The 1973 football season marked the 25th anniversary of the magical Tar Heel season of 1948, a season that saw the Heels ranked number one in the country for the first and only time—an undefeated season with wins over Texas, LSU, Tennessee, and Georgia plus wins over NC State, Wake, Duke, Maryland and Virgina.  Justice and Art Weiner were consensus All America with Justice as first runner-up for the Heisman Memorial Trophy and named national player of the year, and a team invitation to the Sugar Bowl on January 1, 1949 in New Orleans.

To celebrate that 25th anniversary, Ed Hodges did a Justice feature in the Durham Morning Herald on July 22nd.  In the piece, Hodges said, “he (Justice) has in some magic way interwoven the past with the present.”

Woody Durham, then Sports Director at WFMY-TV in Greensboro, presented a two-part Justice documentary on September 16th and 23rd. That program not only aired on WFMY, but was also broadcast on WRAL-TV in Raleigh.

And Ron Fimrite, writing in the October 15, 1973 issue of Sports Illustrated, described the reaction to the famous 43-yard Justice TD run in the ’48 Duke game:

(As Justice crossed the goal), a fan, in the temporary end-zone seats was so excited by the amazing run that he fell forward onto the field.  The crowd was alive, roaring, slapping each other.  Coach Snavely, normally an impassive man, rushed from the bench to grab Charlie by both shoulders and shake him. ‘Great,’ he kept saying. ‘Great.’  Charlie could hear only the cheers—‘Choo Choo, Choo Choo.  He knew then that for him they would never really stop.  And . . . they have not stopped.  They never will.

One of those 1950 graduates who responded to the revised Yackety Yack survey question back in 2000, Walter Hobson Kirk, Jr. from Durham, said it best: “Charlie Choo Choo Justice – accepting fame with honor and humility.”