On this day 62 football seasons ago, October 18, 1952, the UNC football team kicked off the 1952 season for a second time. Morton collection volunteer Jack Hilliard explains how that happened and how a series of unique events made … Continue reading →

On this day 62 football seasons ago, October 18, 1952, the UNC football team kicked off the 1952 season for a second time. Morton collection volunteer Jack Hilliard explains how that happened and how a series of unique events made the ’52 season unlike any other.

Many UNC football media guides, known as “blue books,” are available online. You can read the 1952 issue by clicking on the cover image.

When the February 4, 1950 issue of The State, with Duke Chapel pictured on its cover, arrived in Hugh Morton’s mailbox in Wilmington, his immediate reaction was to quickly supply publisher Carl Goerch an “equal-time” photograph from UNC.  The magazine printed Morton’s shot of the Morehead-Patterson Bell Tower on its February 25th cover.  In the early summer of 1952, when UNC Sports Information Director Jake Wade and his assistant Julian Scheer were preparing the ’52 football media guide (called a “blue book” in those days), they remembered Morton’s bell tower shot and decided to use it for the front cover of the ’52 guide.  Inside, Wade talked about UNC’s chances for the upcoming football season, and Head Coach Carl Snavely’s switch from the single-wing to the split T-formation.

Snavely said, “We lacked the speedy, shifty tailbacks, tough blocking backs and interfering linemen so vital to the single-wing.  We probably should have made the change a year ago.”  Smith Barrier, writing in the 1952 Illustrated Football Annual, picked up the Snavely quote and added that twenty lettermen from the 1951 team had graduated.

Carolina began the 1952 season without much fanfare.

On Saturday, September 27th, the Texas Longhorns came into Chapel Hill for the first time since that “never-to-be-forgotten” day in 1948 when the Tar Heels were victorious 34 to 7 in a game many Tar Heels to this day call the greatest Carolina win . . . ever. 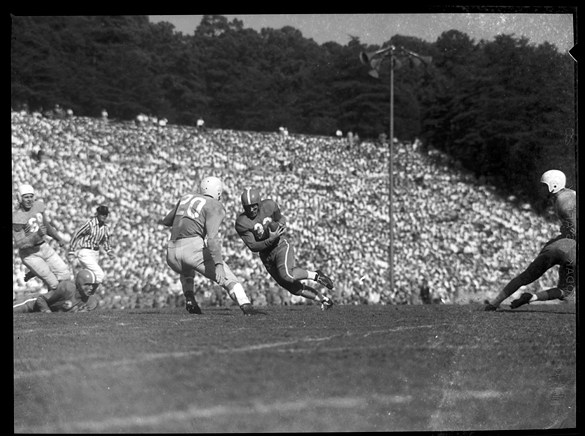 Dougal Cameron running for a touchdown, as UNC’s Billy Williams (20) sets up to attempt a tackle. This scan shows the full negative, which was tightly cropped on those two players in the photograph run the next day in Wilmington’s Sunday Star-News.

A sign hanging from Old East dorm read “Remember ’48,” but the events of September 25, 1948 were only a memory.  Irwin Smallwood, writing in the Greensboro Daily News, on Sunday, September 28th, said, “Carolina’s hopes of a repeat of that great ’48 victory over Texas . . . lasted exactly five plays—no more.”  Five plays into the game, Carolina fumbled.  Texas recovered and never looked back, posting a 28 to 7 victory.   40,000 cheering Tar Heels, led by new UNC Head Cheerleader Bo Thorpe, along with the Elizabeth City Marching Band, and with Tar Heel football great Charlie Justice in the stands, and UNC All America Art Weiner at Snavely’s side on the bench.  All that was not enough.

Next on the schedule was Georgia in Athens, but that encounter would never happen.

The front-page headline in the Greensboro Daily News on October 3rd read, “University Cancels Two Grid Contests as Polio Strikes.”  The games with Georgia and NC State were canceled when UNC fullback Harold (Bull) Davidson came down with polio. Four additional students, all athletes, came down with the disease. Daily Tar Heel editor, Barry Farber, said, “the news is very depressing, but the only sensible step the University could take.”

Down in Athens, Georgia Head Coach Wally Butts said, “we are very disappointed that our traditional game with North Carolina can’t be played.  We feel they were right to cancel the game under the circumstances.”

During the next two weeks, students were urged to stay on campus and long distant telephone calls to and from Chapel Hill doubled as students and anxious parents kept in touch.

So, on October 18th, it was time to kickoff the ’52 football season for a second time, with Wake Forest coming to town for the 49th meeting between the two schools, a series dating back to 1888. 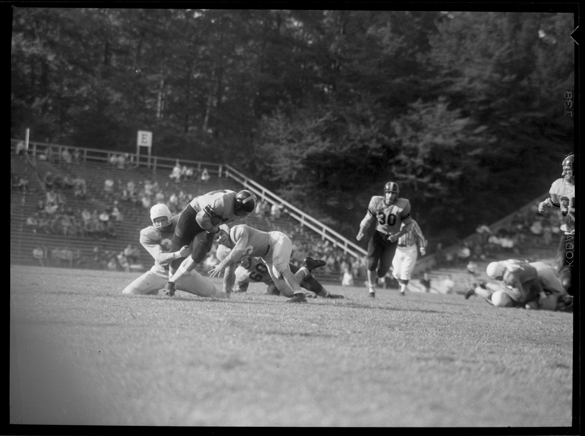 Despite losing 6 of 11 fumbles, the Tar Heels led Wake 7 to 6 with 1:16 left in the game.  But at that point Wake’s Sonny George kicked a game-winning- 22-yard field goal.  New mascot Rameses VIII and 30,000 Tar Heel fans left Kenan Stadium dejected.

Next it was on to South Bend and a fourth meeting with Notre Dame. This one turned out just as the previous three had been…a Tar Heel loss. This time it was 34 to 14.

This interesting side-bar story appeared in the Greensboro Daily News on October 30, 1952:

It may be bad . . . but really, it’s not all that bad.  Today (October 29th) Bo Thorpe reported to Coach Carl Snavely for football practice.  Snavely appraised his new candidate as very fast and shifty.  Thorpe is head cheerleader for Carolina’s Tar Heels, who have yet to win a game this season.

Time picked up the Thorpe story and ran it in its November 17th issue on page 132.

Here’s another interesting sidebar.  Henry Benton (Bo) Thorpe started his first band in 1978. He and his band played for five presidential and gubernatorial inaugural balls, the National Symphony Ball, the Kentucky Colonel’s Derby Ball and for the annual June German, a traditional dance held in Rocky Mount.  In all . . . at least 60 concerts a year.

For Carolina’s Tar Heels, a trip to Knoxville was next where they would be a three-touchdown underdog.  Only 22,000 fans turned out for the game that saw the Volunteers swamp the Heels 41 to 14. The losing streak, going back to October 13, 1951 was now at 10—longest among the nation’s major colleges. 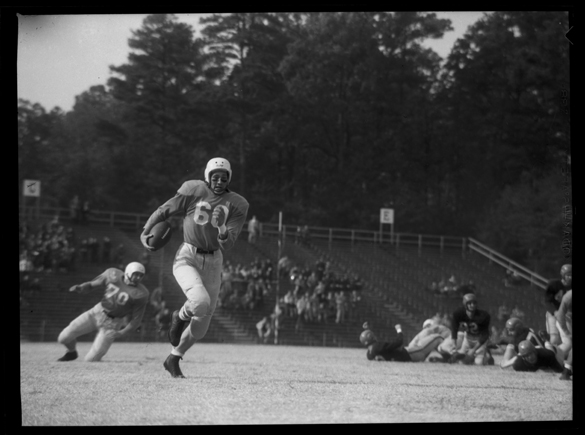 Len Bullock running for a 69-yard touchdown run versus the University of Virginia. This photograph, tightly cropped to focus on Bullock, appeared in Wilmington’s Sunday Star-News, 9 November 1952.

The University of Virginia was Carolina’s homecoming opponent on November 8, 1952.  Their trip to Chapel Hill would be their only out-of-state venture in ’52, and they obviously made it count…a 34 to 7 blowout.  A South Carolina homecoming game in Columbia was just ahead. 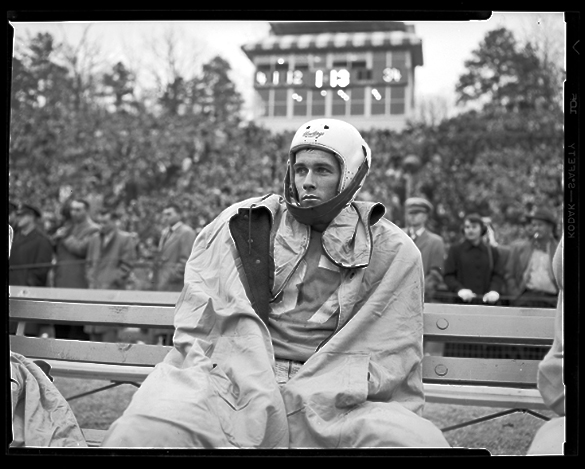 Flo Worrell, who starred in the South Carolina match-up, sits dejectedly during the UNC vs. Duke contest. A tightly cropped head-shot noting his new chinstrap was one of two photographs published in Wilmington’s Sunday Star-News—Worrell’s hometown newspaper.

UNC freshman Flo Worrell, who had played on Carolina’s junior varsity team most of the ’52 season, stepped up and led the Heels to a much-needed victory over USC, 27 to 19.  The losing streak was halted at 11 and Carolina fans looked forward to the traditional “battle of blues” slated for Saturday, November 22nd.

The weatherman promised 50-degrees and cloudy skies for the 39th meeting between Carolina and Duke . . . but he was wrong.  42,000 chilled fans saw Duke win the Southern Conference championship by shutting out the Tar Heels, 34 to 0.  Carolina was never in the game. 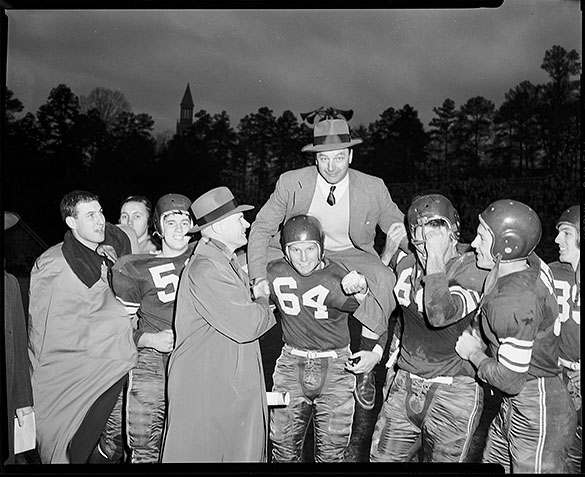 With one game remaining, the Heels were 1 and 6.  It had truly been a Tar Heel season out of focus.  In seven games Carolina had scored five times on the ground and six times through the air—a total of eleven touchdowns. (In 1948, Charlie Justice personally scores 11 times in 10 games and passed for 12 more touchdowns).

The final game of the 1952 season was a Friday night affair in Miami’s Orange Bowl against the Miami Hurricanes.  20,222 fans came out and saw Carolina play its best game since a 40 to 7 win over William & Mary in October of 1950. During a 13- minute span in the second quarter, Carolina scored 27 points.  The Alumni Review headline read, “34-7 Win Over Miami Provides Pleasing Finale.”

The University Athletic Council met at 8 PM on December 2 to decide the fate of Head Coach Carl Snavely.  The coach had turned in his letter of resignation earlier in the afternoon.  After 2 hours of discussion, the council accepted the resignation.  Dean A.W. Hobbs, Chairman of the Council said, “The Council wishes to go on record as appreciating sincerely the fine services that Mr. Snavely has rendered the athletic association at the University of North Carolina.”

Carl Snavely left Chapel Hill in early 1953 and would not return to the campus until the “Charlie Justice Era” reunion during the weekend of October 29-31, 1971.

The good news from Chapel Hill in late 1952 was that new Head Basketball Coach Frank McGuire won his first game with the Tar Heels…a 70 to 50 win over The Citadel on December 1st.