On March 18th, 2012 Bill Richards, a colleague who worked in the library’s Digital Production Center passed away unexpectedly while watching the Tar Heel’s basketball team defeat Creighton University in the “Sweet Sixteen” round of the NCAA Men’s Basketball Tournament.  … Continue reading →

On March 18th, 2012 Bill Richards, a colleague who worked in the library’s Digital Production Center passed away unexpectedly while watching the Tar Heel’s basketball team defeat Creighton University in the “Sweet Sixteen” round of the NCAA Men’s Basketball Tournament.  In 1982, Bill was the Chief Photographer for the Chapel Hill Newspaper.  In 1988, he began working as a photographer and graphic designer in the UNC Office of Sports information.  In 1998 he started working in Library Photographic Service, but continued shooting for Sports Information into the 2000s. I am dedicating this blog post, as I have each year since his departure, to Bill who, like Hugh Morton, was an avid UNC basketball fan.

As many also know, Dean Smith, UNC’s revered basketball coach, passed away in February.  Hugh Morton’s last photographs made at an NCAA tournament were of Dean Smith’s final press conference after UNC’s 1997 tournament semifinal loss to Arizona in Indianpolis.

In advance of tonight’s Sweet Sixteen match-up between UNC and Wisconsin in Los Angeles, today’s blog post looks at Morton’s many trips to the NCAA’s Men’s Basketball Tournament. 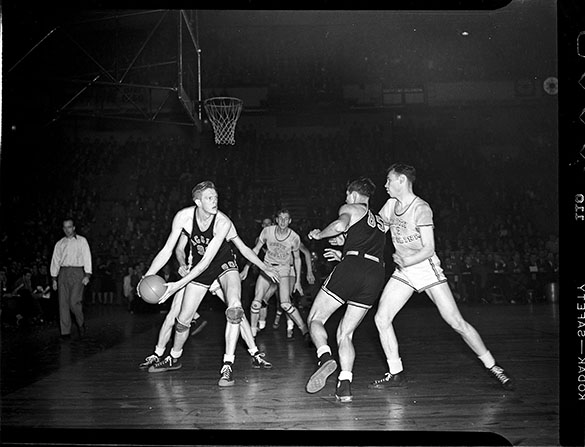 This is one of Hugh Morton’s photographs from his first NCAA Men’s Basketball Tournament, the 1946 championship game between UNC and Oklahoma A&M, played in Madison Square Garden in New York City. On the court from Oklahoma A&M are #90 Bob Kurland and #85 Sam Aubrey. From North Carolina are #4 Bob Paxton, #13 John “Hook” Dillon, and Bones McKinney (only arms and legs are visible). The Aggies won 43–40.

Here’s an interesting factoid from Obscurityville: photographer Hugh Morton was a UNC freshman when the NCAA held its very first men’s basketball tournament in March 1939.  Clemson defeated Maryland in the 1939 Southern Conference Tournament; it was Wake Forest, however, with the conference’s best regular season record that the NCAA selected for its eight-team national championship tournament. Wake Forest lost its opening-round game to Ohio State, 64–52.

There was no representative from the Southern Conference in the NCAA tournament the following year.  In 1941, UNC lost to Duke in the Southern Conference Tournament, but the NCAA nonetheless selected the “White Phantoms” (the UNC basketball team’s nickname) for its first trip to the national tournament—the only team selected from the twelve southeastern states.  During the regular season UNC had posted a 14–1 conference record and were 19–9 overall.  UNC’s NCAA tournament appearances that year were of two extremes.  They lost 26–20 to Pittsburgh in their opening game played in Madison, Wisconsin.  The Yackety Yack yearbook copywriter called it UNC’s “worst exhibition of the year.”  The Yack writer then described UNC’s following night performance in the Regional Third Place game as “a sterling display of southern basketball in losing to Dartmouth, 60–59, in the last few seconds.”  All-America George Glammack scored 31 points.

In 1942, Morton’s last year as a UNC student, Duke captured the Southern Conference crown.  A series of three blog posts on A View to Hugh recounted Morton’s extensive coverage of that tournament. The NCAA did not select Duke, however, as one of the eight tournament teams.  In 1943, in what would have been his senior year, Morton was instead a private in the United States Army.

Not until 1946 did a Southern Conference team return to the NCAA tournament.  UNC took that honor all the way to the championship game in Madison Square Garden.  With his photographic skills now honed by his military experience in the 161st Signal Corps,  Hugh Morton photographed the championship matchup, which the Tar Heels lost to Oklahoma A & M 43–40.

Eleven more years transpired before the Tar Heels’ next appearance in the NCAA tournament in 1957.  Coach Frank McGuire led UNC to an undefeated season and the national title in the basketball season that became known as “McGuire’s Miracle.”  Morton did not attend UNC’s games during that tournament, but he did photograph the team’s return at the Raleigh-Durham Airport.