In recent times, the volcano of American student loan debt has been casting a tall and ominous shadow over the neatly trimmed lawns of American universities. Like a room of frantic volcanologists in the opening scenes of a disaster film, … Continue reading →

In recent times, the volcano of American student loan debt has been casting a tall and ominous shadow over the neatly trimmed lawns of American universities. Like a room of frantic volcanologists in the opening scenes of a disaster film, voices from across the country have forecast a cataclysmic eruption of student loan debt due to the exponential increase in the cost of attending college.

But, like all volcanoes, the rising cost of higher education did not become a problem overnight. Below are some insights on the issue given roughly half a century ago by former UNC President, William C. Friday, during a Board of Trustees Meeting on February 25, 1963, regarding raising tuition to fund the construction of new dormitories: 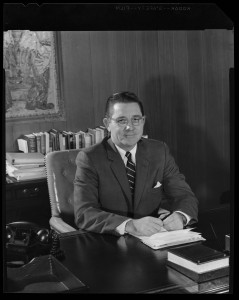 I feel I must point to the full significance of the continuing inflationary trend in the cost of going to college […] But it is a certainty that a public state university goes against one of the cardinal principles of its constitution if it shifts a disproportionate percentage of cost to the individual student. It should never be that the effective criterion of admissibility to the state university becomes a test of financial means. We are tending that way, and every increment of cost aggravates the tendency [….]

Building on this idea, President Friday makes the observation that:

State-supported institutions are erected and maintained by the public for the purpose of making higher education accessible to the rank and file of citizens. To perform this function, they must keep the doors open to students of all economic classes. Already, I fear, we have reached the point in the threefold University where many students, upon learning the cost of tuition and fees, room and board, and books and other essentials, immediately conclude that the state University is becoming too expensive too attend.

Tuition rates have continued to rise in the years since, and in 1982, Bill Friday again raised the alarm over America’s student loan crisis. According to the 1962-1963 UNC Chapel Hill catalog, the in-state tuition of a full-time undergraduate student during the 1962-1963 academic year was $87.50 per semester (adjusting for inflation, equivalent to $671.18 today). For the academic year of 2014-2015, a semester’s tuition for the same student would be $3211.50.

When faced with these numbers, one may wonder: will higher education as a whole suffer the same fate as Pompeii? Only time will tell. All that can be said for certain is that if the eruption does happen, the resulting explosion won’t be as abrupt as the one that shook Rome long ago. As William C. Friday confirmed 50 years ago, the student loan problem is a volcano that has been quietly erupting one undramatic day at a time.