Carolina will kick off its 2015 home football schedule on Saturday, September 12th when Head Coach Rod Broadway brings his North Carolina A&T Aggies to Kenan Stadium.  It will be the first meeting between the two schools on the gridiron; … Continue reading →

Carolina will kick off its 2015 home football schedule on Saturday, September 12th when Head Coach Rod Broadway brings his North Carolina A&T Aggies to Kenan Stadium.  It will be the first meeting between the two schools on the gridiron; the men’s basketball programs, however, have met on the hardwood twice (in 2001 and 2003).  Morton Collection volunteer Jack Hilliard takes a look back at those two meetings. 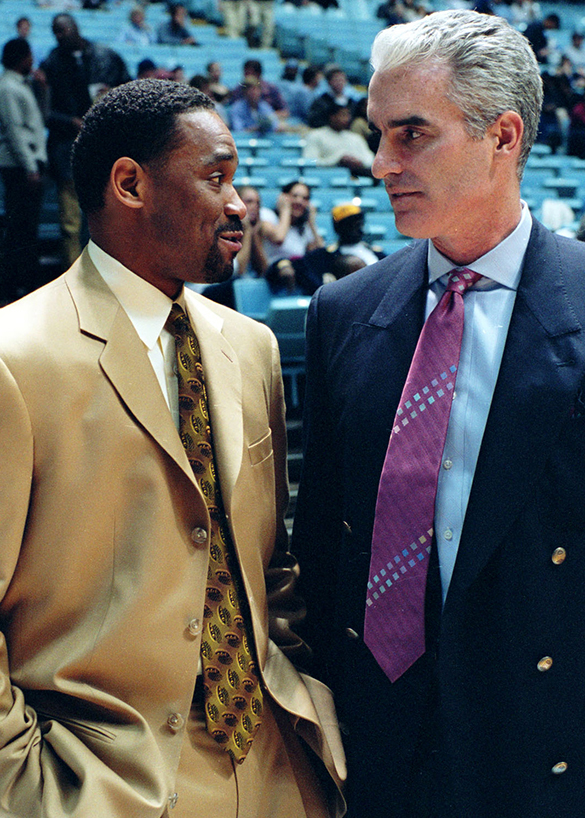 Curtis Hunter and Matt Doherty, teammates on the UNC 1982-83 and 1983-84 basketball teams, chat as coaches before their teams—North Carolina Agricultural and Technical State University and University of North Carolina at Chapel Hill—faced off on February 18, 2003 at UNC’s Smith Center. Another photograph of the former Tar Heels talking court-side can be found in the online collection of Morton photographs.

Curtis Hunter and Matt Doherty were teammates on UNC Head Basketball Coach Dean Smith’s 1982-83 and 1983-84 teams.  In 2000 each took a head coaching position with teams within the UNC system: Hunter at North Carolina Agricultural and Technical State University and Doherty at University of North Carolina at Chapel Hill.  As was the custom then, and still today, members of the “Carolina Family” often wind up playing each other.  And that was the case with the Tar Heels and the Aggies.  When the two teams met twice in the Smith Center during the early 2000s, photographer Hugh Morton was there on both occasions to document the games.

It was a homecoming of sorts for North Carolina A&T Head Coach Curtis Hunter on December 27, 2001 when he brought his Aggies into the Smith Center to meet coach Matt Doherty’s Tar Heels.  But Hunter realized that his homecoming would need to take a back seat to getting his 1 and 7 team ready to play Doherty’s 3 and 5 Heels.

In a pre-game interview, Hunter said, “To be honest about it, I hadn’t given (coming back to play at UNC) that much thought.  It really hasn’t hit me yet.  Maybe that will all change once the game starts.”  Just minutes before the tipoff, Hunter did notice an old friend seated close by and went over and offered a long embrace.  It was Angela Lee, wife of former Chapel Hill Mayor Howard Lee.  When Curtis played for the Tar Heels, Angela worked in the basketball office. 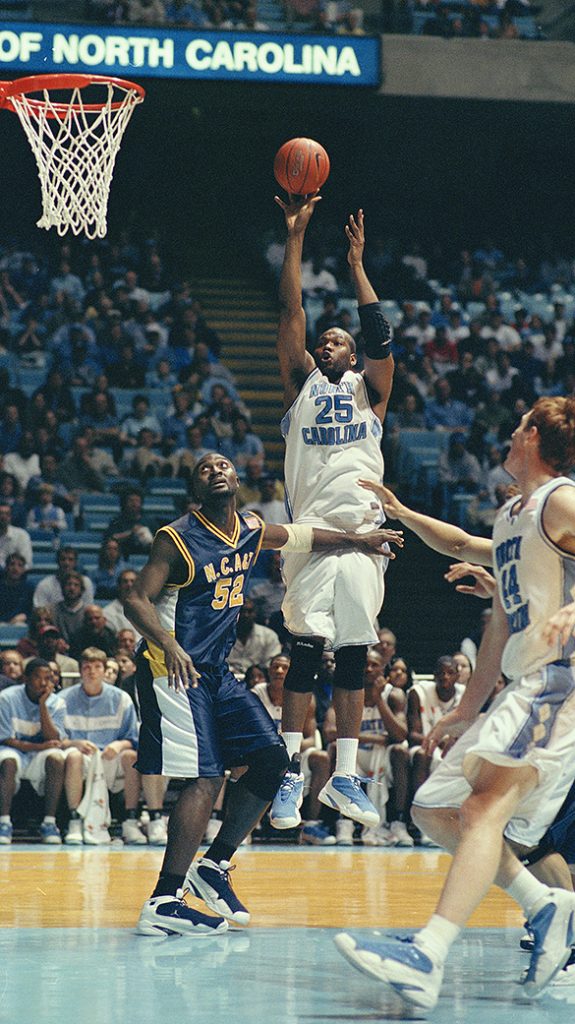 Game-action photograph by Hugh Morton (cropped by the editor) from the 2001 UNC vs. NC A&T contest. Who are the players in the photograph? Please leave a comment below if you know!

With former UNC head coaches Dean Smith and Bill Guthridge looking on, it didn’t take long for all to see that the Tar Heels had brought their A-game.  They led 52 to 31 at the half and equaled that 52 in the second half with a final score of 104 to 66.  Tar Heel senior Jason Capel led the way with 26 points.  In all, Carolina hit 16 three-point shots—one off the school record and two short of the ACC record at the time.  A&T hit only 37.9 percent from the floor and committed 18 turnovers. In his post game interview, Hunter said, “All I know is that we just got beat by 38 points.  So, it’s up to me to come up with ways to help my team play up to its capabilities.” 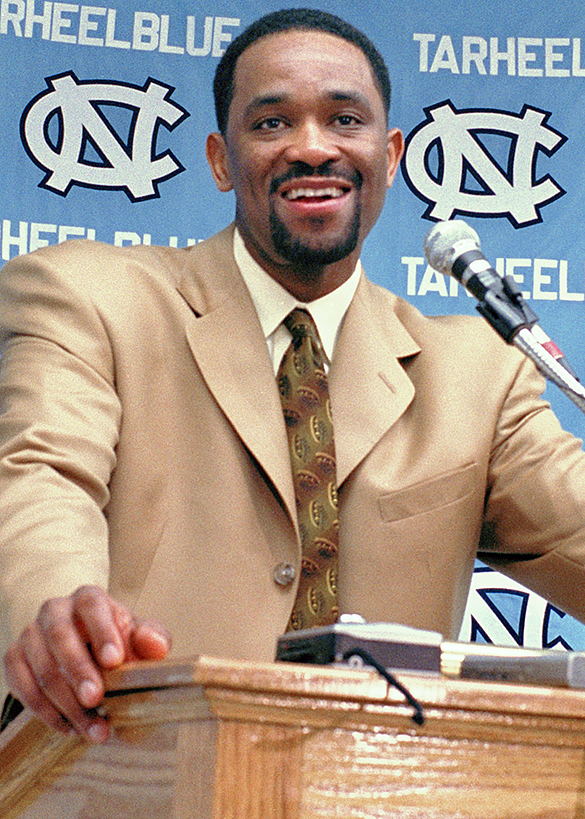 But wait . . . Curtis Hunter appears to be wearing the same suit and tie in this photograph as he is in the opening photograph, which we have dated as 2003. Is that a coincidence, planned or otherwise, or was the opening photograph also made in 2001? This image, which is not in the online collection, is from a negative envelope with the following identifying information: UNC vs. NC A&T (plus event at Friday Center Institute; 1 roll), December 2001. There are five basketball images: two game photographs followed by three podium images. Another Morton mystery is at hand!

While Coach Doherty was pleased with his team’s win, he admitted that beating a former teammate in a blowout is not all that gratifying.  “After the game I said to him, ‘Sorry you caught us on a bad night.’  A month ago it could have been a different story.”
Coach Hunter was asked one final time about his homecoming.  “It still hasn’t hit me yet,” he replied.  “Maybe that will happen next year.”

That “next year” would be February 18, 2003.  The second meeting between UNC and A&T didn’t offer coach Curtis Hunter a happy homecoming either.  His team was winless going into the game, having lost 20 games, while Carolina was 13 and 11.

The Tar Heels took control early and wound up hitting 54 per cent over all.  A&T hit 4 threes and had an overall percentage of 34.9. The Greensboro News and Record described the Carolina effort as a “dunk-a-thon,” adding that they also hit 11 three-point shots.  The final score was UNC 93, A&T 57.

In his post-game interview, Coach Doherty said, “I’m sorry it had to be Curtis Hunter, my old teammate, on the other bench. I have a lot of respect for him.”

1792 The University's Board of Trustees met in Hillsborough to nominate potential sites for the new university.