The basketball rivalry between the University of North Carolina at Chapel Hill and Duke University is one of the most contentious and well-known in America. One of the earliest and fiercest displays of this rivalry was an on-court fight on … Continue reading →

The basketball rivalry between the University of North Carolina at Chapel Hill and Duke University is one of the most contentious and well-known in America. One of the earliest and fiercest displays of this rivalry was an on-court fight on February 4, 1961. It was at this UNC-Duke matchup that UNC players Larry Brown and Don Walsh and Duke player Art Heyman started a bench-clearing brawl. It has been suggested that some of the hostility between Brown and Heyman may have resulted from having played against each other in high school. Heyman had also committed to attending UNC before changing his mind and enrolling at Duke.

In attendance at this game was James H. Weaver, Commissioner of the Atlantic Coast Conference, the athletic conference to which both schools belonged. In a letter found in the files of then-chancellor William B. Aycock, Weaver reacted to the fight. He criticized the behavior of students in the crowd, calling them “juvenile delinquents” who

amuse themselves by tossing articles onto the playing floor, booing officials, booing visiting players while they are attempting foul shots, and at the same time, eagerly awaiting any opportunity to rush onto the court and further display their total lack of maturity.

Commissioner Weaver pointedly warned that though the three players primarily involved in the altercation were young and at the beginning of their careers, “sophomores must be made to realize that they too can cause riots.” As a result of this incident, Larry Brown, Don Walsh, and Art Heyman were “declared ineligible to compete against other Atlantic Coast Conference teams for the remainder of the regular season 1960-61,” were “not to appear in basketball uniforms at games in which they are ineligible to compete [or to] to sit on the players’ benches during such contests.” These penalties did not apply to tournament play, but UNC was already ineligible for such games as they were serving one year probation due to recruiting violations. 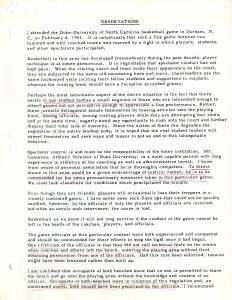 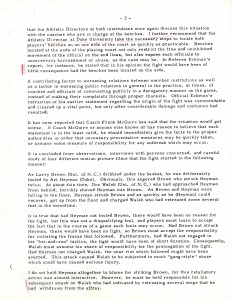 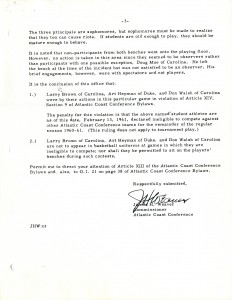 In addition to documenting the storied animosity between UNC and Duke, this incident is noteworthy for including several notable figures. In the years since, Larry Brown has coached 13 college and professional basketball teams and has won both NCAA and NBA championships. Brown was enshrined in the Basketball Hall of Fame in 2002 and is currently the head coach of Southern Methodist University’s men’s basketball team, the Mustangs. The second UNC player suspended due to the fight, Don Walsh, has served as head coach of the Denver Nuggets, general manager and president of basketball operations of the Indiana Pacers, president of basketball operations with the New York Knicks, and is currently a consultant for the Pacers. Heyman went on to be the first overall pick in the 1963 NBA draft and was selected by the New York Knicks.