In his column in The Charlotte Observer issue of Sunday, August 25, 1996, legendary sports columnist Ron Green wrote the following:

RIP.  Forever.  In a hermetically sealed steel container.   Under a heavy layer of concrete.

The fellow who said a tie was like kissing your sister gave far too much credit to a tie.

But before the 1996 season, the tie was alive and well and living on Saturday afternoons throughout college football.

During the “Golden Age” (1946-1949) of UNC football there were two of these tie games, and both made for interesting ink and airtime.  Morton Collection volunteer Jack Hilliard takes a look back at one of those ties . . . sixty-seven years ago this week. 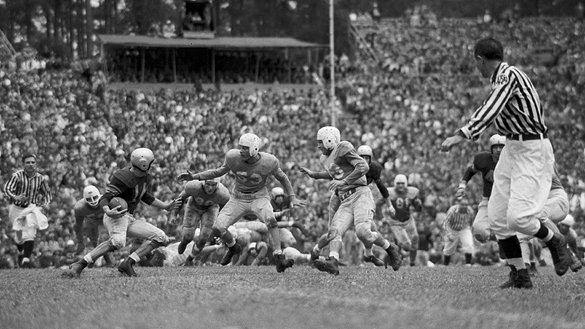 William & Mary running back Tommy Korzowski (#14) encounters UNC defenders Ken Powell (#53, left end) and possibly Bill Maceyko (#43?). In the left background is Carolina right guard Larry Klosterman, (#80). In the far right background is right tackle Ted Hazelwood (#81). The jersey number for player in the left background is only partially visible, but may be #56; if so, that’s right end Mike Rubish.
This is the only negative (cropped for this blog post by the editor) identified by Morton from the 1948 William & Mary versus UNC football game. Another negative from that game was scene made on the sideline, but previously misidentified in published in books as being taken during the 1949 Sugar Bowl. To learn more about that discovery, click on the link in the story below.

Three days after Harry Truman defeated Thomas Dewey for the presidency of the United States, The College of William and Mary’s 1947 Southern Conference champion football team rolled into Chapel Hill on Friday, November 5, 1948 as a twenty-point underdog.  They weren’t given much of a chance against the undefeated, nationally third-ranked Tar Heels.  Carolina was riding atop a thirteen-game winning streak, a winning streak that had started ironically against William & Mary on October 18, 1947—the only ’47 loss for W&M.  Despite a defensive front line that averaged 211 pounds per man compared to Carolina’s 205,  I think it’s safe to say that most of the 43,000 Tar Heel fans that jammed into Kenan Stadium on that rainy, gray, windswept Saturday afternoon thought this would be win number 14; the William & Mary team, however, had a different idea. 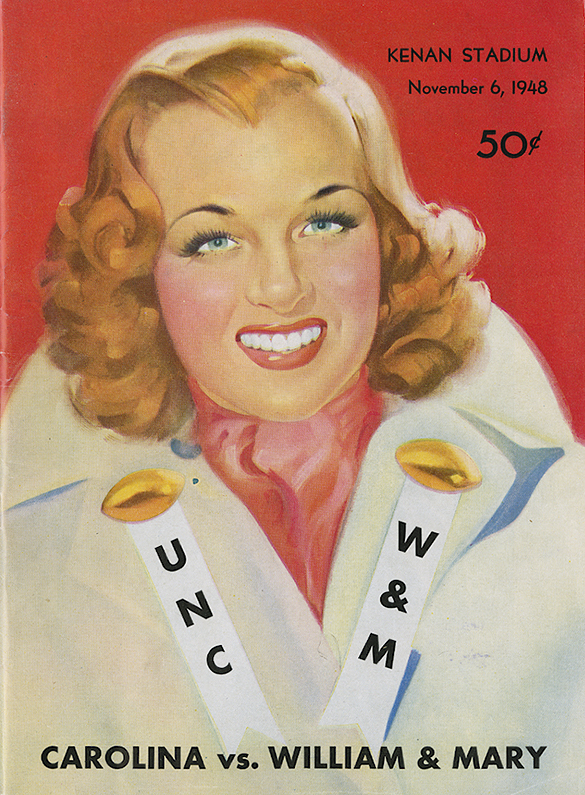 Game day program from the 6 November 1948 football game between William & Mary and UNC played at Kenan Stadium in Chapel Hill. Pictured on the cover is singer Jo Stafford. The “On the Cover” caption on page 3 says, “Jo’s hobby is folk songs and she has set up a $250 award for the student who submits the best collection of them to her.” When Hugh Morton was a UNC student, he photographed Stafford along with Tommy Dorsey and the “Pied Pipers” performing during the 1941 “May Frolics” dance at the Tin Can. Also in that photograph is Chuck Lowry, Frank Sinatra, and Buddy Rich. (See http://dc.lib.unc.edu/cdm/ref/collection/morton_highlights/id/740.)

Before the opening kickoff, Carolina head cheerleader Norman Sper reminded one and all:

There was booing at Tennessee last week, and we hope that all of you will refrain from such unsportsmanlike conduct.

Sper was referring to a controversial play during Carolina’s 14 to 7 win in Knoxville on October 30th.  Shortly before the end of the second quarter, Tennessee’s Hal Littleford returned a Charlie Justice punt 90 yards for a score, but the play was called back.  Referee Walter Hoffman detected clipping when Chaddie Baker tried to block Hosea Rodgers.  It seemed like all 50,000 fans were upset with the call—so much so that Knoxville Police Chief Joe Kimscy ordered special protection for the game officials when a small crowd surged out of the stands and onto the field.  An action photograph from the Knoxville News–Sentinel clearly showed the infraction.  UNC’s “Alumni Review” titled the picture “The Tennessee Clipper.”)

After a scoreless first quarter, William & Mary recovered a fumble on the Carolina 27 yard line about half way through the second quarter.  Two line plays netted six yards; then on third down, left halfback Tommy Korczowski threw a looping lob-pass into the end zone for co-captain Lou Hoitsma who seemed to be covered by Tar Heels Bill Flamisch and Bill Maceyko.  All three went up for the ball, but Hoitsma made a circus catch. The Indians—W&M’s nickname in 1949, but known today as The Tribe—led 7-0 at the half.

UNC’s special halftime guests were nine outstanding high school bands from across the state. The bands performed several maneuvers including an outline of the state and invited the crowd to join in singing “The Old North State.”

Late in the third quarter, Hosea Rodgers finally scored for the Heels on a one yard run to culminate a 15-play, 76-yard-drive. For the remainder of the third quarter and through the fourth, UNC’s Charlie Justice and W&M’s Jack Cloud tried all the tricks in the book, but defense was the name of the game on this day. Hugh Morton’s photograph of the Carolina bench near the end of the game tells the story with long faces and looks of concern. Then, with time running out and Carolina with the ball at its own 21, Billy Hayes went back to pass.  He spotted Max Cooke at the 28 and let it fly, but William & Mary’s Joe Mark cut in front of Cooke and made the interception. When Hayes finally got Mark on the ground, the ball was at the Carolina 8 . . . just as the gun sounded to end the game. William & Mary’s Jack Cloud immediately ran up to referee Mr. Dandelake pleading for a time out. But, as UNC center the late Joe Neikirk, who was standing beside the referee, liked to tell the story, Dandelake said, “Son, the d— game is over.” Neikirk added “the tie wrecked our season.”

Both head coaches weighed in following the game. W&M coach R. N. (Rube) McCray said, “We were definitely not playing for a tie.  We were out to win.”  UNC Head Coach Carl Snavely added,” We were lucky to come out with a tie.”

So, how did William & Mary hold the number three team in the country to a 7-7 tie?  They got only one first down and that was on a penalty, while the Tar Heels got 17.  They completed only 2 passes for a total of 22 yards; Carolina completed 7 for 83 yards.  They gained only 19 yards on the ground, the Heels got 184. Along the way, Carolina lost 3 fumbles and had 4 passes intercepted.  And W&M held UNC’s great All-America Charlie Justice scoreless for the first time during Carolina’s 13-game win streak.  For the answer, the headline in UNC’s The Alumni Review says it all:

When the Associated Press football rankings came out on November 8th, Carolina had dropped four places to number 7 and as a number three going into the William & Mary game, they had received 36 first place votes.  Following the game they got only 7.

It’s rare when one considers a tie game to be a great game, but when you check the 1949 William & Mary yearbook, Colonial Echo, you find that the editors considered the tie with Carolina to be the “highlight of the year,” and their 21-yard touchdown pass as the “greatest play of the season.” Authors Wilford Kale, Bob Moskowitz, and Charles M. Holloway, in their 1997 book, Goal to Goal: 100 Seasons of Football at William and Mary, agreed with the yearbook assessment. The yearbook editors additionally pointed out that some newspaper writers even took the W&M touchdown play a step further calling it “the play of the year in the Southern Conference.”

There are two Kenan Stadium records from this game that still stand over half-way through the 2015 season—both achieved by William & Mary’s punter Buddy Lex.  On this day he punted a total of 15 times for a total 645 yards.

It was a classic game, one fit to be tied.

And as for that other “Golden Era” tie mentioned in the opening: it came on September 28, 1946, a 14 to 14 tie with another team from the state of Virginia, VPI (It’s Virginia Tech today).

Epilogue:  Another Tie of Distinction

In January, 1997, I received a letter from Hugh Morton after I sent him a videotape I had made about the ‘47 Sugar Bowl 50th reunion.  Here’s what he said:

“I’ve always considered myself the most loyal Charles Justice fan still around, but I’m having doubts about that. I think maybe you are, or possibly we are tied for that.”