In January 8, 1925, David Scott Poole from Hoke County introduced a resolution in the North Carolina State Legislature stating: “That it is the sense of the General Assembly of North Carolina  that it is injurious to the welfare of … Continue reading → 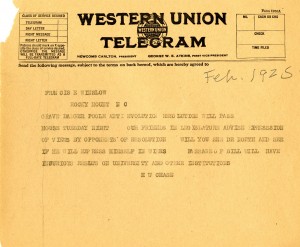 Telegram from President Chase asking for help to defeat the Poole Bill (from the University of North Carolina Papers, #40005, University Archives)

“That it is the sense of the General Assembly of North Carolina  that it is injurious to the welfare of the people of the State of North Carolina for any official or teacher in the State, paid wholly or in part by taxation, to teach or permit to be taught as a fact either Darwinism or any other evolutionary hypothesis that links men in blood relationship with any lower form of life.”

This resolution was the culmination of at least five years of increasing debate over the teaching and learning of evolution in public schools. In 1920, the President of Wake Forest University, William L. Poteat, accepted the teaching of evolution as part of Wake Forest’s biology curriculum. At the same time, President Henry W. Chase and Dr. Howard Odum at the University of North Carolina at Chapel Hill sought to increase the scope of the academic research done at the school. Social Forces, a journal founded by Odum in 1922, published several articles on the issue of religion and academic freedom. The John Calvin McNair Lecture Series, which was founded in 1906 and focused on the relationship of science and theology, also hosted talks on this topic in the years leading up to the resolution.

For the university community, and President Chase in particular, the issue of teaching evolution was not one of religion but freedom of speech and the freedom to teach the “scientific truth”. President Chase vigorously defended the fact that the University of North Carolina was not trying to suppress religion in its schools. Instead, religious activities and studies were actively encouraged and supported by the university. What President Chase objected to was the interference of political agendas in teaching.

“The state of North Carolina has shown that it believes in the free thought and discussion necessary to secure the advancement of the knowledge in the world. I have simply tried to point out that such freedom does not produce an atmosphere of indifference to religion, that, as the unrestricted right to seek for truth, it is the vital and essential thing to which a University must be dedicated. Scientific truth has never, in the long run, done the slightest harm to religious faith, but has on the contrary widened and deepened that faith.” 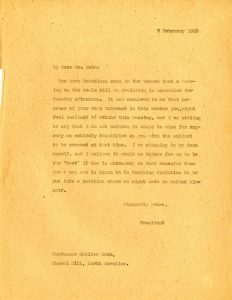 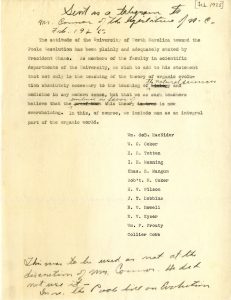 President Chase and his allies helped to defeat the resolution in committee. It also failed when brought to the full General Assembly for a vote.

For more on the anti-evolution debate see: “The Evolution Controversy in North Carolina in the 1920s”, an online exhibit provided by UNC Libraries.