The Records of the Office of the President of the UNC System under Frank Porter Graham (1932-1949) include several folders labeled “Race and Ethnic Relations: Negroes.” These folders include clippings and correspondence providing a first-hand look at the actions of the university … Continue reading →

The Records of the Office of the President of the UNC System under Frank Porter Graham (1932-1949) include several folders labeled “Race and Ethnic Relations: Negroes.” These folders include clippings and correspondence providing a first-hand look at the actions of the university as it battled accusations of racism and fought to prevent African Americans from enrolling at UNC. Most of these folders have been digitized and are fully accessible through the online finding aid.

Included in the folder from 1939 is a remarkable series of letters between Pauli Murray and Frank Porter Graham. Murray, who was the descendant of both slaves and slaveowners, had grown up in Durham and was part of a family with deep ties to North Carolina. In 1938, she had recently graduated from Hunter College in New York and applied to enroll in the graduate school at UNC. Her application was ultimately rejected (UNC would not admit its first African American student until 1950), but her attempts drew national attention and brought a direct response from UNC system president Frank Porter Graham. 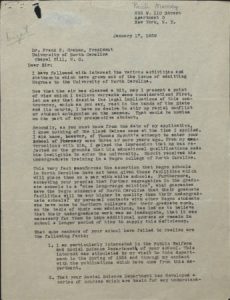 In Murray’s first letter, dated January 17, 1939 [page 1 | 2 | 3 | 4 ], she challenges the idea that she can obtain a “separate but equal” graduate education at one of the state’s historically black colleges. She writes that it is the excellent reputation of UNC, particularly the department of social science and faculty members Howard Odum and Guy Benton Johnson, that inspired her application. Murray’s letter is marked by her optimism. She argues that any hesitation among the students about admitting African Americans should be answered by “frank, open discussion” and a “give-and-take process where prejudices are openly aired and accounted for, where correct interpretations are made and where enlightenment is gained in an atmosphere of mutual co-operation and respect.”

Graham does not reply until February 3 [page 1 | 2 ], saying that all of his time has been taken up with lobbying the state legislature to avoid serious cuts to the UNC budget. In his response, Graham goes over the reasons for the university’s rejection of Murray’s application, noting the “provision in the Constitution of North Carolina requiring the separation of the races in public education.” He also warns Murray against forcing a “popular referendum on the race issue,” saying that the results would “cause a throwback to a darker time.” He advocates gradual progress, starting with improving conditions for the historically black colleges.

Graham closes with a surprisingly honest description of the challenges he faces, which reads like a weary acknowledgement of his inability to help: “As you may know, I am under very bitter attack in some parts of North Carolina and the lower south for what little I have tried to do in behalf of the Negro people, organized and unorganized workers and other underprivileged groups. I realize I am also under attack because I understand the limitations under which we must work in order to make the next possible advance.”

Murray responded quickly, in a short but powerful letter on February 6. She says simply that “the Constitution of North Carolina is inconsistent with the Constitution of the United States and should be changed to meet the ideals set forth by the first citizens of our country.”

She then explains that she can not and will not wait for gradual progress, using language that could serve as a rallying cry to the generations of activists who followed her: “We of the younger generation cannot compromise with our ideals of human equality. We have seen the consequences of such compromises in the bloody pages of human history, and we must hold fast, using all of our passion and our reason.”

The full story of Murray’s attempts to enroll at UNC is told in Chapter 11 of her autobiography, Song in a Weary Throat: An American Pilgrimage  and in the article “Admitting Pauli Murray” by Glenda Gilmore (Journal of Women’s History 14.2, 2002, pp. 62-67). Murray discussed her struggle with UNC in an interview she did with the Southern Oral History Program in 1976.