On April 24, 1988—twenty-eight years ago this week, Hall of Fame newsman and broadcaster David Brinkley (July 10, 1920 – June 11, 2003) delivered the Reed Sarratt Distinguished Lecture in Hill Hall on the University of North Carolina campus in … Continue reading → 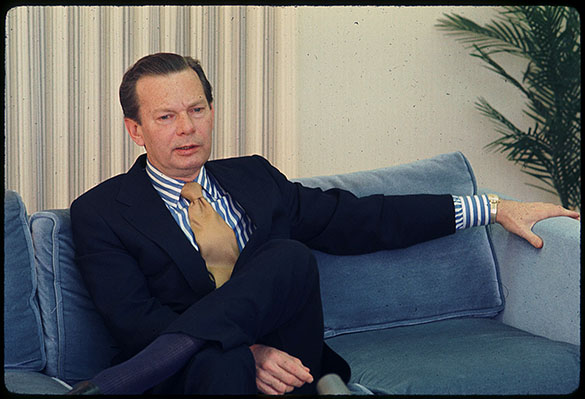 On April 24, 1988—twenty-eight years ago this week, Hall of Fame newsman and broadcaster David Brinkley (July 10, 1920 – June 11, 2003) delivered the Reed Sarratt Distinguished Lecture in Hill Hall on the University of North Carolina campus in Chapel Hill.  Brinkley, a native of Wilmington, briefly attended UNC before joining the United States Army in 1940.  In 1988 Brinkley was a commentator for ABC World News Tonight, but many in attendance that evening remembered him from his NBC News days as the “other half of the hyphen” on the Huntley–Brinkley Report from 1956 to 1970.  Morton collection volunteer Jack Hilliard takes a look at the life and times of David Brinkley.

One of my earliest TV memories is watching the evening news on CBS with my family in Asheboro, N. C.  In the years 1951 and ’52 we had a 14-inch black-and-white General Electric model TV set.  The news anchor was Douglas Edwards, but we didn’t know him as an anchor in those days.  He was just the face on the screen.  My dad often said he wished we could get the news on NBC because he had grown up with news on the radio with names like H. V. Kaltenborn, Ben Grauer, Morgan Beatty, and Bill Henry. But there wasn’t an NBC affiliated station in the Triad in those days.  WFMY-TV in Greensboro was the only television station in the Greensboro–High Point–Winston-Salem market.  So CBS was our only choice.

In the summer of 1952 we were able to see the Democratic and Republican parties’ national political conventions from Chicago, and the new face on CBS was a man with a funny last name: Walter Cronkite. Television had been at the 1948 conventions with a limited number of stations, but there weren’t many sets in use back then so that TV presence is nothing more than a historical footnote today.  In ’52 things were different.  Most everyone with a TV set watched the conventions, and the day-to-day happenings in Chicago became water-cooler conversations across the nation.

Then, on September 30, 1953, my dad got his wish—television station WSJS-TV in Winston-Salem, an NBC affiliate, signed on the air.  (The station today is WXII-TV).  Most of my dad’s NBC News favorites were there on The Camel News Caravan with John Cameron Swayze.  In addition, there was also a reporter named David Brinkley.

Brinkley began his television career at NBC in 1951, having worked for United Press starting in 1943 following his military service in the army.  One of Brinkley’s early NBC assignments was to cover President Harry Truman’s trip to Winston-Salem for the groundbreaking ceremony for Wake Forest College. (Hugh Morton attended that ceremony as well and we hope to write a post about the ceremony later this year in October.)

When it came time for the 1956 political conventions, NBC faced a major challenge. Walter Cronkite had set a high mark in ’52, so executives at NBC News looked for a way to compete with Cronkite. Their plan was to put in place two anchors for the broadcast. Originally they considered teaming Bill Henry with Ray Scherer, but the NBC brass ultimately decided on Chet Huntley and David Brinkley. 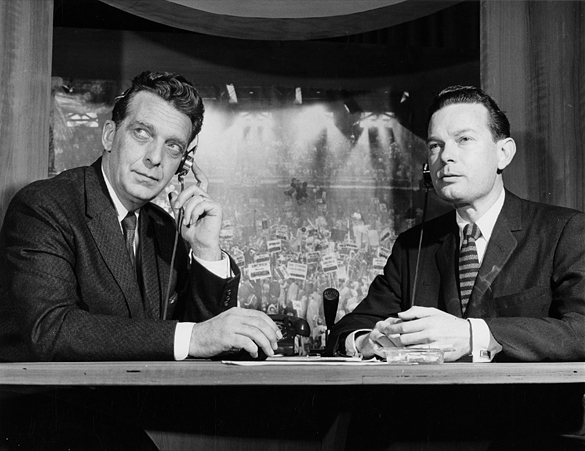 Chet Huntley and David Brinkley. This unattributed photographic print in the Hugh Morton collection is likely a publicity photograph distributed by NBC. A similar photograph on the NBCUniversal website (submitted by Anonymous) dates the photograph as 1956. See http://www.nbcuniversal.com/content/chet-huntley-and-david-brinkley-gain-national-acclaim-their-election-coverage-and-their.

The double-team worked.  It worked so well, in fact, that on October 29, 1956, the two-man-team took over the NBC evening newscast; thus was born the Huntley-Brinkley Report, with Chet Huntley in New York and David Brinkley in Washington.  Brinkley’s dry wit and Huntley’s serious tone became the newscast to watch. Their catchphrase ending to each night’s broadcast was  “Good night, Chet. Good night David. And Good Night for NBC News”—followed by the second movement of Beethoven’s Ninth Symphony as credits rolled.

The tandem proved to be a ratings’ winner.  It was not until the late 1960s that CBS Evening News with Walter Cronkite finally caught up in the ratings’ race.  From 1961 until 1963, David Brinkley added a magazine show to his resume called David Brinkley’s Journal.  I remember how frustrated I was as a UNC student in 1961 when the local NBC station in the Triangle chose not to carry the program.  The final Huntley–Brinkley Report aired on July 31, 1970 when Chet Huntley retired from NBC News. 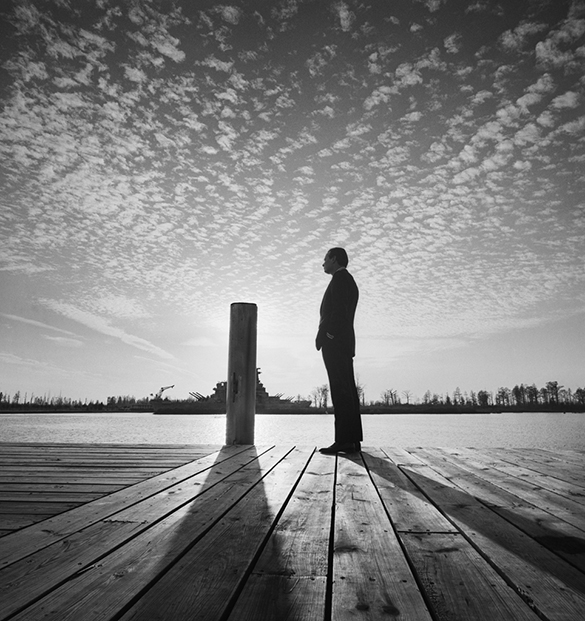 Profile shot of newsman David Brinkley standing in silhouette on the Hilton Hotel Pier on the Cape Fear Waterfront in Wilmington, North Carolina, with the USS North Carolina in background. Morton was instrumental in bringing the mothballed battleship to Wilmington in 1961; Brinkley, a Wilmington native, appeared in public service television spots for fundraising. Morton made this portrait during Wilmington’s “David Brinkley Day” on 7 January 1971.

On January 7, 1971, the city of Wilmington staged a special celebration for its native son, declaring the day “David Brinkley Day.” A Chamber of Commerce committee that included Hugh Morton, Wayne Jackson from WECT-TV, and Allen Jones from WGNI Radio, planned the event. Morton’s job was to prepare a “This is Your Life, David Brinkley” slide show. With help from Al Dickson the executive editor of the Wilmington Star-News, Morton was able to get pictures from Brinkley’s early days in Wilmington when as a high school student he had worked for the paper. Jackson was able to get Chet Huntley to narrate the slide show, which was the hit of the banquet that evening.  Following the slide show, Morton said, “We are pretty certain we saw tears on the cheeks of the usually unemotional David Brinkley, once the light came back on.”

Brinkley continued at NBC News doing anchor work and commentary until 1981 when he left for ABC News.  There Brinkley did commentary for the evening news and added This Week with David Brinkley, a Sunday morning interview program with news analysis. The award-winning Sunday morning program continued until November 10, 1996.

Brinkley wrote three books, including the critically acclaimed 1988 bestseller Washington Goes to War about how World War II transformed the nation’s capital.  The title of his 1995 memoir sums up his career in broadcasting: David Brinkley: 11 Presidents, 4 Wars, 22 Political Conventions, 1 Moon Landing, 3 Assassinations, 2000 Weeks of News and Other Stuff on Television and 18 Years of Growing Up in North Carolina.”

During his career Brinkley won ten Emmy Awards, three George Foster Peabody Awards, and, in 1958, the Alfred I. DuPont Award.  In 1982 he received the Paul White Award for lifetime achievement from the Radio Television Digital News Association. He was inducted into the Television Hall of Fame in 1988 and the North Carolina Journalism Hall of Fame in 1989.  In 1992 President George H.W. Bush awarded Brinkley the Presidential Medal of Freedom.

On Wednesday, June 11, 2003, David Brinkley died at his home in Houston, Texas from complications after a fall.  He was 82.  Richard Severo, writing in the June 12, 2003 edition of The New York Times began his Brinkley obituary with these words:

David Brinkley, whose pungent news commentaries, delivered with a mixture of wry skepticism and succinct candor, set the standard for network television for generations . . .

Brinkley is buried in the beautiful Oakdale Cemetery in Wilmington, North Carolina. 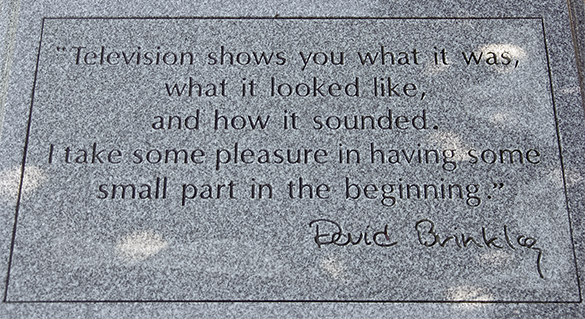 An Epilog
The Reed Sarratt Distinguished Lecture Series brings some of the best and brightest minds in the field of journalism and mass communications to the UNC campus each spring semester to discuss matters of importance and concern. The series was started with two events in 1987 and for its third event, the speaker was David Brinkley.

In addition to his discussion of journalism philosophy and principle, Brinkley shared a humorous story from a time when he was an anchor with NBC News:

Many years ago, when I was doing the Huntley-Brinkley Report, I was in an airport somewhere, and I was approached by a gray-haired lady.  She said, “Are you Chet Huntley?”  I said, “Yes, I am.”  If I had walked up to Abbott and Costello, I’m not sure I would have known which one was which.  The woman in the lobby, still thinking she was addressing Huntley, told me she liked me just fine.  Then she said but I don’t know how you can stand that idiot Brinkley.

Brinkley was a hit that day at his alma mater, and four years later returned to deliver the commencement address on May 10, 1992.