During the month of May, UNC’s General Alumni Association (GAA) celebrates three very important anniversaries: it’s 173rd birthday on May 31st, and the groundbreaking for and the dedication of the George Watts Hill Alumni Center.  Morton collection volunteer Jack Hilliard shares some … Continue reading →

During the month of May, UNC’s General Alumni Association (GAA) celebrates three very important anniversaries: it’s 173rd birthday on May 31st, and the groundbreaking for and the dedication of the George Watts Hill Alumni Center.  Morton collection volunteer Jack Hilliard shares some the history behind these events. 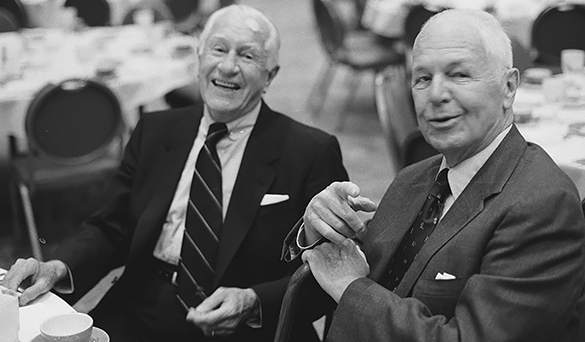 A Prolog
The General Alumni Association at the University of North Carolina (GAA) was born on May 31, 1843 when thirty-one graduates ranging from the classes of 1801 to 1842 gathered in Garrard Hall with Governor John Motley Morehead as chairman and director.  Three decades would pass, however, before alumni as a collective body would take an active role in the well–being of the university.  According to Kenneth Joel Zogry in his 1999 book, The University’s Living Room: A History of the Carolina Inn, “there was little interest or activity before the Civil War.  But alumni involvement was critical to the reopening of the University in 1875.”

Following the university’s reopening, alumni activities took place in various campus locations—first in the Alumni Building on McCorkle Place, then on the second and third floors of South Building—but there never seemed to be enough room.  Plans drawn for The Carolina Inn in 1922 had the GAA moving its offices into the building, fulfilling the original concept for the inn.  When the inn opened in December 1924, however, there was no space included for the Alumni Association offices, and the “traveling” GAA continued its journey from the third floor of South Building.

In a letter dated June 4, 1935 John Sprunt Hill, who had built the Carolina Inn, turned the facility over to the university.  Soon thereafter, on February 13, 1936, the university made makeshift quarters for the GAA by modifying the inn’s eastern porch that ran behind the the main ballroom. The enclosed porch, along with space in the basement and lobby, became GAA’s home, lasting until 1940 when it moved into a small suite of offices next to the inn’s Faculty Club Room.  Also opening in 1940 was a three-story building consisting of twelve apartments, built next to the original Carolina Inn building. That new structure faced South Columbia Street and was named the Bryan Apartment Building honoring Joseph Hunter Bryan, a University trustee from 1809 until 1817.

In October of 1969, the GAA moved into the Bryan Apartment Building (often called the Carolina Apartments) and the facility then became known as Alumni House.  The GAA remained there for twenty-four years until the George Watts Hill Alumni Center opened in March of 1993.

We are funding more than a building, more than a Chapel Hill home for our loyal and dedicated alumni.  We are cementing the bond between Carolina’s sons and daughters and alma mater.  We are expanding alumni involvement and assuring that alumni—the only permanent constituency of the University—will forever have a seat at the table in the important work of our University.

As UNC’s General Alumni Association approached its 142nd birthday in mid-May of 1985, it was still in search of a permanent, free-standing center to call home.  During the ‘85 graduation and reunion weekend things were about to change.

Alumni Association President Ralph Strayhorn, during the annual alumni luncheon on May 11th, announced to the gathering of 450 people that the GAA had received the necessary approvals for a new alumni center to be located on South Campus next to the Kenan Center, which was still under construction, and overlooking the still unfinished Student Activity Center.  At last, a three-story 63,000 square foot building could be called home.

One of those necessary approvals was permission to raise the needed $8.5 million to build the center.  That campaign got underway quickly, and in May 1986 the GAA reported that they had received a $3.5 million anonymous challenge-gift, along with a $500,000 donation from the James M. Johnson Trust.  They also announced that Ralph Strayhorn would be heading up the fund raising campaign.

Ralph N. Strayhorn, UNC Class of 1947, was a past chairman of the UNC Board of Trustees, and a past president of The Educational Foundation, Inc.  He was a former president of the North Carolina Bar Association and chief corporate counsel of Wachovia Corporation in Winston-Salem.  Many old-time Tar Heels will remember him as co-captain of the 1946 Carolina Tar Heel football team that played in the 1947 Sugar Bowl, and along with his friend Charlie Justice was honored in a pregame ceremony during the 1997 Sugar Bowl—50 years after that ’47 game. Strayhorn also spoke at the dedication of the Charlie Justice statue in November of 2004. 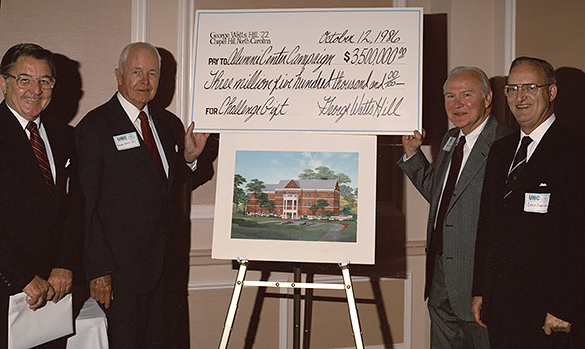 In July of 1987, Strayhorn announced that fund raising had reached $5.5 million and it was also revealed that the anonymous donor was George Watts Hill, Sr., for whom the building would be named.  On Hill’s urging and with the GAA’s blessing, the site for the new alumni center was moved to Stadium Drive next-door to Kenan Memorial Stadium. Since the new site provided very little parking and was one of the last wooded areas on South Campus, there was some opposition, but the new site was approved.

As contributions rolled in and time went by, the costs for the building increased. By the time the November, 1988 issue of The Alumni Report newspaper came out, the total costs for the facility had risen to $12 million and a Kenan family gift of $250,000 had brought the total monies raised to $10 million.  Two months later, when the January, 1989, issue of the paper hit the streets, the total donations had reached the $11 million mark. 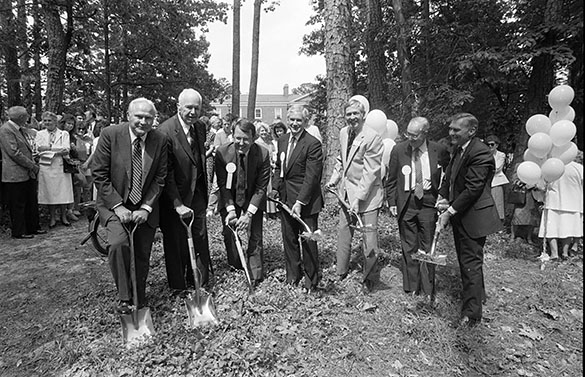 Soon construction got underway, and the fund raising campaign reached its goal: $12.5 million raised with 14,500 alumni and friends contributing.  In the words of campaign committee chairman Strayhorn, “Once we got Mr. Hill’s lead gift for the center, the raising of the money was very—I won’t say easy, but came in very nicely.  Of course, that doesn’t mean we didn’t work very hard for it.”

I will never stop doing all I can for Carolina. —George Watts Hill, Sr., UNC Class of 1922

As the construction work continued, the end was in sight.  Moving-in day looked to be in early 1993 with a graduation/reunion weekend date of May 14th for the dedication ceremony.  Then, in the early morning hours of January 20, 1993, the Tar Heel Nation lost a loving friend and faithful supporter.  George Watts Hill, Sr., UNC Class of 1922, died peacefully in his sleep. He was 91 years old.

“Watts Hill symbolized in his life what the word grace means. And his decency and good will taught us so much we will long remember,” said Dr. William Friday.  UNC Chancellor Paul Hardin added, “We have lost indeed one of the most majestic leaders in the 20th century.”  And GAA Executive Director Douglas Dibbert said, “It was my personal joy to work with him these past several years as together, with the support of many others, we moved the long cherished dream to reality with the construction of the George Watts Hill Alumni Center . . .”  A moment of silence in his honor was observed in the Smith Center before the start of the Carolina–Virginia basketball game on January 20. 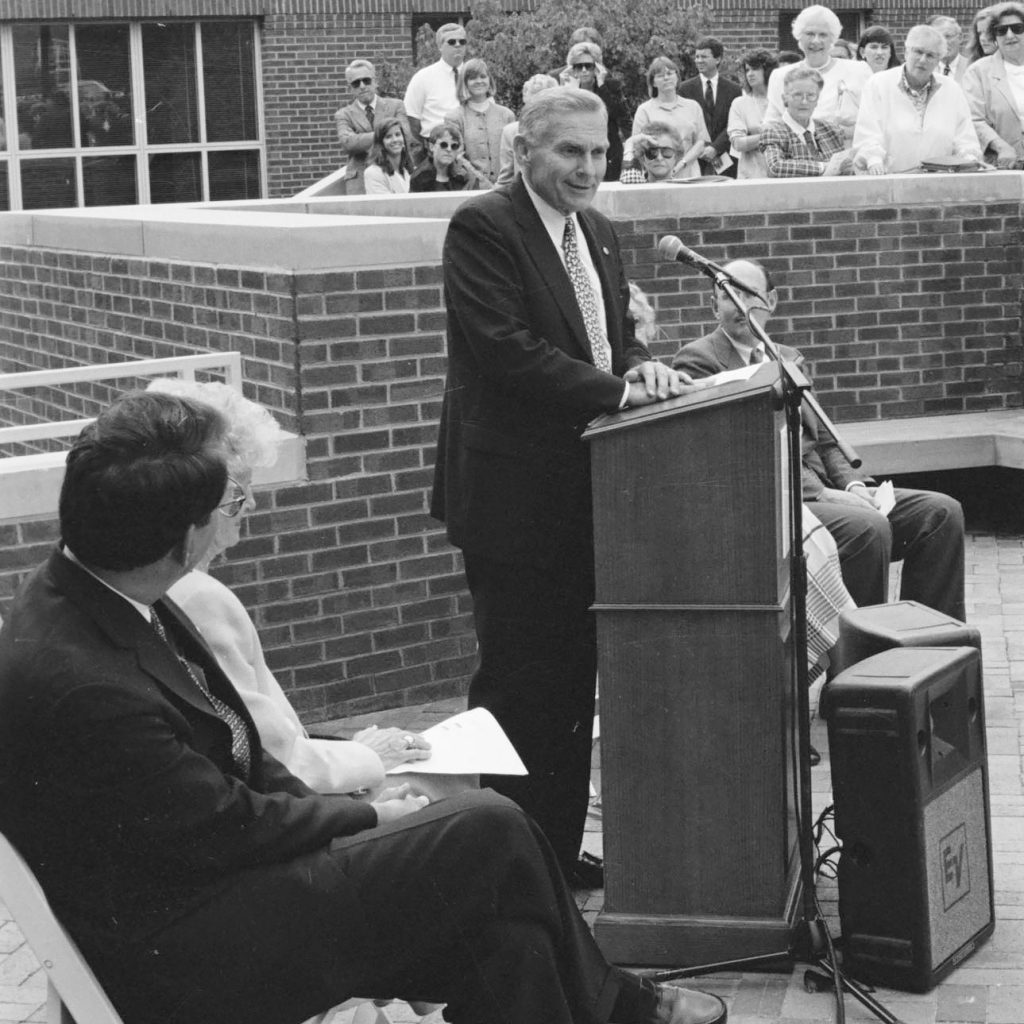 The next time you visit the UNC campus and you find yourself near Carolina’s geographical center on that path between north and south campus, stop for a few seconds and check out the building at 106 Stadium Drive, the one with the entrance tower which bears the carved stone nameplate “George Watts Hill Alumni Center.”  If your schedule permits, go inside . . . you’ll be impressed.  For more history and a description of the building, the GAA website has republished a 1997 article by — Carolyn Edy ’97 (MA) updated in 2003 titled “Welcome to the George Watts Hill Alumni Center.”

An Epilog
On August 30, 1994, a group of about seventy-five GAA employees, friends, and former residents of the Bryan Apartment Building gathered for a good-bye ceremony. The building had served the University for fifty-four years and the GAA for twenty-four. Following a few speeches of remembrance, a giant wrecking ball swung into action and a few days later, the old building was but a memory.  To keep that memory alive, the Public Works Administration plaque from the 1939-1940 additions to the Carolina Inn, which had included the Bryan Apartments, was retrieved, mounted, and given a special place in the new George Watts Hill Alumni Center.