The summer hiatus here at A View to Hugh is winding down as students begin appearing on campus this weekend.  Hot August days have returned to Chapel Hill and football practice is underway for the 2016 season.  Expectations are high … Continue reading →

The summer hiatus here at A View to Hugh is winding down as students begin appearing on campus this weekend.  Hot August days have returned to Chapel Hill and football practice is underway for the 2016 season.  Expectations are high for the Tar Heels just as it was seventy seasons ago.  Today, on this anniversary of the birth of a very special friendship, Hugh Morton collection volunteer Jack Hilliard looks back to August 17, 1946. 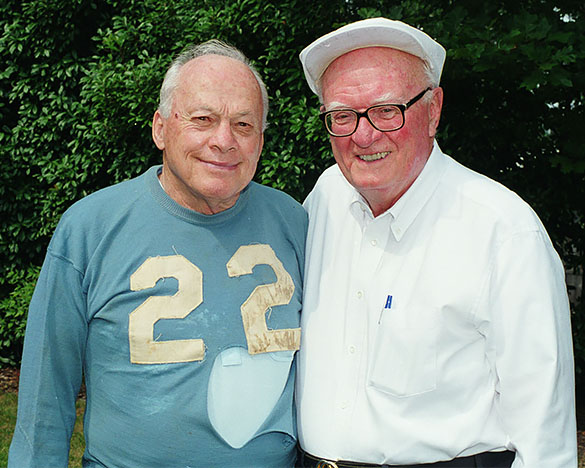 Charlie Justice standing with Hugh Morton. Justice is wearing the #22 jersey recovered in November 1948 by UNC President C. D. Spangler during a UNC-Virginia football game. This photograph dates from the late 1990s to early 2000s.

It was early August, 1946, and it was hot. The annual preseason football magazines had just hit the stands and judging from those traditional predictors, Carolina was going to be something special. Sportswriter Jack Troy wrote in the 1946 issue of Street & Smith Football Pictorial Yearbook:

. . . the Tar Heels are about ready to step back into the picture as a national football power.  During the winter the Tar Heels snatched Charlie Justice from under the noses of South Carolina coaches, and Justice is supposed to be one of the best ball carriers in the business.

One of the most welcomed lettermen returning was Hosea Rodgers, a 200-pound fullback who led Carolina to a 9 to 6 victory over Pennsylvania back in 1943. Many of the freshmen were returning World War II veterans in their 20s—like freshman Charlie Justice, sometimes called the “Bainbridge Flash.” Justice was the one player who was going to make a good Carolina team great.

With the stage set, practice got underway.  Although classes had not officially begun, there were many students already on campus.  It wasn’t unusual for two or three hundred students to show up for Carolina’s practices.  One of the early official team functions was called picture day, when the players dress out in their game day uniforms and talk with the media and pose for photographs. Of course one of those photographers present was Hugh Morton.  Here’s how Justice described the scene that day for biographer Bob Terrell in a 1995 interview:

The first time I saw Hugh Morton was in August of 1946. The weather was hot and we were practicing twice a day. Sunday was an off day and Snavely and his staff decided that was the day they’d have the press come in and take pictures, get interviews, and so forth. . . We started at two o’clock, and it seemed that everybody in the country was there to shoot pictures. I noticed Hugh Morton on the sidelines, paying no attention to me at all, taking pictures of everybody else.

After about two and a half hours, Snavely said “that’s it guys,” and told the players they could go inside out of the heat.  As the Tar Heels were leaving the field, UNC Publicity Director Robert Madry’s Assistant Jake Wade came over to Justice and said: “Charlie, I’d like for you to meet Hugh Morton. He’s a great friend of the University. He’d like to take a few more shots.”  According to Justice, “We stayed there another two hours, hot as it was, and everything had to be just perfect.”

Finally Morton finished up and as the August sun was setting behind the west end zone, Charlie began the long walk to the Kenan Field House dressing room at the other end of Kenan Stadium. “I didn’t say anything at the time,” Justice said, ”but when I got in the dressing room, everybody had already left. I said, ‘I hope I never see him again.’” 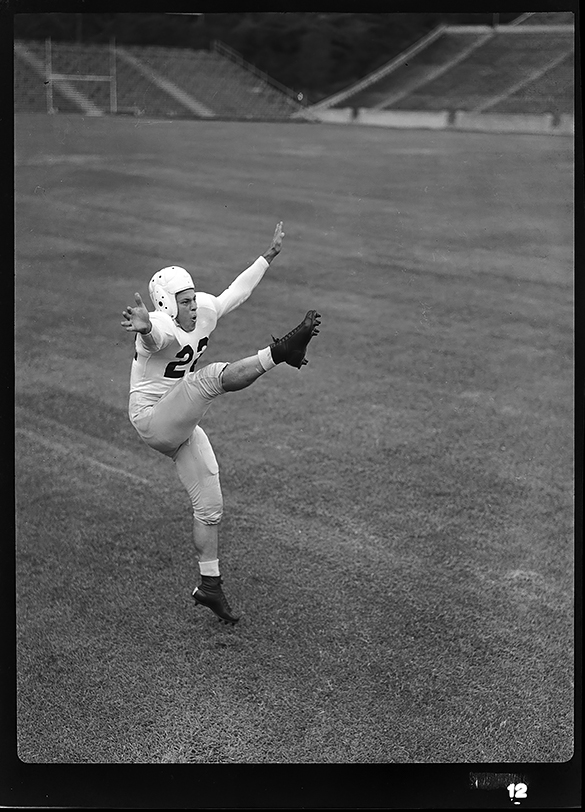 But Charlie did see Hugh again . . . often . . . at practice and on the Kenan sideline almost every Saturday afternoon. They would often carry on extended conversations, and in the end they became friends, a friendship that lasted 57 years. Justice often participated with Hugh at the Azalea Festival in Wilmington and at the Highland Games and other events at Grandfather Mountain. When Hugh Morton announced his candidacy for governor on December 1, 1971 Charlie Justice was with him in front of the Capitol in Raleigh.

“He supported me wholeheartedly,” said Justice, “not just at Carolina, either. When I got to the Redskins, I turned around on the field and there was Hugh shooting pictures. Because of him, I suppose my football career was preserved on film as well as anybody’s ever was. . . . When I went into the [College Football] Hall of Fame, he got Governor Luther Hodges’s plane and flew Sarah, me, and his wife Julia to New York—when we got there we discovered that the girls couldn’t got to the banquet. So Sarah and Julia went over to Broadway and saw My Fair Lady that night. Then we flew back to Raleigh.”

Justice treasured men like Hugh Morton as his friends, and the honor was returned. “We didn’t have ESPN or the Internet back then,” Justice said. “But we didn’t need ’em. We had Hugh Morton. What a great friend he was to our team and to Carolina.” 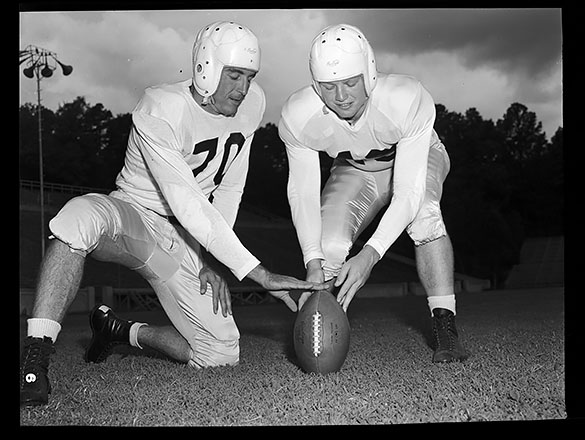 “I can close my eyes and still see him with that camera around his neck,” said Bob Cox, an end and place-kicker from the 1946 Tar Heels, “Hugh was always around the team, around the program. He gave meaning to what we were doing. If anyone ever stood for the Carolina tradition, it was Hugh Morton. He helped build the pride and spirit and love for Carolina as much as anyone on the team.”

On a day in late May of 2001, Hugh Morton, along with several Tar Heel friends visited Charlie and Sarah Justice at their home in Cherryville. Of course Hugh was taking pictures, but at one point he stopped and said, “Charlie Justice inspired more loyalty at a key time following the war that was reflected in a huge amount of support for every facet of the University, not just athletics. It would be impossible to put a value on his contributions to the University—it would be in the real big millions.”

On Monday, October 20, 2003, my wife Marla and I, along with 200 plus others, attended the memorial service for Charlie Justice at The Cathedral of All Souls in Asheville. We were seated on the right side of the church where we could see many of the special guests from the Tar Heel Nation seated in the center. Among that group was Hugh Morton. He, like all of us, was obviously emotionally shaken. I think it was the first and possibly the only time I ever saw him at a Charlie Justice event without his camera.

1931 The Morehead-Patterson Bell Tower was dedicated and rung for the first time.