From the 1927 “Hacawa,” student yearbook at Lenoir Rhyne College.

Henry Owl, a member of the Eastern band of Cherokee Indians, was the first Native American student to attend UNC.  Owl came to Carolina in the fall of 1928 and graduated the following year with a Master of Arts in History.

Owl was born in 1896 near Rattlesnake Mountain in western North Carolina. He attended the school at the Cherokee reservation, which at the time went only through eighth grade. Owl began his college education at the Hampton Institute, a primarily African American school in Hampton, Virginia. After leaving Hampton, Owl joined the U.S. Army and then taught briefly in Oklahoma. He returned to North Carolina in 1925 to enroll in Lenoir College (now Lenoir-Rhyne University) in Hickory.

At Lenoir, Owl was a member of multiple college clubs and was elected “Most Popular Boy.” He was also a star athlete, playing football and baseball. He was inducted into the Lenoir-Rhyne Sports Hall of Fame in 2012. According to Lenoir-Rhyne, Owl was the first Cherokee to graduate from a North Carolina college. 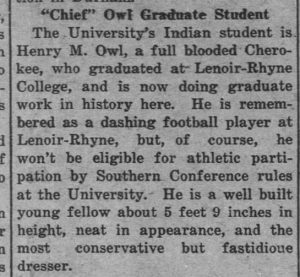 Owl wrote his master’s thesis on the history of the Cherokee Indians in North Carolina. The thesis, The Eastern Band of Cherokee Indians Before and After Renewal, is available in Wilson Library.

In 1930, just a year after graduating from UNC, Owl was prohibited from voting in Swain County. A profile in a the Lenoir-Rhyne alumni magazine described what happened:

[Owl’s daughter, Gladys Cardiff] said her father often discussed this incident. “North Carolina had some issue that they knew the tribe would be voting against,” she said. In those days the state had a literacy test for voters. When Owl tried to register, he was turned away on the grounds that he was illiterate. Owl left the courthouse and returned with a copy of his master’s thesis.

The story of Owl’s struggle to vote eventually reached the U.S. Congress, which passed a law affirming that Cherokees in North Carolina were citizens and had the right to vote.

Owl worked for the Bureau of Indian Affairs as a teacher and principal on reservations in North Carolina, Montana, and South Dakota. He moved with his family to Seattle where he worked as a counselor at the Veteran’s Administration and later as an inspector at Boeing. Wary of the racism that he knew he and his family would encounter on leaving the reservation, Owl began using his wife’s last name, Harris. He died in Seattle in 1980.

In addition to the new Carolina Firsts scholarship named in Owl’s honor, in 2011, the Department of American studies announced an endowed scholarship named The Henry Owl Scholarship Fund for Undergraduate Students.  The scholarship provides need-based assistance to undergraduate majors in the American Studies department, with preference given to those studying American Indian and Indigenous Studies.