UNC Head Football Coach Larry Fedora will be taking his 2016 Tar Heels to the Hyundai Sun Bowl in El Paso, Texas on Friday, December 30, 2016. The game will be featured on CBS at 2:00 p.m.  This will mark … Continue reading → 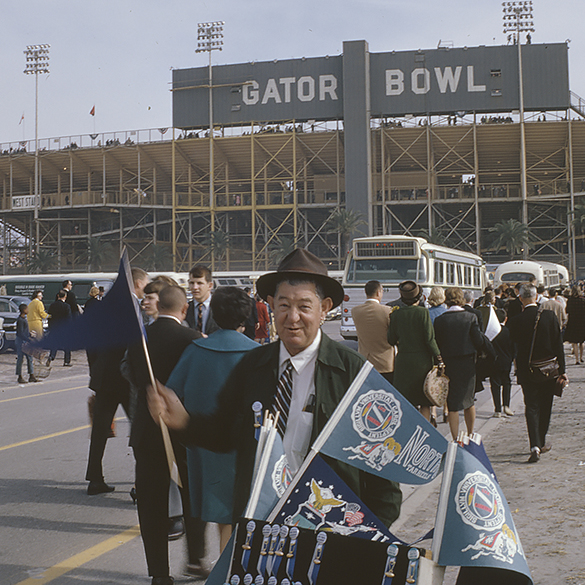 Souvenir seller outside the Gator Bowl in 1963. Photograph by Hugh Morton, cropped from a 35mm color slide by the editor.

UNC Head Football Coach Larry Fedora will be taking his 2016 Tar Heels to the Hyundai Sun Bowl in El Paso, Texas on Friday, December 30, 2016. The game will be featured on CBS at 2:00 p.m.  This will mark Carolina’s thirty-third bowl appearance going back to the 1947 Sugar Bowl. Of the thirty-two previous games, the Tar Heels have won fourteen going back to the 1963 Gator Bowl, a game Tar Heels like to recall.  Morton collection volunteer Jack Hilliard takes a look back at the 1963 season and Carolina’s first bowl win played on this date fifty-three years ago.

We had everything going. What a great feeling to have been struggling since 1949 (sic) and then have this (Gator Bowl) chance. It was just a sweet spot in time.”

In the late summer of 1963 when UNC Head Football Coach Jim Hickey announced that twenty-nine lettermen would be returning from the 1962 squad, some Tar Heel fans rolled their eyes, remembering that the ’62 team won only three games while losing seven. But Hickey quickly added, “It’s a veteran squad with many talented players. Our schedule is rugged, as always, but I feel certain we can give an excellent account of ourselves each Saturday.”

Turns out, Hickey was right. The ’63 Tar Heel team won eight games and was Co-ACC Champion, along with NC State.

The season started out with a come-from-behind-win against Virginia in Kenan Memorial Stadium on September 21, followed by a disappointing blow-out loss at Michigan State one week later.  Then came a five-game win streak with victories over Wake Forest, Maryland, NC State, South Carolina, and Georgia. Then, a second bump in the road versus Clemson in Death Valley followed by a final ’63 win in newly renovated Kenan over Miami.

So a showdown at Duke for an ACC title tie and a bowl invitation was originally scheduled for November 23, 1963; the assassination of President John F. Kennedy in Dallas on Friday, November 22, however, brought the season to a halt.  At first the forty-ninth meeting between Carolina and Duke was re-scheduled for Saturday, November 30.  Then, on Sunday, November 24, it was moved to Thanksgiving Day, November 28.  It would be only the third time the two teams had met on Thanksgiving and photographer Hugh Morton was covering his second Thanksgiving Day Duke-Carolina game.

The roads leading into Duke Stadium (now Wallace Wade Stadium) were crowded at 1:50 p.m. as traffic was backed up on highways N.C. 751 and Interstate 85.  The game was to begin at 2:00 p.m.  At 1:57, fans and players, both Duke and Carolina, faced the half-staffed flag and stood for a minute of silence to pay homage to President Kennedy.  This game was not like the Duke-Carolina battles of years past.  A subdued crowd of 47,500 remained standing as both bands, not in uniform because this was a class holiday, played the National Anthem.

At 2:02 p.m. the game began under cloudy skies.  After a scoreless first quarter, UNC’s great halfback Ken Willard saw his way through the left side of the line, got great blocks from John Hammett and Eddie Kesler, and dragged Duke’s Danny Litaker the final three yards into the end zone.  The play covered 14 yards. It was 2:55 p.m., the sun had come out, and Carolina led 7-0. There was no more scoring in the first half and there was no formal halftime show, but a Tar Heel fan swiped the Duke Blue Devil’s pitch fork and ran across the field, the Blue Devil in pursuit. One of the Duke cheerleaders made a head-on tackle, but the spear was tossed to a Tar Heel cheerleader who pitched it into the stands. Duke security police stood by and laughed.

Early in the third quarter, UNC completed a twelve-play-scoring-drive covering 77 yards, to take a 13-0 lead. Halfback Eddie Kesler scored from one yard out, but Tar Heel kicker Max Chapman missed the extra point. Duke came back on the following series with a 70-yard pass play from quarterback Scotty Glacken to halfback James Futrell.  With 4:15 remaining in the third quarter, the score was UNC 13, Duke 7, and the quarter ended with no additional scoring.

With just over five minutes remaining in the game, Duke’s Jay Wilkinson made one of the great plays of the game. With Duke at the Carolina 24-yard-line, he hit left tackle, cut back, faked UNC’s Eddie Kesler, and ran the distance for the score. Steve Holloway’s extra point gave Duke the lead 14-13. It was 4:12 p.m. and getting dark as that second quarter sun was nowhere to be seen.

With 4:58 on the game clock, Carolina got the ball back—but not for long.  Quarterback Junior Edge’s pass was intercepted by Duke’s Stan Crisson who returned to the Tar Heel 34-yard line. There were those in light blue who said, “We just gave Duke another victory.”  Duke, however, was unable to get a first down and Carolina got the ball on its own 28-yard line with 1:28 left to play.  Quarterback Junior Edge and left end Bob Lacey moved the ball steadily down the field.  When they reached the Duke 21-yard line, there was but thirty-eight seconds left in the game and it was fourth down and fifteen yards to go. Coach Hickey sent in kicker Max Chapman and holder Sandy Kinney. Chapman’s field goal was perfect and Carolina led 16-14. 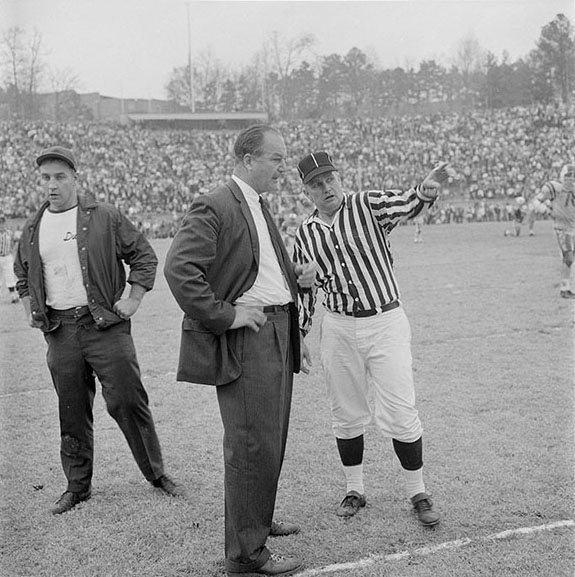 Duke head coach Bill Murray receives an explanation from a referee—probably after Max Chapman’s filed goal as the frame below is the next image on the roll of film. According to the High Point Enterprise sports write Bob Hoffman, “In a matter of seconds after UNC’s Max Chapman booted a 42-yard filed goal . . . Murray had charged onto the field and was chin-to-chin with one of the officials.” Murray said the clock didn’t stop after the field goal. The official contended that only six seconds clicked off the clock. Murray disagreed because, as he explained after the game, “I had gotten together a group of players to go back into the game, talked to the quarterback, run out onto the field and got the official’s attention to stop the clock. I just can’t move that fast.” (Scan of Hugh Morton’s negative is shown full frame.)

A long discussion among the officials and the time keeper followed, after which they reset the clock to 0:33.  Duke mounted a rally, but time ran out. It was 4:40 p.m and the game was over.  Two minutes later, UNC Athletic Director Chuck Erickson and Gator Bowl Selection Chairman Joseph G. Sykora stepped into the press box.  Said Erickson: “We’ve been invited to the Gator Bowl and we’ve accepted.”  The two men shook hands, and Sykora added, “I think I’ve seen a bowl game today.” 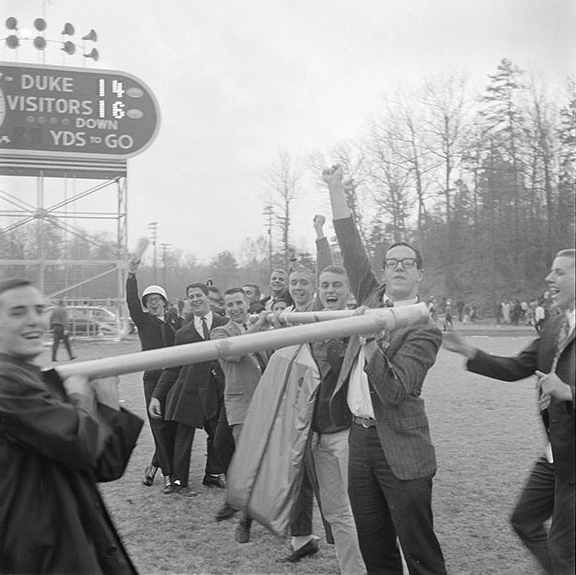 With the game in hand, UNC fans took the goal post into their own hands. Scan of Hugh Morton’s negative, shown full frame, follows the frame shown above. There are no identified game-action negatives in the Morton collection.

Twelve seasons had come and gone since UNC’s legendary All-America Charlie Justice led the 1949 Tar Heels into the 1950 Cotton Bowl. But Carolina was headed to its fourth bowl game, the nineteenth annual Gator Bowl in Jacksonville, Florida to meet the Air Force Academy.

Carolina went to St. Augustine, Florida and set up training headquarters in preparation for the December 28 game.  On Thursday evening, the 26th, the Tar Heels had a very special guest drop by their Ponce De Leon Hotel: ninety-one-year-old William Rand Kenan, Jr. dropped by to wish the team well.  (By the way, Mr. Kenan owned the hotel where the Tar Heels were staying.)  Back in Jacksonville, the Carolina crowd began to arrive at alumni headquarters in the Hotel Robert Meyer where UNC Chancellor William Aycock held a special reception on Friday, the 27th. 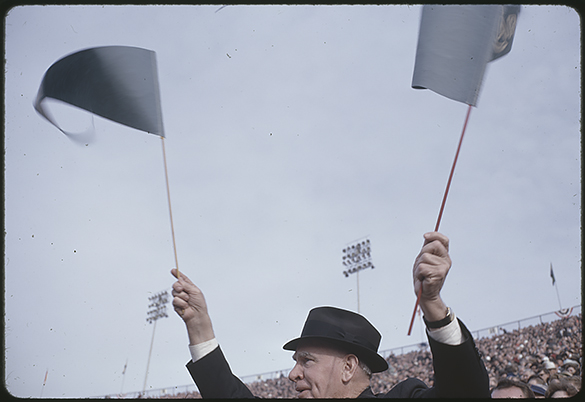 At 2:00 p.m. it was game time and CBS Sports was in place to send the game out nationally. Also in place was a sellout crowd of 50,018—10,000 of them Tar Heels— in the 70-degree weather with overcast skies. Hugh Morton was set to document his third Tar Heel bowl game. 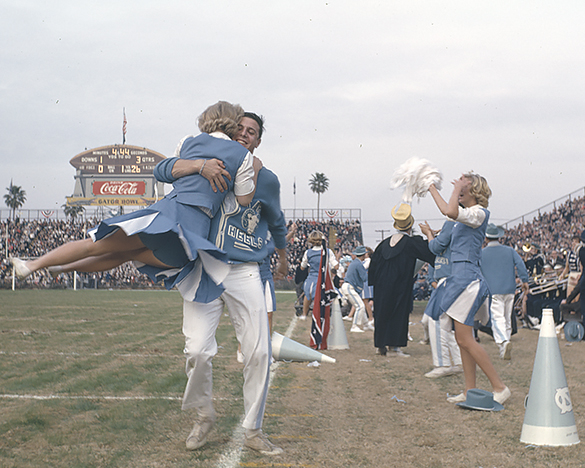 With the scoreboard reading 26-0 in the third quarter, a UNC male cheerleader, donning a now-classic sweater, swings his partner ’round and ’round during a moment on the playing field worth swirling about. Photograph by Hugh Morton, cropped from a 35mm slide by the editor.

Carolina’s 77-yard TD drive in the first quarter started things off and the boys from Chapel Hill never looked back. They led by 20-0 at halftime and picked up additional scores in the third and fourth quarters. The final score was a Gator Bowl record 35-0. UNC Halfback Ken Willard was the hero of the day with 94 yards in eighteen carries and one score—good enough to gain him MVP honors at the awards banquet at the George Washington Hotel in downtown Jacksonville. 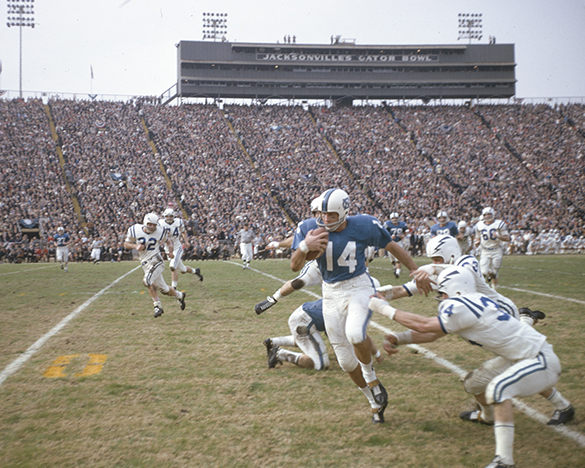 UNC quarterback “Junior” Edge (Bias Melton Edge Jr.), scampers toward the Air Force Academy’s 20-yard line. Based upon the play-by-play account in The Alumni Review and the scoreboard seen in a 35mm slides two frames later, this is probably Edge’s 10-yard run for a first down in during the first quarter. Photograph by Hugh Morton, cropped by the editor. At the time of this writing, it’s Morton’s only surviving action photograph from the game.

Following the game, Minnesota Vikings Head Coach Norm Van Brocklin and General Manager Bert Ross were on hand to sign Tar Heel end Bob Lacey to a pro contract. Also on hand was 1964 Miss America Donna Axum who had just returned from Greensboro and their Holiday Jubilee Parade.  “That was some weather we had for that Christmas Parade,” she said, adding, “But it’s better than we’ve had at home [Arkansas] the past week—eleven inches of snow.”  The following morning Axum would be rescued from a tragic fire at the Hotel Roosevelt in Jacksonville. 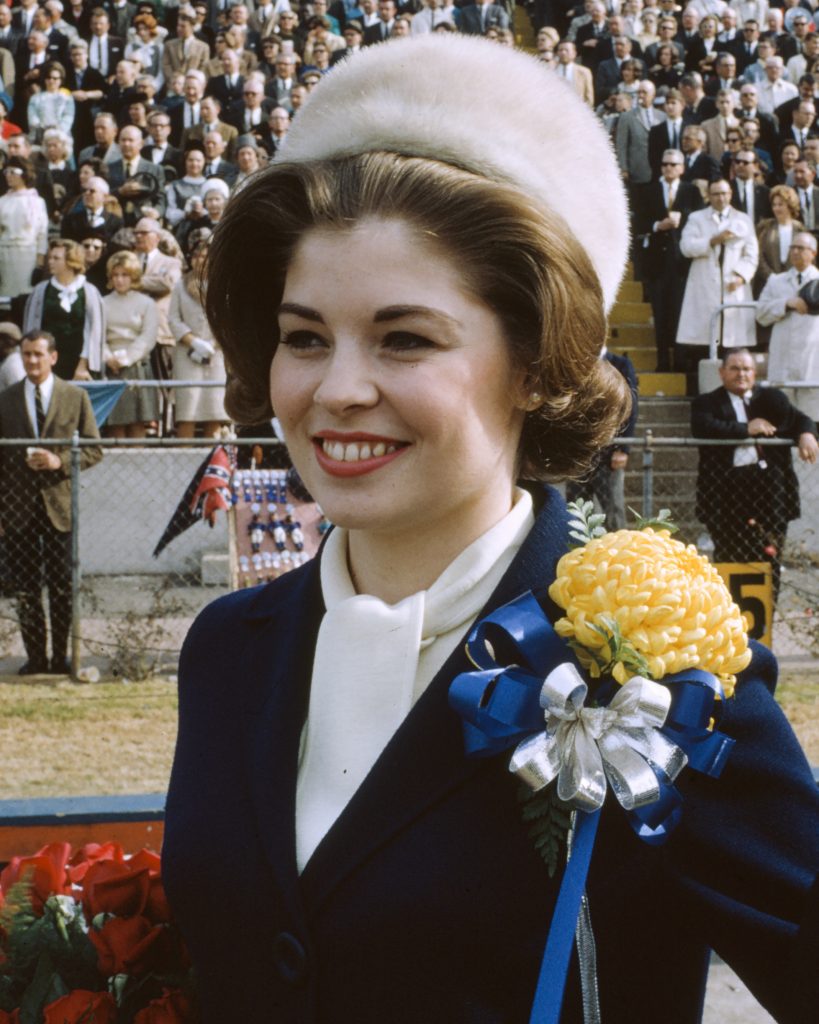 This unidentified woman appears to be 1964 Miss America Donna Axum, probably during pregame festivities. Photograph by Hugh Morton, cropped by the editor.

The headline in the New York Times on Sunday, December 29 read: “North Carolina Trounces Air Force in Gator Bowl, 35-0.”  The late Hall of Fame sportswriter Dick Herbert, writing in the Sunday, December 29 issue of Raleigh’s News and Observer, opened his report with this: “A superbly prepared North Carolina football team dropped the biggest bomb in the 19-year history of the Gator Bowl here Saturday as it destroyed the Air Force Academy team, 35 to 0.”

On December 28, 1963, for one brief shining moment, the football glory at UNC that had been missing since the “Charlie Justice Era” during the late 1940s had returned and Carolina football was once again in the big time.  The 1963 Tar Heels would be Coach Jim Hickey’s best team and likely his favorite. Jim Hickey passed away on December 27, 1997 at age 77.  On October 4, 2003 when Carolina played Virginia on letterman’s day in Kenan Stadium, the 1963 Gator Bowl Champs were honored on the 40th anniversary of their great win.

2005 The University held a groundbreaking ceremony for the new North Carolina Cancer Hospital.