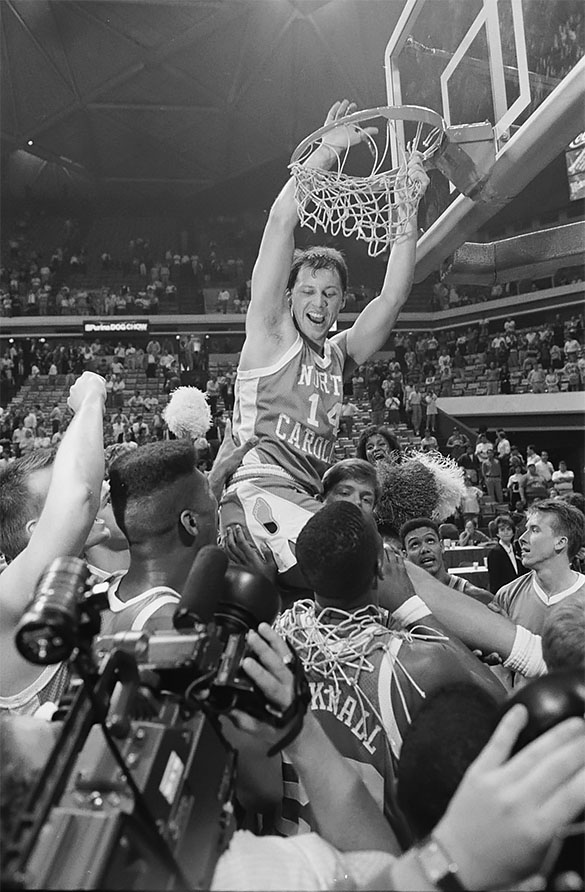 “March Madness” is only a week away when the 64th annual Atlantic Coast Conference Men’s Basketball Tournament takes place starting today, March 7, through March 11, 2017 at the Barclays Center in Brooklyn, New York.  Officially, it’s the “New York Life ACC Tournament,” but a title sponsor has not always been attached.  That addition is just one of the many changing facets of this classic sporting event that have taken place over the years— and photographer Hugh Morton was there for twenty-one (at least) of them between 1954 and 2005.  On day one of the ACC Tournament, Morton collection volunteer and A View to Hugh contributor Jack Hilliard takes a brief look at the record book.  Within the story, you may follow the links to see Morton’s photographs for the years available in online collection. (Not all the years photographed by Morton are available in the online collection.  See Series 6.1 in the collection finding aid for a full listing.)

In early March, 1997, the ACC Tournament was staged in Greensboro for the 17th time, but the front page basketball story in the March 9th edition of the “News & Record” was titled “Shooting with the Best of Them: At 76, Hugh Morton still keeps life in focus.”  The article told the Hugh Morton story and how he had covered the ACC tournament starting back in 1954. In fact, feature writer Jim Schlosser’s article said:  “He’s been shooting Carolina wins, and the occasional loss, in every ACC tournament, save one, since the first in 1954 in Raleigh.”

The fifteen-team league competing for the 2017 ACC Tournament Championship is a far cry from the league that Morton first photographed in 1954 when only 8 teams made up the conference. That ’54 tournament was played in Raleigh’s William Neal Reynolds Coliseum and was won by Coach Everett Case’s NC State Wolfpack…an 82 to 80 overtime thriller against Coach Murray Greason’s Wake Forest Demon Deacons.  State went on to win the event in ‘55 and ’56 before North Carolina won its first tournament in 1957. And Carolina continued its winning ways as the NCAA Champion that year…the first North Carolina based team to do that since the official formation of the Atlantic Coast Conference in May of 1953.

The University of Maryland won the 1958 tournament, defeating the defending champion Tar Heels as the Terps became the first out-of-North Carolina tournament champion.  In ’59, NC State came back as a winner for the 4th time with a win over UNC.

Duke beat Wake Forest for its first ACC Tournament in 1960, while Wake beat Duke in ’61 for its first tournament win. Wake won again in ’62.  During the next four years, Duke won three more times and State won in ’65. Hugh Morton photographs can be seen in the online collection for the UNC vs USC semifinal game in 1963 and the Duke vs NC State first-round game in 1964.

Following NC State’s 1970 win in Charlotte over South Carolina, it was back to Greensboro for the next five years.  South Carolina won its only ACC Tournament in 1971 and Carolina and State split the next four years: Carolina winning in 1972 and 1975, and State winning in 1973 and 1974—and of course State won the National Championship in 1974, the only time the “Final Four” championship round has been played in Greensboro.

In 1976, the tournament moved to the Capital Center in Landover, Maryland where Virginia won its first ACC Tournament, beating North Carolina 67 to 62.  It was back to the Greensboro Coliseum in 1977 for a four year stint.  Carolina and Duke split with UNC winning in 1977 and 1979 and Duke winning in 1978 and 1980.  (Note: four photographs in the online collection lack definite identifications with “late 1970s” being the estimated date range, and another photograph only dated as “1980s” appears for all searches for the years 1980 through 1989.  Please try your hand at identifying the photographs and leave a comment with your findings!)

Carolina won in 1981 back at Capital Center, and then again in Greensboro in 1982, where the Tar Heels won the NCAA Championship again 1982.  The tournament moved again in 1983—this time to the Omni in Atlanta where NC State won over Virginia and went on to its second NCAA Championship.  Maryland beat Duke back in Greensboro in 1984 and Georgia Tech won its first ACC Tournament at the Omni in 1985, beating North Carolina.

Since Morton made “tournament headlines” in Greensboro in 1997, the ACC Tournament has played out nineteen times and Morton’s Tar Heels have won only four of those events, while Duke has won ten. (And it should be pointed out that Duke’s wins in 2001, 2010, and 2015 were followed up with NCAA championships). Florida State, Miami, and Notre Dame have added one win each while Maryland and Virginia have added one each to their championships lists.  Also, the tournament has added two additional venues since 1997: DC in 2006 and Tampa, Florida in 2007.

Ten years after Tampa was added, the tournament moves to Brooklyn, New York in 2017—where Duke will be going for overall tournament championship number twenty, UNC will be going for number nineteen, NC State will be looking for number eleven, and Wake Forest number five.  But as ACC basketball goes, any one of the now fifteen member teams could win in the “Big Apple” this March as “Madness” abounds.