On March 18th, 2012 Bill Richards, a colleague who worked in the library’s Digital Production Center, passed away unexpectedly while watching the Tar Heel’s basketball team defeat Creighton University in the “Sweet Sixteen” round of the NCAA Men’s Basketball Tournament.  In … Continue reading → 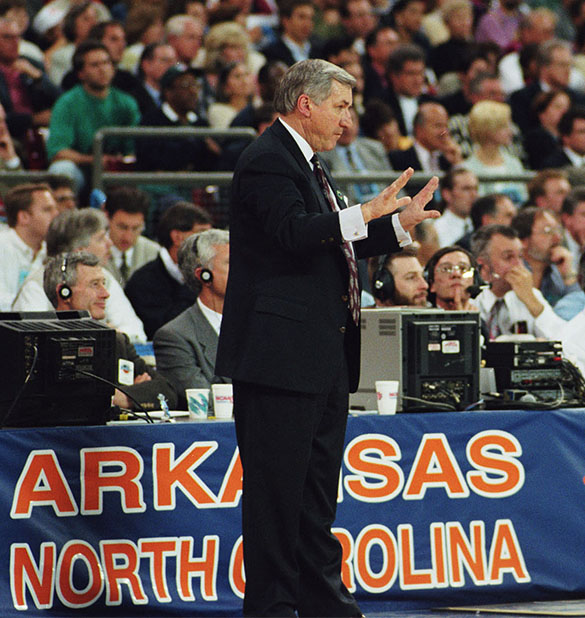 UNC head basketball coach Dean Smith on sidelines during national semifinal match-up against Arkansas in the Kingdome in Seattle, Washington on April 1, 1995. (Hugh Morton photograph cropped by the author.)

On March 18th, 2012 Bill Richards, a colleague who worked in the library’s Digital Production Center, passed away unexpectedly while watching the Tar Heel’s basketball team defeat Creighton University in the “Sweet Sixteen” round of the NCAA Men’s Basketball Tournament.  In 1982, Bill was the Chief Photographer for the Chapel Hill Newspaper.  In 1988, he began working as a photographer and graphic designer in the UNC Office of Sports information.  In 1998 he started working in Library Photographic Services, but continued shooting for Sports Information into the 2000s.  I am dedicating this blog post, as I have each year since his departure, to Bill who, like Hugh Morton, was an avid UNC basketball fan.

Here we are again . . . it’s March Madness time and UNC is in the NCAA Mens Basketball Tournament for the forty-seventh time.  Yesterday’s 103 to 64 first-round win against Texas Southern, coupled with Arkansas’ 77-to-71 defeat of Seton Hall, set up the sixth tournament meeting between the Tar Heels and Razorbacks.  Hugh Morton photographed three of those contests in 1990, 1993, and 1995. In the latter two face-offs, the victors continued on to win the national championship. 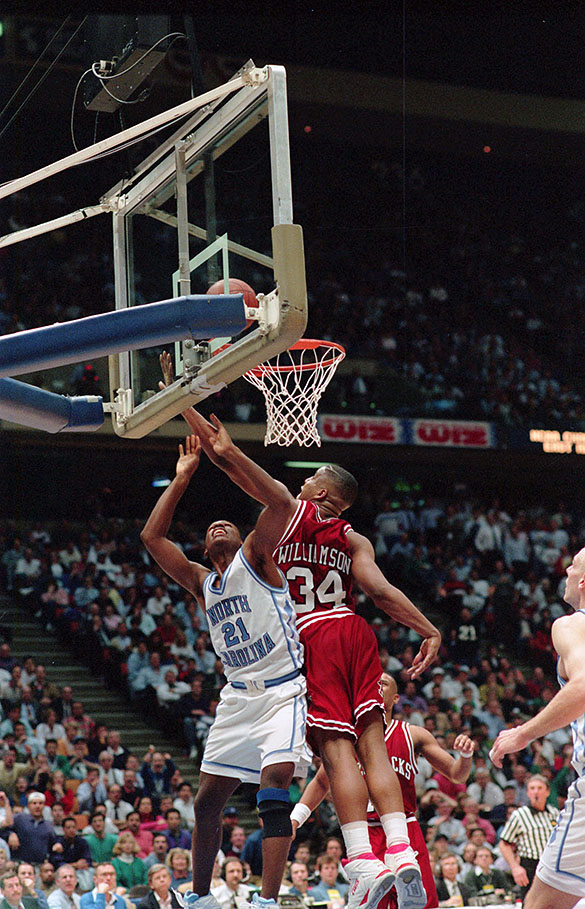 The first of these two encounters was the 1993 tournament’s East Regional Semifinals played at East Rutherford, New Jersey.  Arkansas was fueled by eleven three-pointers, but but UNC’s sophomore guard Donald Williams scored the last nine Tar Heel points—including three foul shots at the end—to clinch the game 80 to 74.  At one point in first half Arkansas led by eleven, but the game was often close.  The score at halftime was 45 to 45, and with 6:30 left to play it was 69 to 69.  It was then that North Carolina’s Brian Reese bucket gave the Tar Heels a  lead that would not give back.

A monstrous dunk by 245-pound Razorback freshman Corliss Williamson bought  Arkansas to within two points, 73 to 71, and their fans leapt to their feet.  With just over a minute to play in the game, Carolina held onto a 75-to-74 lead.  UNC’s legendary coach Dean Smith called a time out at the 0:51.7 mark and drew up play.  Rather than stall in a patented four-corners set, he designed a quick-scoring backdoor pass from George Lynch to Williams for a lay-up that extended the score to 77 to 74 with 0:42 seconds left.  An Arkansas turnover forced the Razorbacks to foul Williams.  He iced the free throws and capped the Tar Heel victory.  George Lynch led UNC in scoring with twenty-three points and ten rebounds.  Eric Montrose added fifteen points.  The win sent the Tar Heels to the East Regional Finals against Cincinnati. 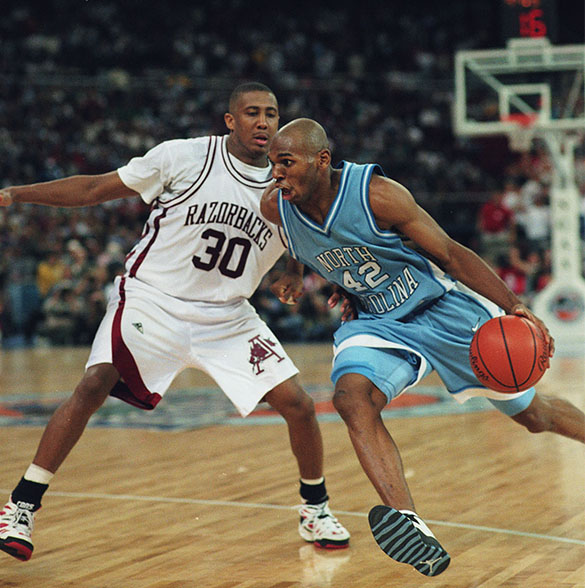 April Fools Day was no laughing matter for UNC in the 1995 NCAA tournament when the Hogs beat the Heels 75 to 68 in the tournament semifinal played at the Seattle Kingdome.  UNC had returned to the Final Four after exiting early in 1994, and Arkansas was the returning national champion.  UNC led at the half 38 to 34.  The score would normally have been 38 to 31, but Arkansas’ Dwight Stewart heaved a 55-foot shot at the buzzer that found nothing but net to end the first half.  The bomb enlivened the lackluster Razorbacks and left the Heels stunned.

The energy boost carried Arkansas well into the second half, reeling off an early 17-to-5 run.  UNC suffered twelve-and-a-half minutes without a score until a three-pointer by Stackhouse with 15:14 left to play.  Carolina closed the deficit to one, 69 to 68, with 47.7 seconds left, but the Tar Heels scoring ended there.  They made only seven shots in the closing half after hitting fifteen in the opener, including seven threes.  Equally domineering, Arkansas made ten shots from close-range inside the paint in the second half, compared to Carolina’s two.  Donald Williams, now a senior, finished with nineteen points, but Corliss “Big Nasty” Williamson scored the same amount in just the second half, finishing with twenty-one. UNC’s Jerry Stackhouse scored eighteen.

Arkansas coach Nolan Richardson said afterward, “We’re called the ‘Cardiac Kids’ and we tried to do it again.” With their victory Arkansas earned the right to defend their title against UCLA, which defeated Oklahoma State 74 to 61. UCLA, however, denied the Razorback repeat by scoring an eleven-point win, 89 to 78.  After the season, as a junior, Williamson declared for the 1995 NBA draft and was the thirteenth pick overall by the Sacramento Kings.  From UNC, Jerry Stackhouse was the third overall pick by the Philadelphia 76ers, and the Washington Bullets selected Rasheed Wallace next as the fourth selection.  Both Stackhouse and Wallace left UNC as sophomores.

Morton also photographed the North Carolina versus Arkansas regional semifinal in March 1990 won by Arkansas 96 to 73, but there are no images of that game in the online collection of images.