When Gwendolyn Harrison decided to come to UNC to pursue a Ph.D. in Spanish, she went through the usual process: she applied and was accepted, and she was assigned a room in one of the women’s dormitories. She arrived on … Continue reading →

When Gwendolyn Harrison decided to come to UNC to pursue a Ph.D. in Spanish, she went through the usual process: she applied and was accepted, and she was assigned a room in one of the women’s dormitories. She arrived on campus in June 1951, checked into her dorm, and went to begin the registration process. When she returned to her dorm, a university employee told her that there had been a mistake: Harrison’s registration was cancelled and should would not be allowed to attend UNC that term. The reason? They had not realized that Harrison was an African American. 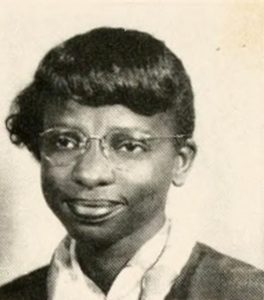 Believing that the ruling applied to all of the graduate programs at UNC, Harrison, who was from Kinston, assumed that she would finally be able to attend her home state university. In a letter to a local newspaper, Harrison wrote, “I was proud because I thought that North Carolina at least was about to live up to the democratic ideals which are a part of the heritage of our great land.”

Harrison’s story encapsulates the upheaval on campus as administrators and trustees struggled to accept that the University’s practice of excluding African American students — which had been in place for more than 150 years — was coming to an end. Their responses wavered between confusion, caution, and resistance.

While campus administrators were anticipating the first African American law students in 1951, Harrison’s arrival was a surprise. Her application did not ask for her race, but her dormitory reservation card did. 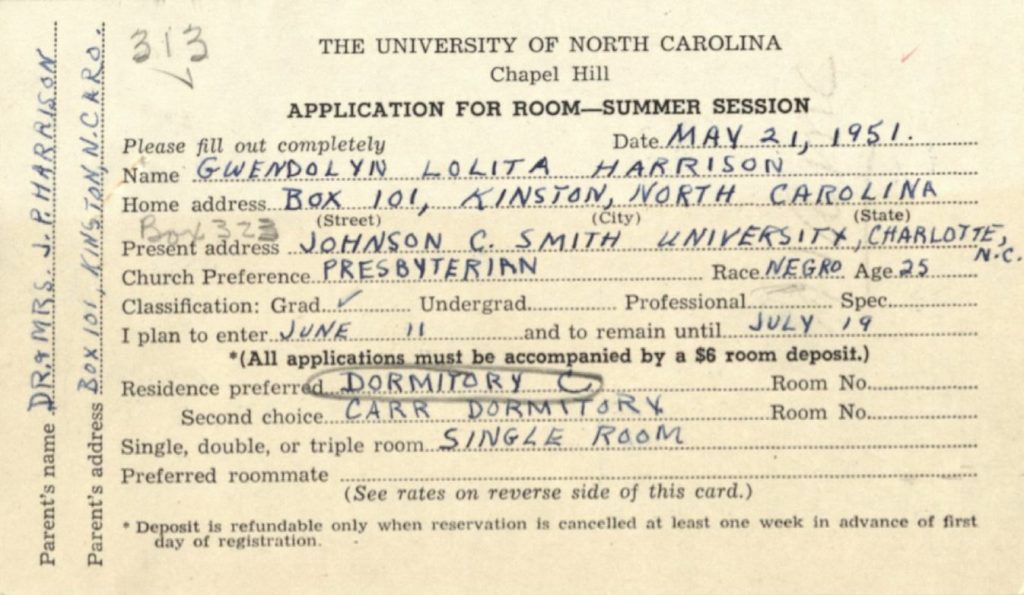 After Harrison’s enrollment was cancelled, she immediately appealed to University administrators. Both W.W. Pierson, Dean of the College of the Graduate School, and Chancellor Robert House told Harrison that the question of her enrollment was out of their hands and that it had to be resolved by the Board of Trustees at their June meeting. Harrison wrote the next day to Governor Bob Scott, who was the chairman of the UNC Board of Trustees.

Harrison was not going to wait. Working with attorney C.O. Pearson of the North Carolina NAACP, she announced her intent to sue the University. The suit was filed in early July and Chancellor Robert House received a subpoena ordering him to appear in the United States District Court in Greensboro on July 12, 1951. Likely wary of getting involved in more legal struggles and probably aware of the University’s weak position in denying Harrison when other African American students were already enrolled in graduate programs, the University agreed to settle. On July 16, 1951, a few days after negotiating a delay in the trial, House wrote to Dean Pierson of the graduate school, telling him to inform Gwendolyn Harrison that she was admitted to UNC.

Harrison was able to enroll in the second summer session of 1951. In doing so, she became the first African American woman to attend UNC. She returned to Chapel Hill for summer school in 1952, but did not pursue any further education at Carolina. She returned briefly to teaching at Johnson C. Smith and then spent most of her adult life in Bessemer City, N.C.

Gwendolyn Harrison Smith passed away last month. In an obituary in the Gaston Gazette, family members noted that she rarely talked about her role in the long struggle to integrate UNC. Perhaps due to her brief time at Carolina, as well as the fact that she followed so closely behind the first African American students, who received a great deal of media attention, her story has been rarely told in accounts of UNC history. Neal Cheek, in his 1973 dissertation about the integration of UNC, includes a thorough account of Harrison’s efforts to attend UNC, and she has been occasionally noted as a trailblazer, though not nearly as often as other Carolina “firsts.”