The arrival of commencement weekend gives us a welcome opportunity to look back at spring traditions at UNC. The NCC Gallery honors those traditions with a display of Carolina traditions, including this Jubilee program and pinback button — our May Artifacts of the Month. Jubilee was an annual concert that celebrated the end of the […]

The arrival of commencement weekend gives us a welcome opportunity to look back at spring traditions at UNC. The NCC Gallery honors those traditions with a display of Carolina traditions, including this Jubilee program and pinback button — our May Artifacts of the Month. 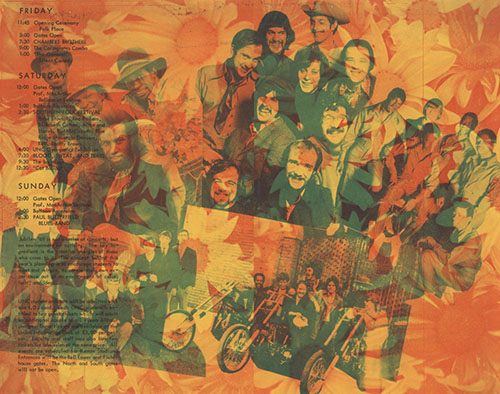 Jubilee was an annual concert that celebrated the end of the spring semester at Carolina from 1963 to 1971. What began as a small concert featuring a few acoustic performers in front of Graham Memorial in 1963 grew to become a can’t-miss festival-style rock show at Navy Field in 1971.

Over the years, Jubilee brought performers in a variety of genres to UNC, including Johnny Cash and June Carter, Neil Diamond, the Temptations, Joe Cocker, the Association, B.B. King, the Chambers Brothers, Paul Butterfield Blues Band, and Blood, Sweat, and Tears — as well as lesser-known (or less remembered) acts.

The 1969 UNC Yearbook, the Yackety Yack, called it “The biggest weekend of the year — of the past three years.”

The program from that year describes the event in these groovy terms:

Jubilee ’69 is not a series of concerts, but an environment for activity. The key ingredient is the creative energies of those who come to it. The concept behind this year’s planning is to encourage students to meet and mingle, to create their own experience out of an environment of color, form, and ideas.

Two years later, in 1971, Jubilee imploded under its own excess.

In advance of the ’71 event, the Daily Tar Heel reported that Jubilee would have a new, small stage in addition to the main stage. The small stage would provide “entertainment ranging from cartoons to concerts featuring standouts at the Union Grove Fiddlers Convention,” as well as the UNC Jazz Lab Band and Durham soul act Shamrock.

According to the article:

In addition to the major concerts and the entertainment on the small stage, Jubilee ’71 will include an Astro-bounce, a slip and slide, balloons, soap bubbles, three large foam rubber piles and all kinds of food.

Carolina Union President Richie Leonard was quoted by the DTH saying he hoped the activities “will keep as many people as possible involved at all times.”

The event, which had been getting larger and more unruly for a few years, had reached maximum mayhem. Gatecrashers tore down fences, the huge crowds damaged the grounds at Navy Field, and noise complaints multiplied.

A week afterward, the Student Union Activities Group called an end to Jubilee, recommending that it be replaced by smaller events spread throughout the year.

The University Archives holds a film from 1971 Jubilee in the Records of the Student Union. A short clip from the beginning of the film is available here:

For the next two years, students argued for Jubilee’s revival, with student government candidates making its reinstatement part of their election platforms.

The name Jubilee was eventually revived for a new annual spring concert — but not until 2015, when the Carolina Union Activities Board brought hip-hop act Rae Sremmurd to Hooker Fields. But the smaller, more contained 21st-century Jubilee resembles its wild namesake in title only… for now.

If you’re curious about other spring traditions at Carolina, stop by the Gallery and see our exhibit!

1995 Although virtually unenforceable for twenty-seven years, the Speaker Ban Law was finally repealed by the General Assembly.