In the mid 1980s, UNC students actively campaigned to convince the University to divest from investment in South Africa in protest of the legalized segregation in place under that country’s apartheid system. This timeline presents an overview of major dates … Continue reading → 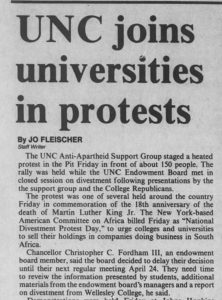 In the mid 1980s, UNC students actively campaigned to convince the University to divest from investment in South Africa in protest of the legalized segregation in place under that country’s apartheid system.

This timeline presents an overview of major dates and activities on campus.

1978-1979: Students at Harvard and several other American universities begin advocating for university endowments to stop investing in South African companies. The students argue that providing financial support for South African business provides indirect support to the government and its formal policy of racial discrimination (apartheid). UNC administrators discuss the issues but decide not to make any changes to the university’s investment policy at the time. Source: Office of the Chancellor, Nelson Ferebee Taylor Records #40023, box 11, “Sullivan Principles 1978-1979.”

April 23, 1983: UNC Endowment Board rejects divestment but says they will not invest in South African companies unless they agree to the “Sullivan Principles,” described as a voluntary code of racial equality for companies doing business in South Africa. Source: Daily Tar Heel, April 7, 1986. 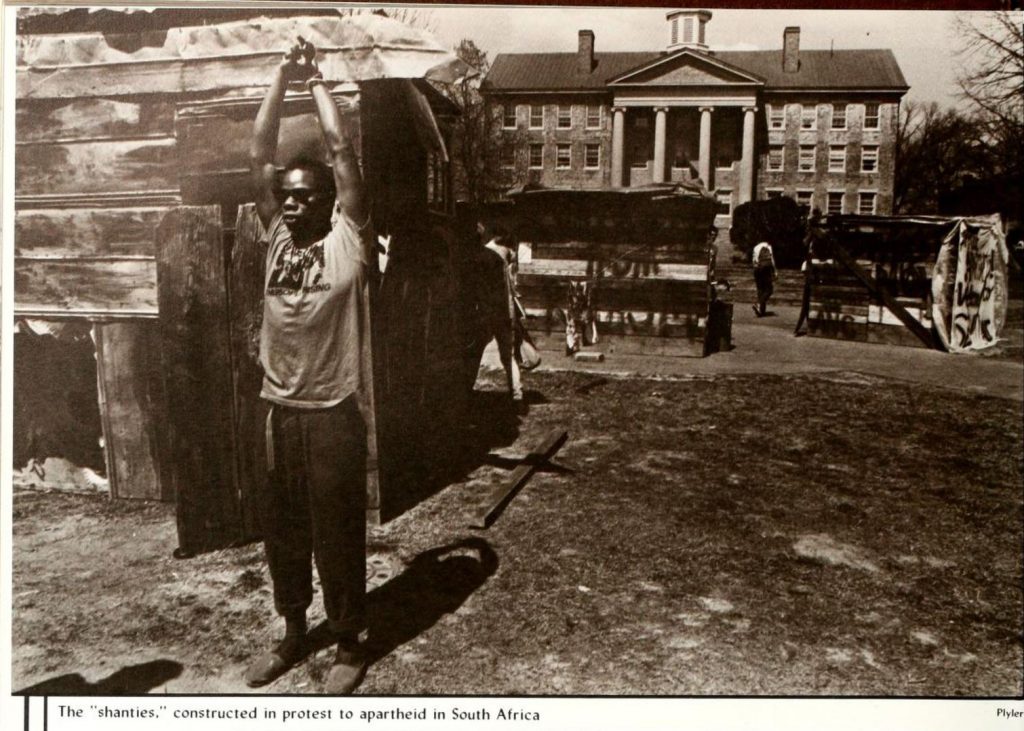 March 18, 1986. The UNC Anti-Apartheid Support Group builds several shanties in front of South Building in order to draw attention to their cause and to express sympathy for South Africans forced to live in shantytowns. Campus police dismantle the structures, which are rebuilt later in the day after the group receives permission from Chancellor Fordham. Source: Daily Tar Heel, March 19, 1986.

March 31, 1986. Two student groups, the College Republicans and Students for America, stage a counter protest in front of the shanties by construction a mock “Berlin-type wall.” The counter-protesters spoke out against oppressive governments in South Africa and the Soviet Union. The Daily Tar Heel quoted the College Republicans Chairman: “(The wall) is to show that there are other atrocities around the world that are even far greater than those in South Africa. It is hypocritical to just call for divestment (in South Africa). If you say you’re against ‘immoral governments’ then you should do it across the board.” The counter-protesters also objected to the extended presence of the shanties. Source: Daily Tar Heel, 1 April 1986.

April 24, 1986. University Endowment Board meets in a “very argumentative” secession and votes against total divestment, electing partial measures and agreeing to place pressure on South African companies to encourage them to abandon Apartheid. Chancellor Fordham supports divestment and says “we did not get the vote I wanted.” Student protesters hold a sit-in followed by a march down Franklin Street to protest the decision. Source: Daily Tar Heel, April 4, 1986. 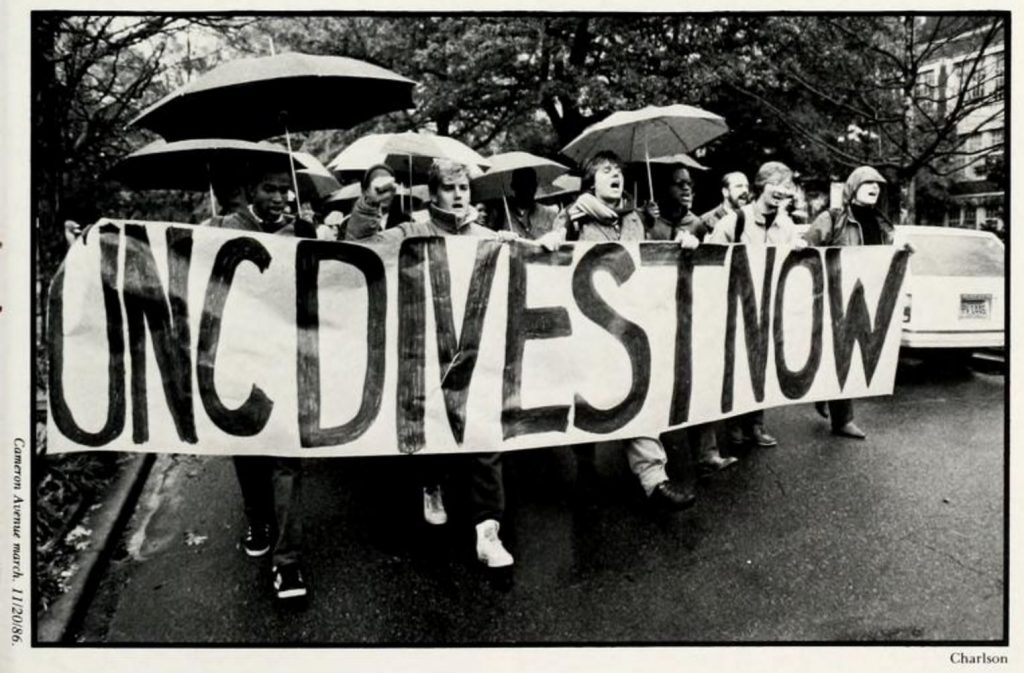 May 1987: A group of students from Action Against Apartheid hold an eight-day hunger strike to protest UNC investment in South Africa. Source: Daily Tar Heel, 21 May 1987.

October 1, 1987: UNC Endowment Board agrees to divest all funds from South African companies. The change of mind is due partly to the ongoing protests, but also due to diminishing returns in those funds. Source: Daily Tar Heel, 2 October 1987.