On Tuesday, June 7, 2016—one year ago today—a special memorial service was held at the Old Chapel Hill Cemetery on Raleigh Road. The University of North Carolina at Chapel Hill had lost one of its strongest supporters. Three days before, … Continue reading → 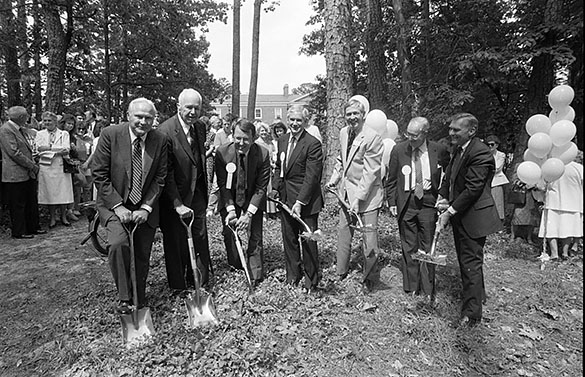 On Tuesday, June 7, 2016—one year ago today—a special memorial service was held at the Old Chapel Hill Cemetery on Raleigh Road. The University of North Carolina at Chapel Hill had lost one of its strongest supporters. Three days before, Ralph Strayhorn Jr. had passed away in Winston-Salem. He was 93-years-old.  On this anniversary, Morton Collection volunteer Jack Hilliard looks back at Strayhorn’s amazing list of accomplishments.

Ralph Nichols Strayhorn Jr. at one time or another served his university as

A native of Durham, Strayhorn was recruited by UNC assistant football coach Jim Tatum and played three seasons with the Tar Heels before he entered the United States Navy and served in the Pacific theater from 1943 until 1946, completing his active service as a sub-chaser commanding officer.  He served twenty years in the U. S. Naval Reserve, retiring in 1962 as a lieutenant commander.

He returned to Chapel Hill in time for the 1946 football season where he was a cocaptain along with Chan Highsmith.  In a 2010 interview, Strayhorn described his returned: “It was a delightful time to be in Chapel Hill.  Everyone was glad to be home from the war, back in school where they belonged.”

The 1946 Tar Heels under Head Coach Carl Snavely won eight games during the regular season while losing only to Tennessee and tying VPI (formally Virginia Polytechnic Institute and State University, known today as Virginia Tech).  That record was good enough to earn a Southern Conference championship and Carolina’s first bowl game, the Sugar Bowl on January 1, 1947. Strayhorn’s trip to New Orleans was not a joyous occasion as it should have been. His father had suffered a heart attack back in Durham and was unconscious.

“My mind wasn’t focused on the game, needless to say.  I thought about not going.  My first cousin was a doctor and was very close to our family.  He said my father would want me to go and play in that game.  I stayed behind when the team left and then caught the last train to New Orleans. . . I was on the first train back out of town.  I returned to my father’s bedside but he never recovered.”

Strayhorn could have played one more season with the Tar Heels.  The 1943 season didn’t count against his eligibility because he had gone off to World War II; he chose, however, to graduate with the class of 1947 with a degree in commerce and enter law school.  He got his law degree in 1950 and joined the firm of Newsom, Graham, Strayhorn, Hedrick, Murray, Bryson and Kennon as a senior partner.  He held that position until 1978 when he assumed the executive position of general counsel of the Wachovia Corporation and the Wachovia Bank and Trust Company.  Strayhorn retired from that position until his 1988 retirement.  He then joined the law firm Petree Stockton & Robinson.

Throughout his professional career, Ralph Strayhorn remained active in the life of his alma mater, especially its athletic programs and his beloved football Tar Heels. From 1973 until 1981 he was a member of the UNC Board of Trustees, serving as chairman in 1979 and 1980.  Additionally, he served on the Central Selection Committee of the Morehead Foundation, the Board of Visitors, and the NC Institute of Medicine.  In 1989 Strayhorn the UNC Board of Trustees awarded Strayhorn the William Richardson Davie Award.

Over the years, Strayhorn kept in touch with Coach Jim Tatum and in 1955 he wrote Tatum a four-page letter asking him to return to Chapel Hill to take over the football program.  “The football situation at Chapel Hill seems to have reached an all-time low,” Strayhorn wrote. The following year Tatum returned and led the program until his untimely death in July of 1959.  Ironically, in 1957 Strayhorn had prepared Tatum’s will and delivered the document to him the week before the Tar Heel were to meet Maryland for the first time since Tatum left—the famous “Queen Elizabeth” game. As the coach was signing the document, he asked Strayhorn if he was going to the game on Saturday.

“I told him I didn’t have tickets, transportation, a room or a baby-sitter.  He said, ‘Well, find yourself a baby-sitter.  I’ll take care of the rest. You be at the airport Friday at 2 o’clock.’ We got to the airport and everything was arranged for us.” 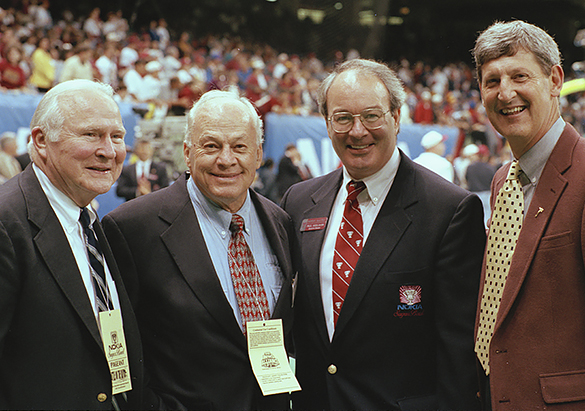 In December 1996 Carolina’s 1947 football team celebrated the 50th anniversary of their ’47 Sugar Bowl game with a train trip to New Orleans for the 1997 Sugar Bowl game.  An on-the-field pre-game ceremony included Charlie Justice and Ralph Strayhorn along with Charlie Trippi of Georgia.  Hugh Morton was a special invited guest at the ceremony. 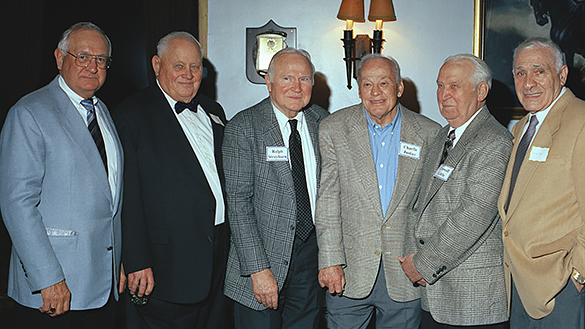 And oh yes . . . that list.  Ralph Strayhorn Jr. was President of the North Carolina Bar Association in 1971-72, and a member of the

He also argued a case before the Supreme Court of the United States and served in the North Carolina General Assembly in 1959.

Ralph Nichols Strayhorn Jr., a Tar Heel treasure like no other.