When Carolina met Duke on November 25, 1950 in historic Kenan Memorial Stadium, we didn’t know it at the time, but it would be Duke Head Football Coach Wallace Wade’s last coaching appearance against his rival from Chapel Hill. Over a … Continue reading →

When Carolina met Duke on November 25, 1950 in historic Kenan Memorial Stadium, we didn’t know it at the time, but it would be Duke Head Football Coach Wallace Wade’s last coaching appearance against his rival from Chapel Hill. Over a 16 year period from 1934 through 1950, UNC Coach Carl Snavely met Duke Coach Wallace Wade seven times on the gridiron. Snavely won 5 of those games. Wade won in 1935 in Durham and his only win against Snavely in Kenan Stadium came on a cold day in November of 1950.

As official football practice gets underway today for Carolina’s 2017 football season—the 91st in Kenan Stadium, and the 104th meeting with Duke on September 23rd—Morton collection volunteer Jack Hilliard recalls that famous game from 66 seasons ago. 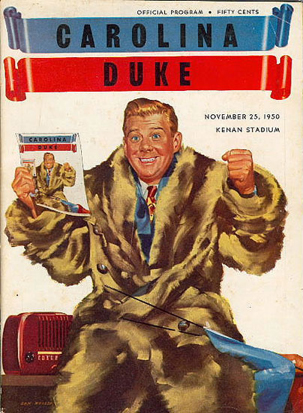 I remember, as a little kid, my dad telling my mom, as he left for work early Saturday morning, November 25, 1950, “I guess Carolina and Duke will play in the snow today.” Had it not been for the covering on Kenan’s turf, my dad would have been right.  On Friday the 24th, high winds, snow and bitter 15-degree temperatures moved into North Carolina.  The headline in Saturday’s Durham Sun, read: “Vicious Icy Storm Batters East.”

A check of the 1950 UNC football media guide, which was actually published in August, indicated the game was already a sellout. 40,000 of those ticket-holders braved the weather and came out for the game . . . the other 6,000 decided to stay home by the fire and the radio.  Photographer Hugh Morton was one of the former.

Head coach Carl Snavely’s North Carolina Tar Heels had beaten head coach Wallace Wade’s Duke Blue Devils the past four seasons and the Heels were made a slight favorite in this, the 37th meeting between the two rival schools.  Wade and Snavely had tremendous respect for each other.  In July of 1950 the two rival coaches appeared together in the North Carolina outdoor drama “The Lost Colony.”  They were special guests as part of Kay Kyser’s and Emma Neal Morrison’s “Celebrity Night” celebrations.  Going into the 1950 “battle of the blues,” the darker blue, Blue Devils were 6 and 3 on the season, while the lighter blue Tar Heels were 3-3-2.

As one might guess, wind was to be a factor in the game, so when the Tar Heels won Referee Orrell J. Mitchell’s toss, they elected to defend the west goal with the wind at their backs.  The Tar Heels moved the ball inside the Duke 25-yard-line twice in the first half, but couldn’t score.  Duke’s only first-half threat came near the end of the second quarter.  The Blue Devils went on a 44-yard drive to the Carolina 36-yard-line, mainly through the efforts of Duke captain Billy Cox’s running and passing, but they couldn’t score. The score at halftime was 0-0.

Because of the weather, there was no halftime entertainment on the field.  Fans had to be content reading through their game-day programs, which on this day featured a front cover Lon Keller image of radio and TV personality Arthur Godfrey.  You could read a column by UNC’s Jake Wade or Duke’s Ted Mann, and get their takes on the game. 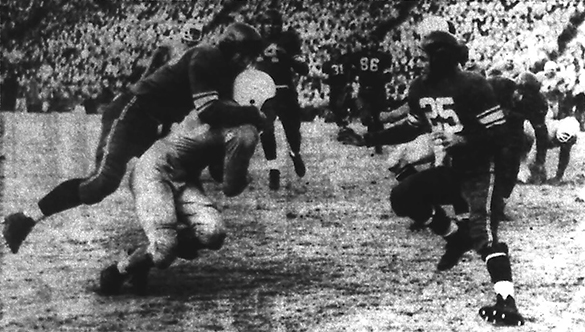 Hugh Morton’s photograph published in the November 27, 1950 issue of the Charlotte News with the caption, “Dick Bunting fights his way to the Duke 22 in the fourth quarter of the North Carolina game at Chapel Hill, but Blaine Earon is there to slam him down. This threat, like five others, failed.” A search for this negative in the Morton collection did not turn up the negative.

At the 2:58 mark of the third quarter, Coach Wade decided to gamble.  Duke with the ball, fourth down at the Carolina 34 and needing seven yards for a first down, tailback Billy Cox took the direct snap from center J. E. Gibson . . . looked down field . . . spotted wingback Tommy Powers . . . and threw a perfect shot which Powers caught as he crossed the goal line.  Mike Souchak’s point-after made the score 7-0. 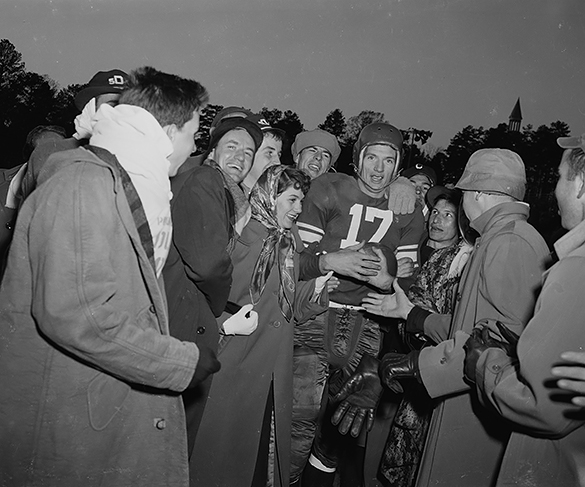 Scan of Hugh Morton’s negative (as shot) of Duke’s Billy Cox holding the game ball after a 7-0 win over UNC at Kenan Stadium, 25 November 1950. This image appears in the sports sections of the Wilmington Morning Star and the Charlotte News. The latter identified the woman next to Cox as Mona Booth, Miss Durham of 1950. Other Morton photographs appeared in those newspapers (shown below), but the negatives either have not yet been located in the collection or have not survived.

During the final quarter and a half, Carolina had three great opportunities, but the score remained 7-0.  The final game stats showed that Carolina had first downs at the Duke 22, 17, 28, 9, 7, and 20, but could not score.  In his post game interview, Wade praised Duke’s incredible defense.

As the game ended and the late November sky began to turn a darker shade of gray, the Duke players rushed to hoist their victorious coach on their shoulders; but as we had come to expect, Coach Wade wanted no part of anything like that.  Wade told his players, “No, no, boys there’ll be none of that. Let’s go shake their hands.” He then walked calmly across field for a final time and shook Snavely’s hand, just as he had done on six previous occasions when the two coaches had played one another.  It would be Wade’s first, final, and only win in Kenan Stadium against a Snavely-coached Tar Heel team. 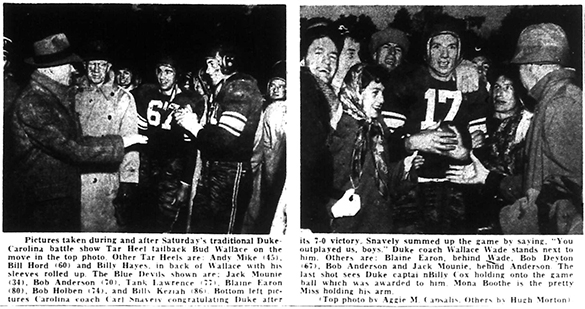 When the field cleared, the Carolina cheerleaders, led by head man Joe Chambliss, rolled the Victory Bell across the cold Kenan turf to the Duke section on the North side of the stadium, as the Blue Devil fans cheered.  It was their first opportunity to ring the bell since its introduction following Carolina’s 1948 win. (That respectful type Victory Bell transition seems to have been forgotten in today’s world of overwrought fan and player hostility.)

The headline in Sunday’s Charlotte Observer, read: “Blue Devils’ Gamble Pays Off for Score in High Wind and Freezing Temperature.”  Coach Snavely, when asked in his Monday morning news conference about his impression of Saturday’s game, had this to say: “Duke was hotter than we were in several crucial moments. . . . You must remember that Duke played in the same weather we did.”

Four days after the game, Wade married Virginia Jones and after a honeymoon in New York, he announced his resignation from Duke in order to take the position of Commissioner of the Southern Conference. He would hold that position for ten years. Upon his retirement from the Southern Conference in 1960, words of praise came from media outlets across the country. One of those tributes came from an avid UNC Tar Heel, who broadcast UNC football games on the Tobacco Sports Network…Bill Currie, then the Sports Director of WSOC-TV, Channel 9, in Charlotte once said: “Nobody ever gets over being a Tar Heel. He also said this about Coach Wade:

“The true measure of Wallace Wade’s greatness as a man is not fully reflected in his overwhelming won-lost record on the field, nor in his patriotic devotion to our country in combat during two world wars: rather, it is reflected in the dignity and bearing of the man, which makes him a giant among his peers and successors.”

William Wallace Wade was inducted into the National Football Foundation’s College Football Hall of Fame with the Class of 1955. Twelve years later, in 1967, Duke Stadium was renamed Wallace Wade Stadium in his honor.