A woman of patience and vision. That may be the best general description of Mary Lindsay Thornton, who 100 years ago this fall began a long and extraordinarily productive career with the library at the University of North Carolina. More specifically, it’s also accurate to call her the mother of special collections at UNC and […]

A woman of patience and vision.

That may be the best general description of Mary Lindsay Thornton, who 100 years ago this fall began a long and extraordinarily productive career with the library at the University of North Carolina.

More specifically, it’s also accurate to call her the mother of special collections at UNC and the all-time champion collector and bibliographer of North Caroliniana. Literally thousands of researchers have benefited from Thornton’s hard work, determination, and foresight. 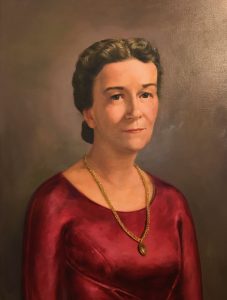 Mary Louise Thornton was born June 12, 1891, in Virginia. Her family moved to Salisbury, NC, where they lived for a few years before moving to Atlanta, where she grew up. Thornton was still a girl when she decided she disliked her given name “Mary Louise.” She swapped the “Louise” for “Lindsay” — the name of her beloved paternal grandmother — and went by Mary Lindsay Thornton for the rest of her life.

Thornton, soft-spoken but hard-working, graduated from the Atlanta Girls High School and the Carnegie Library School, later to become the Emory University Library School. In 1913, with a certificate in librarianship in hand, she took a position at the University of Georgia where she would remain for four years.

The first special collections librarian at UNC
In 1917, UNC’s University Librarian Louis Round Wilson was looking for someone to bring order to a small but growing collection of North Caroliniana. Wilson had been supervising the collection of around 1000 books, 500 pamphlets, and a number of state documents and manuscripts, occupying 50 or so shelves in the library.

The next two decades would see the establishment of the Rare Book Collection and the Southern Historical Collection, whose professional librarians and archivists would join Thornton in developing strong and nationally recognized special collections at Chapel Hill.

A dedication to collecting and bibliography

In 1918, the year following her appointment, Thornton worked closely with Wilson to purchase an unrivaled collection of printed North Caroliniana amassed by Stephen B. Weeks.

Weeks, the first professional historian of the Tar Heel State, had spent thirty-four years gathering a remarkable collection totaling more than 10,000 books, pamphlets, newspapers, and maps. The Weeks Collection provided the depth and breadth that made the North Carolina Collection a resource for in-depth scholarly research on North Carolina. And Thornton’s careful, detail-oriented cataloging provided an entryway into the collection.

At the same time that she was cataloging the Weeks Collection, she began a robust collection development program to acquire both older North Caroliniana and the new materials being published by the state’s authors, businesses, organizations, and institutions. With increased support from John Sprunt Hill, who admired and appreciated her good work, Thornton built the North Carolina Collection to 59,000 items by 1937 and 161,000 by 1954 through a combination of donations and purchases.

In 1934 Thornton began contributing an annual bibliography of newly published North Caroliniana to the North Carolina Historical Review Quarterly. She continued to publish bibliographies over her career, including her widely praised Official Publications of the Colony and State of North Carolina, 1749-1939: A Bibliography, a careful and detailed record of all known North Carolina governmental publications to that date.

The culmination of her bibliographic work was the publication of A Bibliography of North Carolina, 1589-1956, which the university press published in 1958, her final year as curator. The volume compiled 15,519 citations to historically significant books, pamphlets, and periodicals she had cataloged into the North Carolina Collection in her years with the UNC Library. Immensely valuable to anyone interested in the history and literature of North Carolina — scholar and non-scholar alike — the book facilitated and stimulated research for decades to come, and served as a most appropriate capstone to Thornton’s career as the unequaled promoter, collector, cataloger, and bibliographer of North Caroliniana.

Today, more than one hundred librarians, archivists, library assistants, and student employees provide services and resources to the researchers who use the Wilson Special Collections Library. This fall, they pause to remember, admire, and appreciate the remarkable career of Mary Lindsay Thornton — a pioneering career that inaugurated the first century of professional special collections librarianship at UNC-Chapel Hill.

If you find yourself in Wilson Library this week, November 6-10, we invite you to stop by any reading-room desk and take a North Carolina trivia quiz in honor of Ms. Thornton. Turn in your answers for a Mary Louise Thornton button, and join us in celebrating this important library pioneer.