On November 19, 1974, a group of parents took it upon themselves to write Chancellor Ferebee Taylor an ultimatum: “It is the consensus of my husband, myself, and a large number of our friends (including several attorneys), that if action … Continue reading →

On November 19, 1974, a group of parents took it upon themselves to write Chancellor Ferebee Taylor an ultimatum: “It is the consensus of my husband, myself, and a large number of our friends (including several attorneys), that if action is not taken to stop this illegal activity on state-owned property that we may bring suit against the university…”

The source of the writer’s ire is an organization known as the High Noon Society. The purpose of the club, as reported by its 227 members in the October 25, 1974 issue of The Daily Tar Heel, was to gather at the Bell Tower or Forest Theatre and “take it easy.” Students would form a crowd and just get to know each other, relaxing and taking a moment to unwind from the stress of academics. So why did the club attract so much attention from concerned parents?

Mostly it was because of the marijuana.

The Daily Tar Heel reported that the club was a group that “smoke[s] pot and socializes on Fridays at noon,” and they certainly weren’t wrong. (DTH, 1/10/1975) “To imply that there is no marijuana smoked would be less than candid,” admitted even a letter defending the club. (DTH, 10/25/1974) High Noon quickly became famous as High Noon, and the publicity caused it to blossom from a dozen members at its formation to a large gathering approaching 300 members. 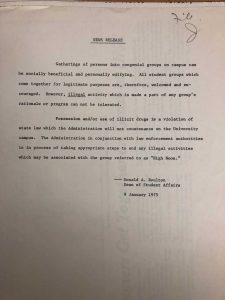 By early January 1975, press coverage and public interest had pushed UNC’s administration into action. A mysterious plan was announced to “halt the marijuana use of the High Noon group,” but its members were unphased. The club met that Friday and smoked pot anyway, and the university put its plan into action. Several photographers were placed atop Wilson Library to photograph around 50 of the Nooners entering the Bell Tower lawn. The Daily Tar Heel reported that an assistant dean of student life admitted that surveillance was part of the plan to end the smoking. (DTH, 1/10/1975)

At the same time photographers were spying on them, leaders of High Noon held a conference with 30 members about alternatives to smoking pot. A High Noon with beer or liquor rather than weed was an idea tossed around for a while. The group then remembered that public consumption of alcohol is also against North Carolina law. Around half the Nooners smoked pot after the photographers left, blazing it even in the face of adversity. (DTH, 1/13/1975)

Several Chapel Hill lawyers declared that the photos would have no value in court, mostly because it was impossible to tell whether the club was smoking tobacco or weed. One lawyer went so far as to call photographing High Noon “the most incredible, mind-boggling invasion of civil liberties [he’s] seen in a long time.” (DTH, 1/17/1975)

The Chapel Hill town council later met with the police to discuss the photos. It’s unclear how the meeting ended, but the High Noon Society disbanded shortly thereafter, ending its short (but dramatic) life. It’s not easy being green.

Various articles from The Daily Tar Heel cited above.