On April 22, 1977, Brooksie Harrington wrote a letter to The Daily Tar Heel about an event that occurred as he hurried past Avery dorm three days prior. As I passed, I was bombarded with racial slurs and obscenities. Now … Continue reading →

On April 22, 1977, Brooksie Harrington wrote a letter to The Daily Tar Heel about an event that occurred as he hurried past Avery dorm three days prior.

As I passed, I was bombarded with racial slurs and obscenities. Now if I had been as utterly stupid as the person shouting, I would have gladly sought him out and beat him senseless. But the coward shouted from one of the upper floors. Not only that but I was drenched with water, as some of the guys threw water from the upper windows. (DTH 4/22/1977)

As it turned out, Brooksie wasn’t the only victim. Around midnight, a large group of black students fell victim to the assault after attending a Campus Governing Council meeting where they demanded increased student government funding. According to Black Ink, the official publication of the Black Student Movement, three groups of BSM members were pelted with “water bags and obscenities” (Black Ink 9/9/77). The organization sought to prosecute several residents of Avery with little success, insisting that the incident was racially motivated. 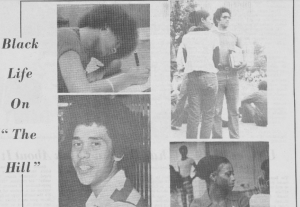 A 1977 collage of UNC African American students in an issue of Black Ink.

BSM Vice-Chairperson Phyllis Pickett didn’t buy that the event was a prank, asking, “[h]ow many people pass by [Avery] at 12:00, coming from the library or whatever? Definitely not enough to hit with such a large quantity of water” (Black Ink 9/9/1977).

An investigation was carried out by Lt. David Williams of the University Police, who filed a comprehensive report containing accusations by fifteen black students. The Student Attorney General at the time, Elton Floyd, decided not to prosecute the water balloon throwers because there was a “lack of sufficient evidence” (DTH 10/17/1977). Despite having insufficient evidence, Floyd held a report by the University Police for 6 months, a report containing signed confessions of involvement by seven of Avery’s residents. Each confessed to different degrees of involvement, but all insisted that the prank wasn’t a purposefully racist attack.

In his written deposition for the police, which was quoted in Black Ink, Avery resident Scott Young said “The Blacks totally blew this thing out of proportion and just wanted some added attention. Because of the Blacks’ falseness etc. of the facts concerning this incident, my opinion of the Black is considerably lower.” (Black Ink, 9/7/1977)

Another Avery resident, David Osnoe, said in his deposition, “There is no need for a BSM (Black Student Movement) because it is a separate, distinct, racist organization. It should be changed to be called ASM (All Students Movement) to promote brotherhood and friendship between all races here at the University” (Black Ink 9/9/1977). In 1977, fewer than 7% of students were African American.

Lt. Williams agreed with the Avery residents in his summary of the case: “The Avery Incident appears to have been a prank that later turned racial, rather than being racially motivated from the beginning.”  The confessions by the residents of Avery were inadmissible in Honor Court because the University Police told residents that statements wouldn’t be used against them for prosecution (DTH, 10/17/1977).

BSM chairperson Byron Horton said that he didn’t consider the Avery incident a closed case and that he would continue to push for the prosecution of those responsible “to eliminate recurrence of such incidents” (DTH 10/21/77). Despite Horton’s protests, Floyd only reiterated that the case was closed (DTH 10/26/77).

1913 The details of Standard Oil Trust executive and Florida developer Henry M. Flagler's will were made public. Using portions of Flagler's estate, his widow, Mary Kenan Flagler (later Bingham), would eventually leave a substantial endowment to the University, the Kenan Professorship Fund.
1932 At a meeting called by longtime university librarian Louis Round Wilson, the Friends of the Library of the University of North Carolina was founded.
1958 The University held a groundbreaking ceremony for the new School of Pharmacy building (now known as Beard Hall).