This is the third and final entry summarizing Hugh Morton’s drive to Washington D.C. with Smith Barrier to photograph the Jesse Helms, the ACC Tournament, and David Brinkley.  The series was to be four parts long, but the collection materials … Continue reading →

SLIM PICKINGS: Hugh Morton’s only black-and-white negatives from the 1987 ACC Tournament semifinals. The lower left images are likely from Dean Smith’s press conference after the Virginia game, because the next frame is a shot from the Wake Forest vs. North Carolina State game. The strip on the right contains more action from that game.

This is the third and final entry summarizing Hugh Morton’s drive to Washington D.C. with Smith Barrier to photograph the Jesse Helms, the ACC Tournament, and David Brinkley.  The series was to be four parts long, but the collection materials just didn’t rise to the occasion.  What happened?

SLIMMER PICKINGS: The only extant black-and-white negatives from the 1987 ACC Tournament final won by North Carolina State over UNC, 68–67.

Morton, as you might expect, photographed the semifinals played between UNC and Virginia, and NC State and Wake Forest.  As noted in the previous post in the series, the images from this ACC tournament are a bit scattered in the collection. Negatives and slides from March 7 are very scarce and can be found here in the collection:

Penciled into his calendar was a dinner with “Babb, Cookery, Thigpen, Sachs” suggesting that the dinner gathering was planned after the initial entry of ACC in ink.  I searched the collection finding aid and online images and found nothing.  Does anyone know who these people were? With some more details we might be able to figure out if images exist under a topical description. 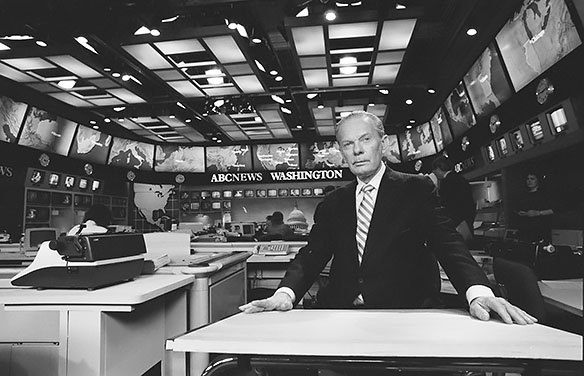 Sunday morning at 9:30, Hugh Morton photographed fellow Wilmington native David Brinkley on the set of ABC News Washington.  Photographically speaking it was the highlight of his day.  That afternoon, UNC lost to NC State 68–67, and Morton’s 35mm slides were once again mostly underexposed.  The day’s end? “Drive Gbo.”  Unlike today’s digital days when you can instantaneously review of your exposures on the back of your camera, Morton would’t know until after he sent off his film to be chemically processed in a lab and reviewed the results on his light table that he had underexposed his ACC tournament color slides.

UNC doesn’t always win basketball tournaments, and even Hugh Morton had a bad couple days court-side.  Fortunately for us today, his trip to DC produced excellent results with several photographs of two of North Carolina’s most notable people of their time.