Chancellor Paul Hardin was a visionary leader who is remembered in North Carolina and across our nation for his dedication to promoting the life-changing impact and benefits of higher education — UNC Chancellor Carol L. Folt, July 2017 One year … Continue reading →

One year ago today, July 1, 2017, UNC lost a giant: Chancellor Emeritus Paul Hardin III.  Hardin led the University of North Carolina at Chapel Hill during its bicentennial observance, died at his Chapel Hill home after a courageous battle with ALS, commonly referred to as Lou Gehrig’s disease.  He was 86 years old.  On this first anniversary of his death, Morton collection volunteer Jack Hilliard looks back at Chancellor Hardin’s time at UNC and his magnificent bicentennial leadership. 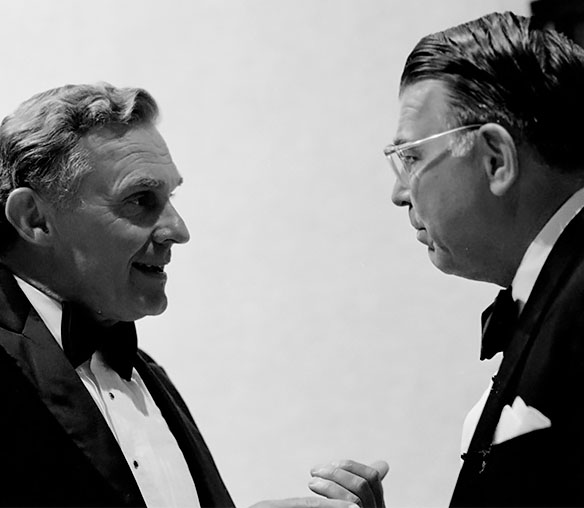 A Phi Beta Kappa from Duke University, Class of 1952, Paul Hardin led three schools—Wofford College, Southern Methodist University, and Drew University—before becoming UNC’s seventh chancellor on July 1, 1988.  He was officially installed on October 12 during a University Day installation ceremony, where Hardin told those gathered: “The future belongs to those institutions and persons who command it, not to those who wait passively for it to happen.”

At UNC, Hardin established the Employee Forum, which gave non-academic university employees a greater voice.  He was an advocate for UNC-Chapel Hill and campaigned successfully for greater fiscal and management flexibility for the state’s public universities. He aggressively led UNC through some of its most important events. When he stepped down in 1995, Carolina was ready for its third century.

One of those important events was Carolina’s bicentennial observance.  On October 11, 1991, he officially launched the largest fund-raising effort in University history—the Bicentennial Campaign for Carolina.

“To command the future this university must compete successfully in the complex and highly competitive world of public higher education,” said Hardin as he announced that $55 million in gifts and pledges had already been raised.  The bell in South Building rang out to mark the announcement.

It was October 12, 1793 when the University North Carolina laid the cornerstone for its first building, now named Old East.  During the next two centuries, the university went from that single building to one of the nation’s most prestigious public universities.  And on October 12, 1993 UNC celebrated that growth in a very special way under Hardin’s leadership.

Bicentennial planning had begun on August 28, 1985 when then Chancellor Chris Fordham sent Richard Cole, dean of the UNC School of Journalism and Mass Communications, a note asking him to chair an “ad hoc committee to assist in planning the forthcoming Bicentennial.”  During the next eight years, plans were carefully put into place for the observance.  Chancellor Hardin looked upon Carolina’s 200th birthday as an opportunity to “light the way” for Carolina’s future. “Dare to think big and to dream,” he told the numerous planning committees.  They did. 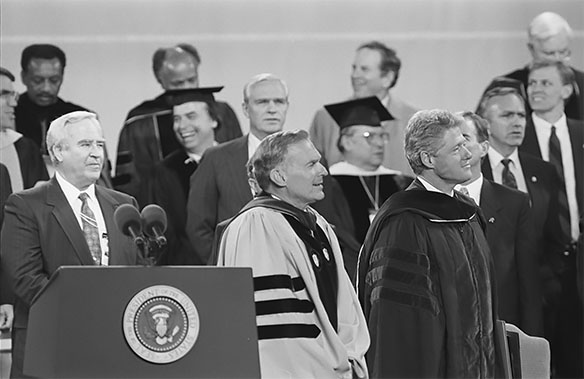 A predawn rain fell on the UNC campus on October 12, 1993, the actual 200th birthday of the university, but that didn’t deter any of the planned celebration.  As a crowd of 3,000 filed into McCorkle Place for a 10:00 a.m. rededication ceremony of Old East, the sun came out.  UNC President C.D. Spangler then stepped to podium.

“I want to thank publicly Chancellor Paul Hardin for the excellent leadership he is giving our university.  I feel quite certain that with such strong leadership now and in the future, 200 years from now in 2193 there will be an assemblage of people at this same location again celebrating this wonderful university.”

Following the Distinguished Alumni Awards presentations, President Spangler again came forward—this time to make an unexpected announcement.  Holding up a gold pocket watch that had belonged to William Richardson Davie, the university’s founding father, Spangler explained: “Emily Davie Kornfield in her will . . . bequeathed to the University of North Carolina the watch . . . having the letter ‘D’ inscribed on its back. . . Chancellor, I take great pleasure in presenting William Richardson Davie’s watch to you for perpetual care by the University of North Carolina.”  Chancellor Hardin accepted the timepiece that is now a part of the North Carolina Collection at Wilson Library.

The University Day celebration continued with the planting of Davie Popular III from a seed of the original tree.  Also, 104 two-foot saplings from the original tree were distributed to sixth-graders representing North Carolina’s 100 counties and the Cherokee Indian Reservation.  UNC Head Basketball Coach Dean Smith handed out the twigs from a flat-bed truck.  The young students took the twigs back to each county for planting.

The University Day Bicentennial Observance culminated with a celebration in Kenan Memorial Stadium, with Chancellor Hardin leading the proceedings.  And just as he was thirty-two years before when President John F. Kennedy spoke on University Day 1961, photographer Hugh Morton was there to document the proceedings.

Then Hardin closed the evening’s proceedings: “Tonight we have rubbed shoulders with history, and we stand with you—Mr. President—facing a future that baffles prediction but whose promise surely exceeds our wildest imaginings.  We are profoundly grateful for your message of hope and promise and humbled to share even part of your day alongside matters of vast global consequence. . . May we set as our goal that our nation’s first state university may also be its best.”

Twelve years after Hardin stepped down from his post as Chancellor, in March of 2007, he and his wife, Barbara, joined with then-Chancellor James Moeser and Chancellor Emeritus William Aycock and former Interim Chancellor Bill McCoy for the dedication on south campus of Hardin Hall, a newly built residence hall named in his honor.

Also on hand that day was Dick Richardson, a retired provost and political science professor who chaired the bicentennial observance while Hardin was chancellor.  Richardson said of his former boss, “There is no veneer to him. No pretense, no façade of personality to hide the real person. . . . If you scratch deeply beneath the surface of Paul Hardin, you will find exactly what you find on the surface, for this man is solid oak from top to bottom.”

A memorial service was held on Saturday afternoon, July 8, 2017 at University United Methodist Church in Chapel Hill; and on that day the university rang the bell in South Building seven times, to honor Paul Hardin’s role in UNC history as the seventh chancellor. The ringing of the bell is used to mark only the most significant university occasions.