Last month, on August 11, 2018, former UNC head football coach Mack Brown revisited Chapel Hill and Kenan Stadium, where he had roamed the sidelines for ten seasons from 1988 through the 1997.  The occasion for Brown’s recent return was … Continue reading → 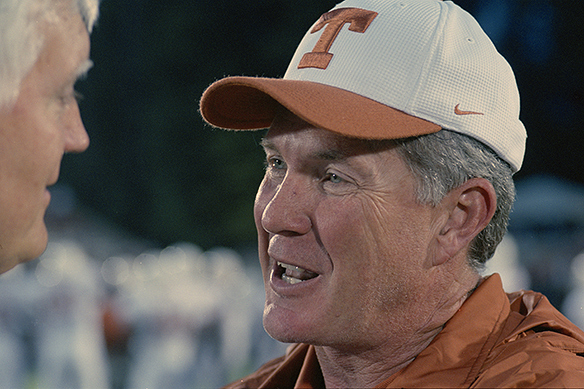 Last month, on August 11, 2018, former UNC head football coach Mack Brown revisited Chapel Hill and Kenan Stadium, where he had roamed the sidelines for ten seasons from 1988 through the 1997.  The occasion for Brown’s recent return was a celebratory dinner with about fifty Tar Heels from his UNC days, held in the stadium’s Blue Zone, in honor of his selection into the College Football Hall of Fame.  The hall announced its 2018 College Football Hall of Fame Class announced back in January, and will hold its induction ceremony on December 4 in New York City.

Brown’s August visit was not first time back to Chapel Hill after his final UNC football season. Morton Collection volunteer Jack Hilliard looks back to September 14, 2002—a visit by Brown that many Tar Heel fans still recall.

The headline in the Saturday, September 14, 2002 edition of the Greensboro News & Record read “Tar Heels hope to catch Texas off guard again.”  Sports writer Larry Keech recounted the famous Carolina–Texas game from 1948 when the Tar Heels beat the Longhorns 34 to 7.  Keech interviewed Tar Heel All-America Art Weiner and he recalled that day in September of 1948 when he and teammate Charlie Justice made UNC history.  Keech closed his story by saying, “If history is to repeat, it will be up to UNC quarterback Darian Durant and receiver Sam Aiken to do their best Justice and Weiner impersonations.”

When Texas head coach Mack Brown and his nationally ranked #3 Texas Longhorns took the field shortly before 8:00 p.m. on Saturday, September 14, 2002, a few boos were heard from the Tar Heel faithful in the Kenan crowd of 60,500—the second largest in Kenan to date. I remember my disappointment at those boos.  I chose to believe they were directed at a Tar Heel opponent, not at Coach Brown.  It was estimated that there were 5,000 Texas fans in the sold-out crowd. 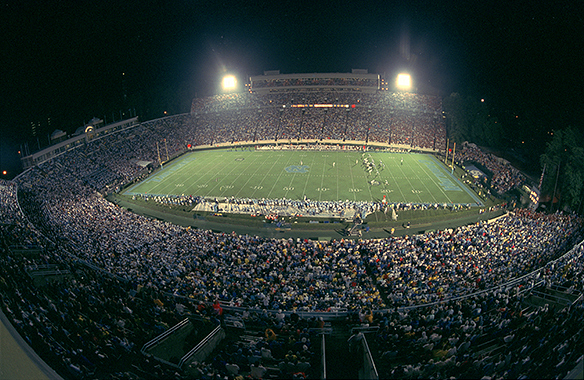 Kenan Stadium during the the second quarter, the scoreboard showing Texas with a 17-to-0 lead over UNC.

By the end of the first quarter, and trailing 10 to 0, the chances of that “repeat-history” seemed to be getting farther away.  Carolina finally scored in the second quarter but trailed 24 to 7 at the half.  That “repeat-history” was now . . . history.  There was just too much Texas.  Each team scored in the third quarter, but Texas poured it on with 21 points in the fourth.  The final score was 52 to 21, Texas.

Following the win, Coach Brown hugged his players and looked toward those Texas fans as he held up the famous “Hook ‘em Horns” sign. The Texas band then played “The Eyes of Texas.”  The Tar Heel hype for this game by now was forgotten. Texas was ranked #3 for a reason.  They were that good.

Following the Mack Brown–John Bunting handshake at midfield, Coach Brown walked into the atrium of the old Kenan Field House at Kenan Stadium, a room in which he was totally familiar. He was set to address the media.

“I’ve never seen a team play that hard down 31 to 14.  The crowd was in it, it was an unbelievable atmosphere.  For myself, I’m really proud that North Carolina football is in John Bunting’s hands and moving forward.

“I was impressed with the crowd. I’m proud to be a part of the two biggest in school history. I’m just on the wrong side in one of them . . . .  There was way too much talk about me coming back here. . . . We had our struggles and I’m proud of what we did here.”

Mack Brown’s position in Tar Heel history is secure with ACC Coach of the Year honors in 1996, three ten-win-seasons, and a number four national ranking (Coaches’ Poll) for the 11-1 1997 team.

Brown would go on to lead the Longhorns for eleven more seasons, winning the National Championship in 2005.  You can see why he will be inducted into the College Football Hall of Fame in December.

During his most recent campus visit, Coach Brown talked with the 2018 Tar Heel football team and told them it is a “privilege” to play in a historic and winsome venue like Kenen Memorial Stadium.  He then added that he was pulling for them each Saturday from his ESPN studio vantage point where he is a network analyst each weekend during football season.