The controversy between isolationists and interventionists became an unusually rugged affair with no holds barred on either side. . . . The name-calling, mud-slinging, and smearing on both sides made the foreign policy debate a poor place for the sensitive … Continue reading →

The controversy between isolationists and interventionists became an unusually rugged affair with no holds barred on either side. . . . The name-calling, mud-slinging, and smearing on both sides made the foreign policy debate a poor place for the sensitive or fainthearted.  Each side welcomed almost any chance to discredit the opposition.

It was Armistice Day—Tuesday, 11 November 1941— and United States Senator Gerald P. Nye’s speech at the University of North Carolina, announced to the student body that day—was still a week away.  Despite the frivolity of Sadie Hawkins Day events during the weekend, peace was not on the horizon.  In the opening sentence of his front-page article of The Daily Tar Heel, writer Paul Komisaruk predicted the nature of the upcoming event:

On that same November 11th evening, Vichy France‘s ambassador to the United States, Gaston Henry-Haye, was the International Relations Club (IRC) speaker at Memorial Hall.  Appointed by Chief of State Philippe Pétain in 1940, it was to be Henry-Haye’s “first public proclamation” since his appointment.  The tone on campus had been and continued to be antagonistic.  The DTH editorial column, titled “Carolina’s Free Speech Continues,” asked that

. . . students who are antagonistic to the ambassador and what he stands for, refrain from showing him anything but the strictest courtesy throughout his address and the open forum.  Carolina’s tradition of freedom of expression is too old now to be violated by one night’s rudeness. 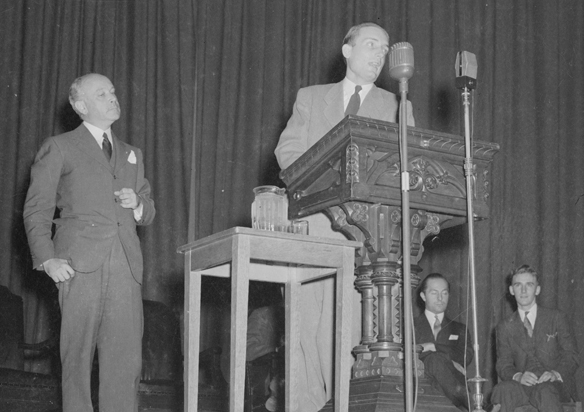 Gaston Henry-Haye, Vichy France’s ambassador to the United States (left) during his appearance at UNC Chapel Hill’s Memorial Hall on Armistice Day, 11 November, 1941. This scene is a severely cropped detail from a previously unidentified negative made by Hugh Morton. The student yearbook, The Yackety Yack, published this photograph cropped even tighter in its 1942 edition. The student at the podium may be Roger Mann, president of the International Relations Club; seated on right may be Kedar Bryan, treasurer.

Two thousand people attended the speech. There were signs of apprehension during the day, but Henry-Haye’s primary talking point was publicizing the need for aid for the French people, a topic he discussed the previous day with President Franklin D. Roosevelt and Secretary of State Cordell Hull.  When asked a confrontational question by a “loquacious” student—”everyone knows the glory of France, but how do you explain Pétain’s alliance with Hitler?”—during an open forum in Graham Memorial after his speech, the audience was “immediately aroused to loud comments and mixed approval and disapproval.” To end the “disorder,” the ambassador took to the microphone and declared, “The answer is too easy.  Your comments are not true.”

The United Press account of Henry-Haye’s speech noted his call for a release of French funds frozen by the United States in order to purchase food and clothing for the French living in regions occupied by Germany who were “threatened to perish from starvation,” and for 1.5 million French prisoners.  Roosevelt, for his part on that Armistice Day, spoke at Arlington Cemetery, alluding to the current war in Europe while reminding his audience of the reasons America entered into the European War in 1917.  Roosevelt quoted the highly decorated World War I soldier Alvin “Sergeant” York: “The thing [people questioning America’s involvement in Word War I] forget is that liberty and freedom and democracy are so very precious that you do not fight to win them once and stop. Liberty and freedom and democracy are prizes awarded only to those peoples who fight to win them and then keep fighting eternally to hold them.” 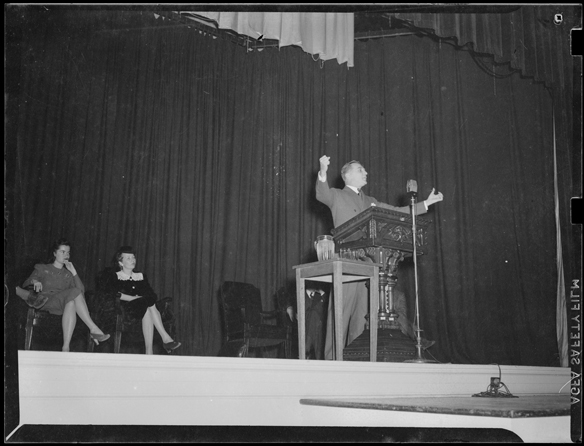 United States Senator Gerald P. Nye speaking at Memorial Hall on 18 November 1941. This is another previously unidentified negative by Hugh Morton. The student on the far left appears to be Helen Miram, member of the Carolina Political Union; the woman to her left remains unidentified.

During the fall semester of 1941, the University of North Carolina’s student-run Carolina Political Union (CPU) had thrice tried to bring Nye to campus, each thwarted by his senatorial duties negating their plans.  Nye’s outspoken isolationist views aroused “constant bitter attacks by both opposing forces” in Washington D. C., leading “observers on the campus to doubt the wisdom of promoting additional ‘hatred spreading material.’”

On November 13, five days before Nye’s visit, a DTH headline noted that “Verbal Onslaughts” had been prepared for Nye by campus organizations, and that opposition to Nye was anticipated to “manifest itself vigorously.”  Several professors and students were unwilling to have the campus serve as a platform for “bigotry and hatred.”  Nye was seen as the “backbone of Congressional opposition to New Deal measures” and as unwilling to “disassociate himself with the ‘fascist elements of the America First committee.’”  On that same day, Congress passed legislation that amended the Neutrality Act, permitting U. S. merchant ships to enter war zones.

Nye had been to UNC once before on March 17, 1937, also as a guest of the CPU.  His talk was titled, “Preparedness for Peace.”  The Daily Tar Heel characterized Nye as a “progressive Republican.”  He was an advocate for American neutrality in the burgeoning European War, “to guide us and to make it less easy to be drawn into other people’s wars as has been the case in the past.”  Among his points, Nye referred to an amendment then under consideration that “says that when the question of participation in a foreign war arises in this country, the question shall be decided by the people in a duly qualified referendum.”  Nye was referring to an amendment to the Neutrality Act of 1935, which evolved during hearings of the Special Committee on Investigation of the Munitions Industry” which he chaired and became known as the “Nye Committee.”  President Roosevelt led an effort to amend the act, passing The Neutrality Act of 1939 in November that repealed the previous law.  Roosevelt and others continued to chip away at the act for the next two years. 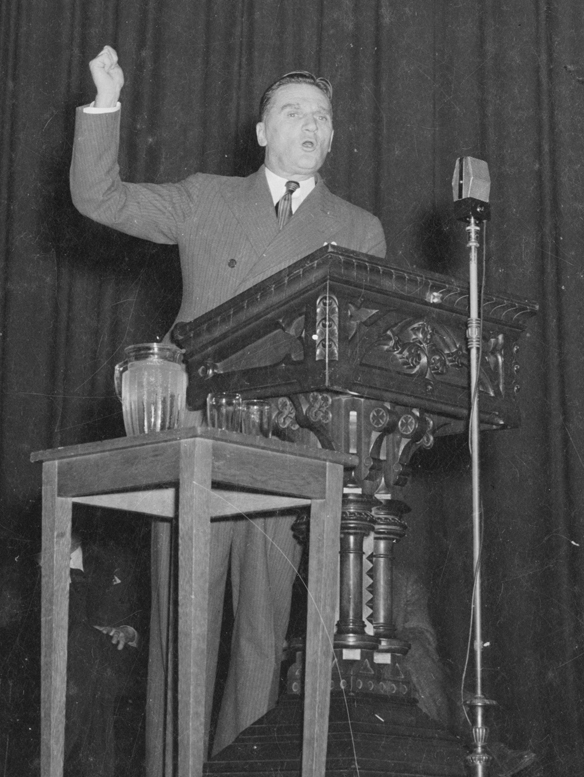 Nye’s November 1941 trip to Chapel Hill was one of many he undertook throughout the country sponsored by the America First Committee, a movement to counter the efforts to repeal the Neutrality Act.  The America First Committee formed during September 1940, growing out of a student group formed at Yale University.  It formally announced its existence on September 4, comprised mostly of midwestern business and political leaders, with headquarters in Chicago.  Its financial support came mostly from the conservative wing of noninterventionists.  America First Committee’s tenets were:

Nye’s involvement The America First Committee took the form of speeches, ramping up his activity during the summer and autumn of 1941.  Nye and the committee’s efforts, however, could not hold sway.  On October 9, Roosevelt once again urged Congress to repeal the Neutrality Act.  On October 29th, Nye delivered a major address on the Senate floor against the president’s call. Two days later the Germans torpedoed the American destroyer USS Reuben James.  It was the first loss of an American military ship.  As a result, on November 13 the United States House of Representatives narrowly approved, by a 212-194 vote, a revision to the Neutrality Act of 1939.  That same day, The Daily Tar Heel wrote again about Nye’s upcoming visit to campus.  An article in The Statesville Daily Record on November 14 also announced Nye’s appearance in Memorial Hall, in which the head of the Carolina Political Union, Ridley Whitaker, said the CPU invited Nye “because regardless of how we may feel about his views, we must recognize the fact that he definitely represents a viewpoint.”

American political milestones and European military events continued to unfold.  Roosevelt signed the repeal legislation on November 17, the day before Nye’s speech in Chapel Hill.  Nonetheless, as The Daily Tar Heel headline had predicted, Nye faced a jam-packed auditorium with an audience that listened to “the fiery Dakotan on tenterhooks.” After Nye concluded, attendees released “alternating waves of boos, cheers, and hisses.”  The following morning, The Daily Tar Heel headlines read, “Stormy Verbal Onslaught” and “Spontaneous Outbursts Threaten Real Disorder.”  During his speech, the senator “vigorously maintained that ‘propaganda of the most criminal order has been practiced and lack of frankness by American leaders and downright deception have brought the United States to the brink of war.”  After his uninterrupted speech, audience members “flung questions at the rostrum in quick, violent succession.”

1845 President David Lowry Swain recommended that "a program embracing a Law Professorship with the Hon. William Horn Battle at its head" be established. The Board of Trustees agreed and approved Battle as the first professor of law. The Board also bestowed an honorary master of arts degree on Battle.
1900 Thomas Clayton Wolfe, best known for his novel "Look Homeward, Angel," was born in Asheville. Wolfe graduated from the University in 1920.
2005 Erskine Bowles, UNC Class of 1967, was unanimously elected by the Board of Governors to be the president of the University of North Carolina System.