Prolog: Ten days after future UNC football legend Charlie Justice led his undefeated Bainbridge Naval Training Station football team to a 46-to-0 win over the University of Maryland, he went on a well-deserved leave. At the same time, Sarah Alice … Continue reading →

Ten days after future UNC football legend Charlie Justice led his undefeated Bainbridge Naval Training Station football team to a 46-to-0 win over the University of Maryland, he went on a well-deserved leave. At the same time, Sarah Alice Hunter took a brief leave from her job at the Naval Observatory in Washington, D. C.  The two headed back home to Asheville, North Carolina where they were married at Trinity Episcopal Church.

During the next 59 years, 10 months, and 23 days, Charlie Justice would be interviewed numerous times.  During most of those interviews, he would, at some point, say “the best thing I ever did was to ask Sarah to marry me.”

They played the 80th meeting between Carolina and Duke on November 26, 1993—a chilly, gray Friday morning—at 11 o’clock.  My guess is that ABC-TV wanted it played on that day at that time.  As it turned out, that was a good thing because the game ended about 2:30 PM, in plenty of time for a very special celebration in “the living room of the University” across campus.

Today, on the day Charlie and Sarah Justice would have celebrated their 75th wedding anniversary, Morton collection volunteer Jack Hilliard looks back 25 years at their 50th celebration.

A few minutes after Carolina beat Duke 38 to 24 in the 1993 edition of their annual in-state rivalry, (thanks to freshman running back Leon Johnson’s 142-yard-and-4-touchdown day), many of us headed across campus to the historic Carolina Inn, where family and friends of the special couple were gathering.  Although Charlie and Sarah Justice’s fiftieth wedding anniversary was actually on November 23rd, game day on the 26th seemed like a good time to celebrate the storybook event of November 23rd, 1943.

In addition to celebrating the Justice’s fiftieth anniversary, the event also honored the memory of their son Charles Ronald (Ronnie), who had passed away on Friday, June 11, 1993 at their home in Flat Rock, North Carolina.

This is how the Justice’s chose to invite their guests: 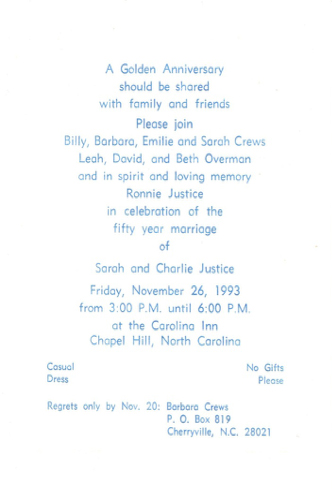 There were family members, teammates, friends, and fans in attendance.

The Carolina Inn ballroom provided the perfect backdrop for the elegant event and the many guests surrounded a large buffet table with roast beef, salmon, fruits, and cheeses. The centerpiece was a large ice sculpture depicting a locomotive celebrating Charlie’s football career when he was called “Choo Choo.” 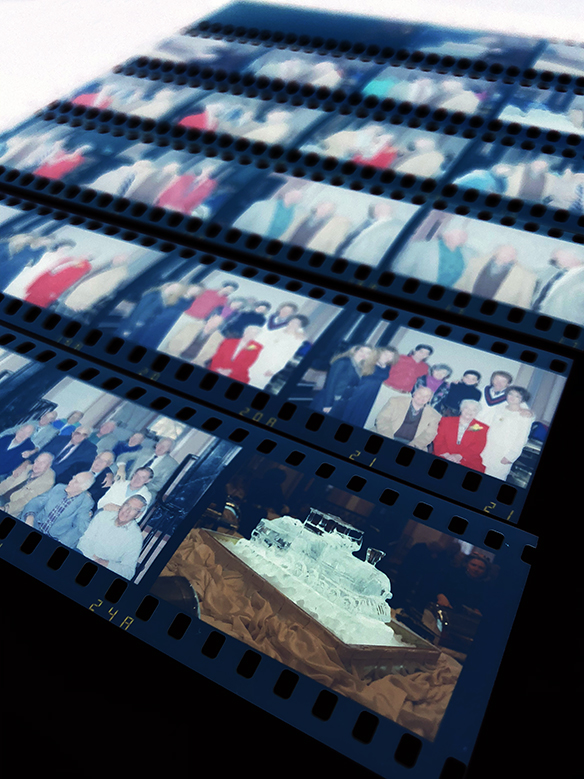 A view of Hugh Morton’s negatives placed on a light box, inverted so they can be seen as positives, that he made during the Sarah and Charlie Justice 50th anniversary celebration. The image in the foreground is an ice sculpture of a “Choo Choo” train.

At the right side of the room was a video player and large screen where highlights of Charlie and Sarah’s fifty years together were shown.  I had the honor of producing that video presentation which was narrated by North Carolina Sports Hall of Fame broadcaster Charlie Harville.

Following a family toast by Barbara (Justice) Crews, Charlie and Sarah’s daughter, head football coach Mack Brown added his congratulations and then offered an additional toast. He then spoke of the importance of Carolina’s football history and heritage.  After Brown concluded his words about Carolina’s Golden Age during the late 1940s, Justice stepped forward and thanked the coach for restoring football respectability “for my University.”

During the entire celebration, photographer Hugh Morton was there documenting every phase of the event: from a group shot of the Justice team mates to a funny shot of Charlie and Sarah holding up special tee shirts prepared for the party, a shot that appeared in the February, 1994 edition of The University Alumni Report newspaper on page 34. 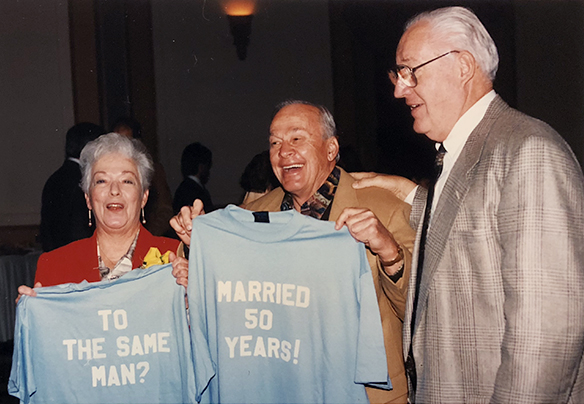 Sarah and Charlie Justice display their “wears” as Charlie’s UNC teammate Art Weiner stands by with a supportive hand.

So, on this day, November 23, 2018, I choose to believe that Charlie and Sarah Justice are once again celebrating their storybook life together on their 75th wedding anniversary. Joining the celebration is son Ronnie, and just as he was 25 years ago, Hugh Morton is there with camera in hand.

1963 Following its hurried push through last days of the General Assembly session, the Speaker Ban Law was enrolled.