The farcical drama Three in the Attic was released on this day in 1968. The film is set at a fictional New England college, but was filmed primarily at and around UNC. The plot centers on one student, Paxton, who begins dating three … Continue reading → 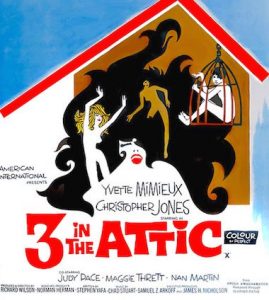 A poster for the 1968 film “Three in the Attic,” which was filmed in part on the UNC Chapel Hill campus.

The farcical drama Three in the Attic was released on this day in 1968. The film is set at a fictional New England college, but was filmed primarily at and around UNC. The plot centers on one student, Paxton, who begins dating three girls at a neighboring school. Things take a turn for the worse when they discover his infidelity. Together they decide to lock him in an attic and torture him with their love.

When producers from American Film International approached UNC about using parts of the UNC campus for their new movie, Chancellor Carlyle Sitterson appointed Professor William Hardy of UNC’s Radio,Television, and Motion Picture Department to the task of reading the script and deciding whether or not the film was appropriate to be filmed at UNC. 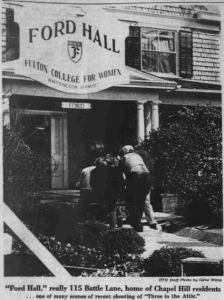 Photograph courtesy of the Daily Tarheel

Hardy approved the script, writing to the chancellor that he only found one scene in particular, to be “considered marginal in taste.” In the same letter, he remarks that he is aware that there were other scenes with “sexual overtones” in the script, but it did not contain “homosexuality, any other perversion, or violence.” With this nod of approval and less than subtle homophobia, the filming commenced.

The film hit some roadblocks in the press, written off as a pornographic film or “skin flick”when a reporter at the Greensboro Daily News was denied entry to the set of the film. A graduate student who was on set that day informed the reporter that he saw nude actors walking by and that half of the crew was being kept out for some of the scenes being filmed that day. The resulting article, claiming they were filming a “skin flick” on UNC’s campus, sparked some debate and controversy. Letters poured into the chancellor and vice chancellor’s offices expressing concern for the integrity of the university. But by this time, the scenes being filmed at UNC were nearly done. As the filming in Chapel Hill came to a close, the director of the film, Richard Wilson, penned a letter apologizing for the “flurry of adverse publicity” the university was receiving, assuring the chancellor that the film was nothing more than a “social satire” and not a “skin flick” as the local news outlets were reporting.

When the film came out, it was revealed that it was not pornographic, but did include scenes with partial nudity and adult themes, Professor Hardy wrote again to Chancellor Sitterson. He apologized for the terrible turn of events claiming the script he read “at the outset of the matter gave promise of something entirely different and certainly better than the final result.”

The negative attention the university received in relation to the film died down shortly after the release. Since the film came out, it has had a less than stellar reputation with one article calling the film “overpriced.” However, you might still want to watch it just to see if you recognize some of your favorite spots on and around campus.

If you watch Three in the Attic you might recognize some of these notable locations on campus and nearby:

Office of Chancellor of the University of North Carolina at Chapel Hill: Joseph Carlyle Sitterson Records, 1966-1972 (#40022)

1792 The University acquired its first book, "The Works of the Right Reverend Father in God Thomas Wilson, Fifty-eight Years Lord Bishop of Sodor and Man: With His Life," which was presented to the Board of Trustees by John Sitgreaves.
1835 The Board of Trustees chose former state representative and governor David Lowry Swain as president.
1938 After delivering an address at Woollen Gymnasium, President Franklin D. Roosevelt received an honorary LL.D. (doctor of laws) from the University.
1962 Folk singer Pete Seeger performed in Memorial Hall. The proceeds of the concert went to the Student Nonviolent Coordinating Committee (SNCC). A small group of students, critical of Seeger's political views and support of SNCC, protested outside.