On March 18th, 2012 Bill Richards, a colleague who worked in the library’s Digital Production Center, passed away unexpectedly while watching the Tar Heel’s basketball team defeat Creighton University in the “Sweet Sixteen” round of the NCAA Men’s Basketball Tournament.  … Continue reading →

On March 18th, 2012 Bill Richards, a colleague who worked in the library’s Digital Production Center, passed away unexpectedly while watching the Tar Heel’s basketball team defeat Creighton University in the “Sweet Sixteen” round of the NCAA Men’s Basketball Tournament.  In 1982, Bill was the Chief Photographer for the Chapel Hill Newspaper.  In 1988, he began working as a photographer and graphic designer in the UNC Office of Sports information.  In 1998 he started working in Library Photographic Services, but continued shooting for Sports Information into the 2000s. I am dedicating this blog post, as I have each year since his departure, to Bill who, like Hugh Morton, was an avid UNC basketball fan.

This year poses a bit of a challenge for this annual blog post: the NCAA Tournament has yet to begin. Where then shall we go to celebrate, Bill?  I know . . . midwest!

Yep. it’s NCAA Men’s Basletball Tournament time.  Were it not for two teeny tiny points, UNC might be heading up the East Regional bracket.  Instead, the Tar Heels find themselves atop a different bracket farther west—the Midwest, to be exact.  Haven’t we been here before?  Yes, and just like this year, Carolina did not win the ACC Tournament played in Charlotte.

In the 1990 NCAA Tournament, the Tar Heels took off for Austin, Texas as the bracket’s eighth seed. First up: ninth seeded Southwest Missouri State University (now known as Missouri State University).  The Tar Heels handily beat the Bears by thirteen points, 83-70.  Next on the docket: number one seed Oklahoma, ranked first in the nation in the final Associated Press Coaches Poll (through March 11) with its 26-4 record.  By comparison, UNC with its 19-11 record was unranked—its worst season in twenty-six years despite defeating the fifteenth-ranked Duke Blue Devils twice during regular season play.

The limited time I have available does not permit me to recount the game’s highlights, but the photographs below tell some of the closing story.  The first frame, Frame 24A, depicts the time out called by Carolina at the 0:39 second mark after Oklahoma’s William Davis converted his “and-one” free throw for a three-point play to take the lead 77-76.  After the break, the Tar Heels struggled to make anything to happen.  Dean Smith tried to get someone’s attention to call a timeout, but before that could happen, an Oklahoma player fouled King Rice with 0:10 on the clock.  A timeout did take place, after which Rice tied the game by making his first “one and one” foul shot.

King’s second shot was off the mark, and the ball rebounded high off the rim.  No one could reel in the rebound before an Oklahoma player knocked the ball out of bounds under the basket.

Dean Smith called for a timeout, during which he drew up a play designed to get the ball in the hands of Rick Fox, the Tar Heel’s three-point marksman with twenty-one points in the game to that point.  Fox recounted after the game what Dean Smith told him during the timeout: “‘Rick, remember, we don’t need three. We only need one.’”

Fox got two, with a quick fake of a three and a drive down the baseline to make the layup with only one second remaining.

Hugh Morton negatives depicting two moments from the close of the UNC versus Oklahoma game at the 1990 NCAA Tournament game. 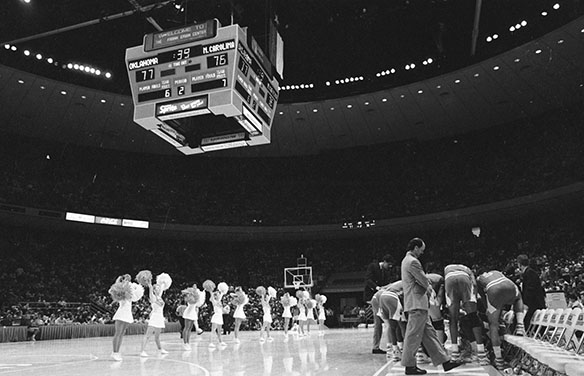 There are no negatives or color slides of the ensuing play, with no missing frames or 35mm color slides.  But when the clock reached 0:00, Morton recorded the final score: UNC 79 Oklahoma 77. 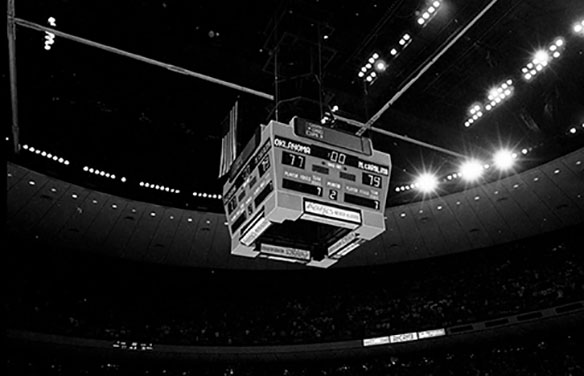 The game clock after UNC’s upset of Oklahoma in the Midwest Regional of the 1990 NCAA Men’s Basketball Tournament. 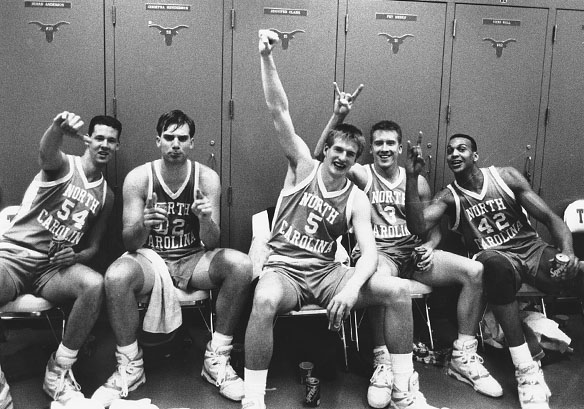 Here’s looking at you, Bill. 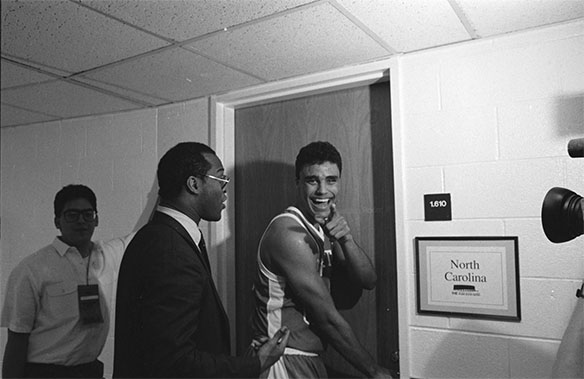 1964 Willie Cooper becomes the first Black basketball player at UNC when he takes the court for the junior varsity team. Cooper, from Elm City, N.C., played one year on the JV team.