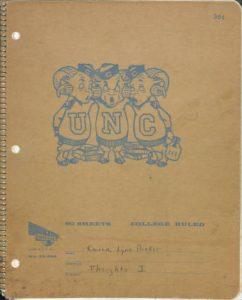 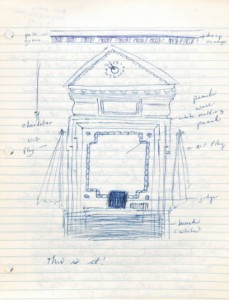 If you read the Daily Tar Heel, you’ve likely read Ian Williams’ iconic column “Why I Hate Duke.” The Daily Tar Heel usually highlights the piece before our first basketball game of the year against Duke. The article is essentially … Continue reading →

If you read the Daily Tar Heel, you’ve likely read Ian Williams’ iconic column “Why I Hate Duke.” The Daily Tar Heel usually highlights the piece before our first basketball game of the year against Duke. The article is essentially the Carolina student’s guide to hating that dark, blue school to the North both on and off the basketball court. In his article, Williams states that he hates Duke with an “infernal passion undying.” Many of us feel that way in light of our recent loss, but just how long has the Carolina community loved to loathe our adversary?

The answer is long before that archenemy was actually named Duke University! 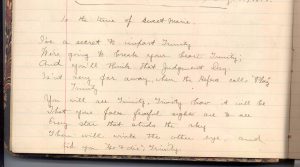 Written to be sung to the tune of “Sweet Marie,” this song can be found in William Starr Myers’s notebook documenting much of his writing during his time at UNC. (Folder 15, Box 2, of the William Starr Myers Papers, #03260, Southern Historical Collection.)

That’s right.  UNC has the distinction of hating Duke before they became a full-fledged university and was simply known as Trinity College.  Let that sink in for a minute.

For the football game against Trinity College on the 24th of October 1894, William Starr Myers (an editor for The Tar Heel, the forerunner of The Daily Tar Heel) wrote several poems to commemorate the day. One of his songs began:

“I’ve a secret to impart Trinity/We’re going to break your heart Trinity;/And you’ll think that Judgment Day,/Is’nt [sic] very far away, when the Referee calls ‘Play’ Trinity./You will see Trinity, Trinity how it will be/That your faces fearful sights are to see/Every star that studs the sky/Then will wink the other eye, and bid you/’Go & die,’ Trinity.” 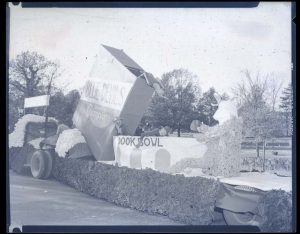 The rivalry with Duke has  a long history, which has taken various forms over the years. For instance, between 1950 and 1965 there was an annual “Beat Dook” Parade held on Franklin Street near the end of November.

As we anxiously await the rematch on March 9, I think it’s safe to say that yes…our Carolina community truly does hate Duke with “an infernal passion undying.” And many of us wouldn’t have it any other way.

We hope that everyone is enjoying the new semester.  Hopefully you’re getting back into the swing of things without too much trouble.  If everything is going well, congratulations!  It turns out that you are much luckier than some of your … Continue reading →

We hope that everyone is enjoying the new semester.  Hopefully you’re getting back into the swing of things without too much trouble.  If everything is going well, congratulations!  It turns out that you are much luckier than some of your predecessors in the winter of 1929 were. 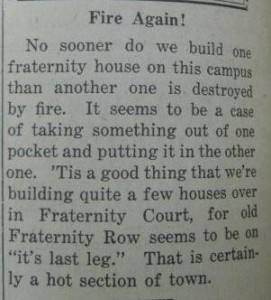 In fact, from the very beginning of the school year, various fraternities on UNC’s campus had some pretty rotten luck.  First, there were growing financial concerns and then the great stock market crash of 1929.  Male students were in the position of not being able to afford being in a fraternity unless they took out a loan.  Despite all of this, though, fraternities accepted a healthy number of bids that fall semester, and luck seemed to be on their side. 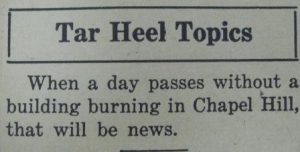 Their luck ran out, however, at the end of the fall semester.  On Thursday, December 12, 1937 (a day before Friday the 13th), the Delta Sigma Phi house of Old Fraternity Row was almost completely destroyed in a fire early that morning.  When the members of the house woke up and realized the house was on fire, they attempted to call the fire department but could not be connected because the fire chief was already having a conversation of his own.  Consequently, several members had to drive down to the station to alert the chief in person.  At the time, the chief said that he heard a car beeping its horn like mad and immediately thought it was a rum runner being chased by the authorities.  By the time the fire was extinguished, most clothes and furniture could be saved, and it was lucky that the nine men sleeping in the house had escaped with their lives. 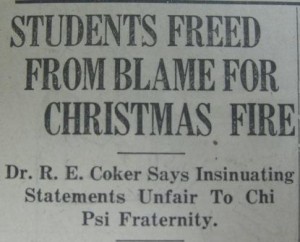 Delta Sigma Phi did not hold the distinction of being the only fraternity house that burned down that year though.  The Daily Tar Heel was beginning to make daily quips about old fraternity row as the “hot section of town.”  The Chi Psi fraternity house also burned down that winter, on Christmas night.  Unfortunately for the members of Chi Psi, they were accused (rather indirectly and hastily) of setting the fire deliberately to collect the insurance money.  The controversy raged until January 8, 1930 when the students were finally freed from blame of the fire.  In fact, Dr. Coker took great umbrage at the suggestion that any student at Carolina would be so devious and squared off with the insurance commissioner until the whole matter was cleared.

So, count yourself lucky.  If you are rushing a fraternity or sorority this semester, we are certainly glad that lady luck seems to have reinstituted herself on our campus!