If you’re looking for someone to help you plan an April Fool’s Day prank, look no further than John B. Stronach, class of 1893. President of the Eating Club (“Record, 31 bananas in 13 ¾ minutes,” according to the 1890 Hellenian), and member of … Continue reading → 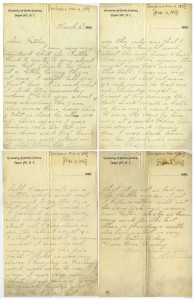 If you’re looking for someone to help you plan an April Fool’s Day prank, look no further than John B. Stronach, class of 1893. President of the Eating Club (“Record, 31 bananas in 13 ¾ minutes,” according to the 1890 Hellenian), and member of both the “Gunning Club” and “Whist Club,” the Raleigh native seems to have had a knack for getting into trouble.

In February, 1890, UNC President Kemp Battle wrote to John Stronach’s father, W.C. Stronach, concerned about the young student’s behavior. His shocked and dismayed father responded immediately to President Battle, enclosing his son’s own version of events (transcribed in full below).

I am very sorry indeed that Dr. Battle had to write to you about me, but think he has it a little larger than it was. I will tell you just how it is and what I did. You remember when I told you about my shooting the gun, ever since then every thing that is done he calls me up. Once again, I was beating on a tin tub in my room and Prof. Cain came in and asked me to stop. Those two times are the only ones that I have been caught and about the only times I have done anything again. The night some boys wrung [sic] the bell,  I was in my room and did not even go out again. He had me up. Thursday night a crowd of boys wrung [sic] the bell and made a ball of fire and went around to scare the boys by turning it around before the windows and crying fire. I was down town in Lee Woodard’s room when they made the ball. I came up in a little while and went around to see the fire but did not touch it. I hollered as everybody else did and this is about all I have done as for the late at night, etc. I don’t know what he means unless it was the bell ringing or the fire ball.

Mike is coming down Thursday or Friday and will come to see you. I am very sorry that I have caused you so much trouble and hope that you will see that it is not as bad as Dr. Battle makes it out. I hope mother will not be very sick and is even now better. Doctor as [sic] been very sick for the last three or four days with his temper but is very much better today.
Give love to every.
Your loveing [sic] son,
Jno. B. Stronach

1920 The University established the University of North Carolina Press. With Dr. Louis Round Wilson as director, the Press officially began operations in 1922 and published its first book, "The Saprolegniaceae, with Notes on Other Water Molds" by Dr. William Chambers Coker, in 1923.
1993 Governor James B. Hunt, Jr., attended the groundbreaking ceremony for the new School of Social Work building, which is now known as the Tate-Turner-Kuralt Building.