In 2013, UARMS published a blog post highlighting the web archiving project of the UNC Libraries. To demonstrate how much the web had changed over time, this post featured UNC’s web page circa 1997. To update the information provided in that … Continue reading →

In 2013, UARMS published a blog post highlighting the web archiving project of the UNC Libraries. To demonstrate how much the web had changed over time, this post featured UNC’s web page circa 1997. To update the information provided in that post, the Internet Archive now boasts 469 billion web pages saved since 1996 compared to the 366 billion pages saved in 2013. UARMS still actively captures and archives websites, which can be accessed through the University Archives’ Archive-It page.We have recently uncovered more documents related to the creation of this early UNC web page. 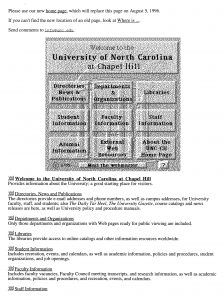 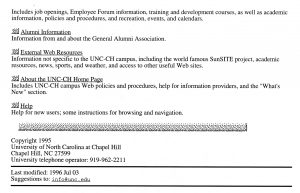 [Black and white print outs of the 1996 UNC homepage prior to being redesigned, from the Academic Technology and Networks of the University of North Carolina at Chapel Hill Records (#40224), University Archives]

In 1996, a group of faculty, staff, and students known as the Web-Walkers set out to redesign UNC’s home page. As highlighted in our 2013 blog post, the most prominent visual featured on the new web page was an acrostic spelling CAROLINA that was used to organize the links to other relevant web pages. 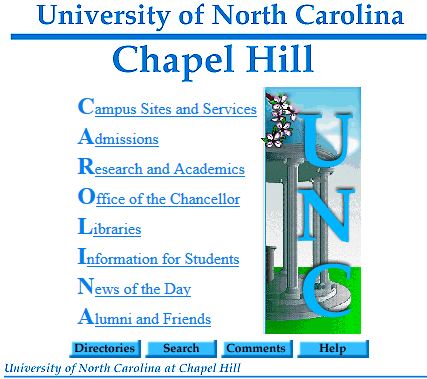 UNC homepage in 1996 as redesigned by the Web-Walkers group, from Archive.org Wayback Machine

This acrostic was divisive among the Web-Walkers, with numerous correspondences both supporting and critiquing its use. One group member wrote in feedback that he would, “strongly suggest dropping the whole spelling-out of CAROLINA with section headings. As an acronym for website subsections, it looks, well, ‘cute,’ but it just doesn’t lend itself to a sensible organization of information.”  This complaint was echoed by  a self-described “Librarian and frequent UNC home page user,” who wrote that “forcing the logical categories of text to fit the word ‘Carolina’ is awfully cute and artificial.”

The redesign also garnered praise, with another group member writing, “the new UNC screen looks really good–very clever use of Carolina, too…I’ll bet that took some brainstorming.” This compliment was not unique, as another message stated, “It was very creative for someone to match CAROLINA with appropriate categories.” The problem with the acrostic became more apparent as users searched for content that had previously been accessible with a single click, such as “Departments and Organizations,” which was now buried several pages deep under the “Research and Academics” link.

The inspiration for the new categories originated with the University of Chicago’s homepage, which the Web-Walkers group used as a model. These categories were agreed upon before the CAROLINA acrostic was created:

When the design team chose to make the first letter big, it didn’t look quite right and they wanted to make it spell something. To get CAROLINA all they had to do was change Academic and Research to Research and Academic, Student Information to Information for Students, and add an O — Office of the Chancellor.

In the same email explaining the origin of the acrostic, the UNC Campus-Wide Information Systems Manager, who oversaw the website redesign, predicted that “this new page won’t last much more than a year.” The webpage would not be redesigned again until 1999, three years later.

Another major issue that arose in designing the new website was the color scheme. While the final version features Carolina Blue text over a white background, there is copious feedback featuring complaints about blue text and black links. As one Web-Walker wrote,

I find the main page color scheme (text in blue, links in black) to be _very_ confusing… a lot of browsers default to black text with blue links, and particularly with the C-A-R-O-L-I-N-A structure here it is not immediately clear whether the user should click on the initial letter or on the rest of the word.

This advice was never taken and the first letter of each category was never made part of the link. A follow-up email by the same person states that after showing the page to friends, “NONE managed to click on the actual links without several false starts.” The use of Carolina Blue as the font color, while rich in school pride, also posed a user interface problem. As one member reported, “the contrast is not very good, and it is difficult to read…I hate to say it, but a royal blue (Duke?) is much easier on the eyes.”

Since the design discussed in this blog post debuted in August of 1996, the UNC homepage has undergone three major redesigns. The most recent redesign was implemented in July of 2010, bringing us the homepage that is now familiar to all Tar Heels. Click on the screenshots below to peruse each iteration of the site in the Internet Archive’s Wayback Machine. 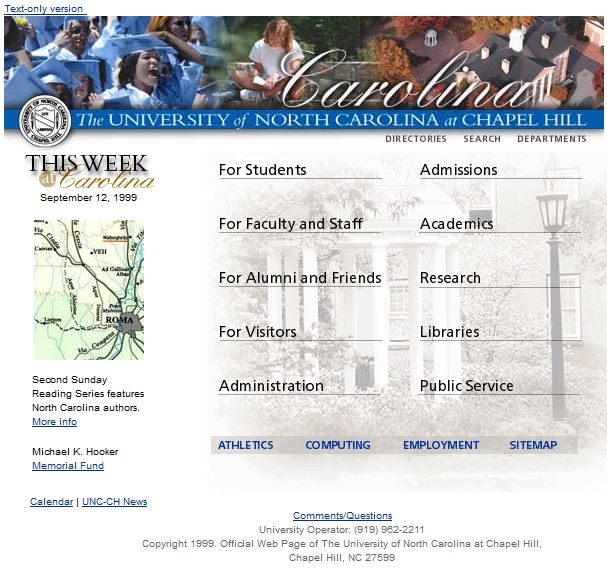 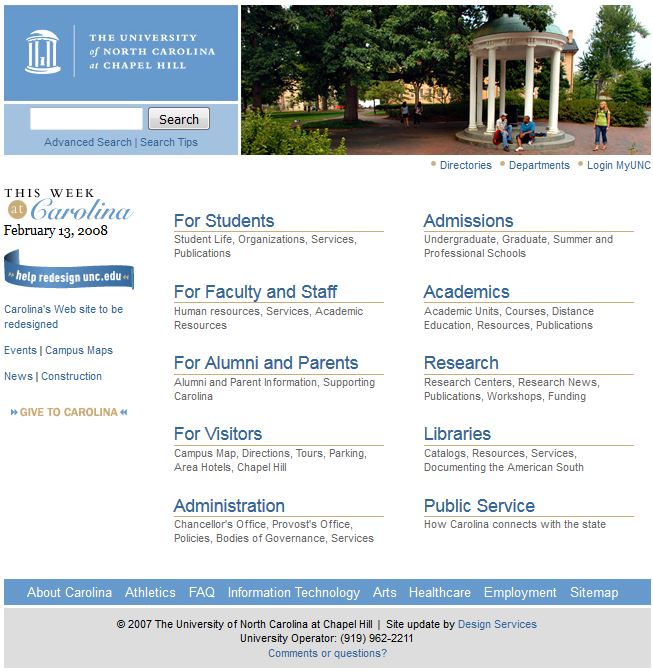 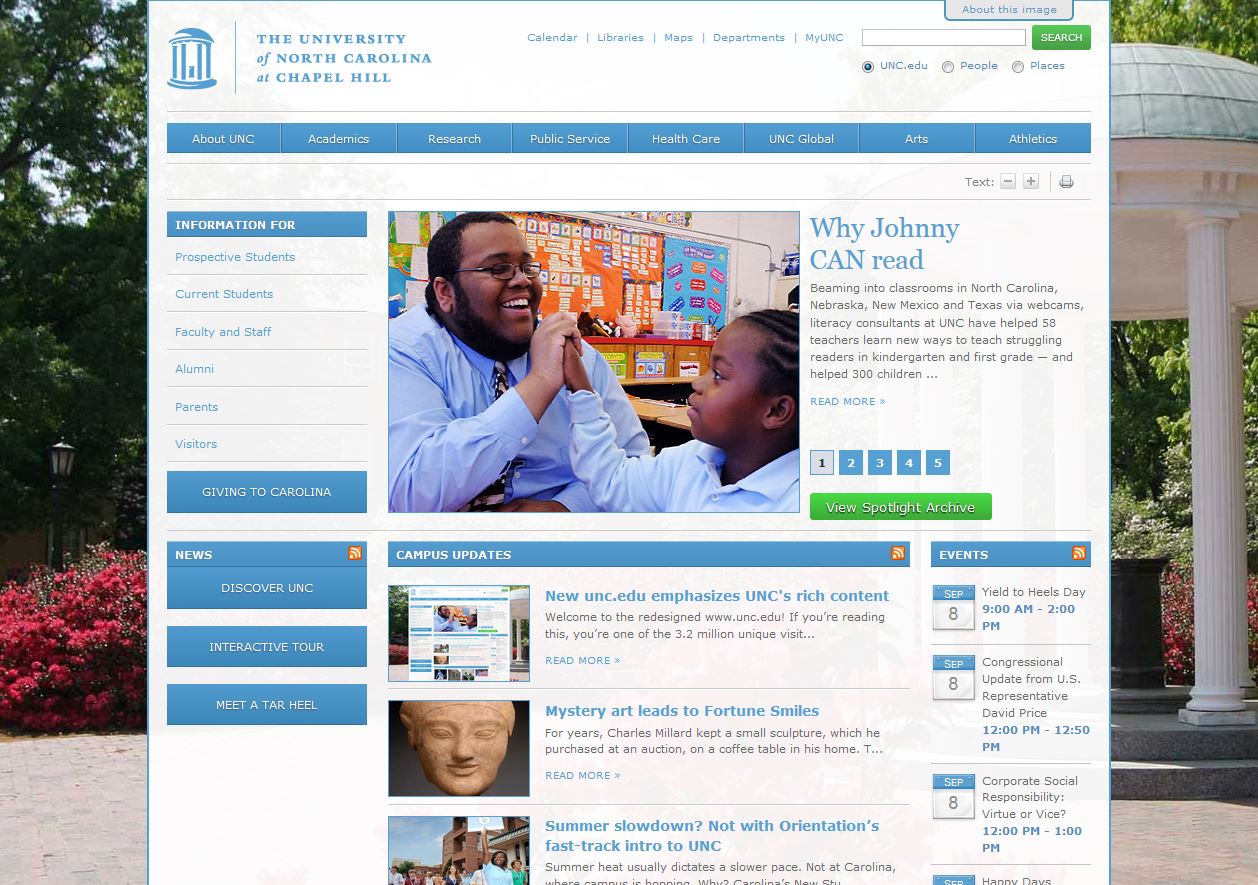