[Each month we feature a “creator” or one of the SHC’s manuscript collections. In archival terms, a creator is defined as an individual, group, or organization that is responsible for a collection’s production, accumulation, or formation.] Guion Griffis Johnson of … Continue reading →

[Each month we feature a “creator” or one of the SHC’s manuscript collections. In archival terms, a creator is defined as an individual, group, or organization that is responsible for a collection’s production, accumulation, or formation.]

Guion Griffis Johnson was born in Wolfe City, Tex. After graduating from Greenville (Tex.) High School, Johnson attended Burleson College for two years, then received her A.B. from Mary Hardin-Baylor College, where she later served as head of the Department of Journalism. Johnson also earned a bachelor’s degree in journalism from the University of Missouri (1923) and a Ph.D. in history and sociology from the University of North Carolina (1927). On 3 September 1923, she married Guy Benton Johnson.

Beginning in 1924, the Johnsons worked at the Institute for Research in Social Science at the University of North Carolina, where Guy also served as professor in the Department of Sociology. For the most part, Johnson spent most of her academic career researching historical and current problems of the poor and disadvantaged. After completing her dissertation, Johnson studied the African American population on St. Helena Island, S.C., as a staff member for the National Research Council Study of the Negroes of St. Helena Island. In 1930, she published her first book, A Social History of the Sea Islands of South Carolina and Georgia, which was based on this research. Her later research on North Carolina history resulted in Antebellum North Carolina: A Social History in 1937. During 1939-1940, Johnson participated in the Carnegie-Myrdal Study of the Negro in America.

During World War II, Johnson took an active role in the civic life of Chapel Hill. As a volunteer, she was head of the Community Service Committee of the Chapel Hill Rationing Board, information executive for the Chapel Hill Office of Civilian Defense, and collector of war records for Orange County, N.C. 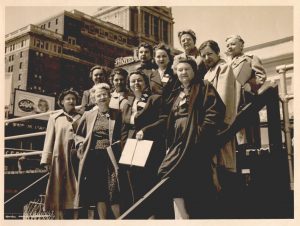 The Johnsons were frequent visitors to Africa, touring and working in Liberia, Nigeria, Zaire, Morocco, and South Africa, where Johnson lectured at Rhodes University in 1960. Johnson’s trips to Africa permitted her to continue her academic research and promote her educational goals, and also be involved in Christian missionary work. Her missionary work also took her to Japan, Hong Kong, Thailand, Saudi Arabia and Pakistan.

Johnson published her third book, Volunteers in Community Service, funded by the North Carolina Fund, in 1967. She also collaborated with Guy on a history of the Institute for Research on the Social Sciences (1980).

Johnson was progressive politically, acting as a strong proponent of school desegregation, social welfare programs, and women’s equality. She was also an advocate of greater concern for and involvement in world affairs and supported the effort to build a strong United Nations.

In her later years, Johnson continued to serve on advisory boards and gave many lectures in North Carolina. She was also honored with many lifetime achievement awards, including the University of North Carolina’s Distinguished Alumnus Award and the Chi Omega Distinguished Service Award for Women. Johnson died at her home in Chapel Hill on 12 June 1989.

The Southern Historical Collection is proud to serve as the repository for the personal and professional papers of Guion Griffis Johnson. The Johnson collection contains over 32,000 items ranging in dates from 1873 to 1987. Materials in the collection include correspondence, writings, subject files, and other materials relating to Johnson’s professional and family life.

View the finding aid to see a complete list of the contents of the Guion Griffis Johnson Papers in the SHC.