Was there such a thing as student activism in the 19th century? If so, what form did this activism take? An article in the Daily Tar Heel, published December 5, 1967, asserts that one of UNC’s most famous alums, United States President James Knox Polk, led a “rebellion” in 1816 among the students that culminated with the resignation of the University’s president at the time, Robert Hett Chapman. The title states, “U.S. President Was Campus Activist.”

What is true is that an actual student uprising against the faculty did take place, and it not only led to the ousting of Chapman, but also to the expulsion of the leader of said rebellion. What is false is that Polk led it, although he may very well have been present and subsequently inspired by the cause. This September 1816 event has been written about in numerous histories, however the misleading newspaper headline regarding Polk’s role requires clarification of who did what, but more importantly, presents an opportunity to revisit what was a fascinating chain of events at UNC-Chapel Hill.

Although Polk was on campus at that time, having enrolled as a sophomore in spring 1816, the “leader” of the September 18, 1816 “uprising” was actually a student by the name of William Biddle Shepard. As Battle states in his history of the university, he gave a speech without approval, and the next day he was suspended for 6 months. Shepard, the future congressman, eventually left to attend the University of Pennsylvania. Others, not including Polk, were also suspended due to their support of Shepard’s defiance. News of the controversy spread quickly across the state, requiring the University to make a public statement justifying their response.

The oration expressed popular Republican and anti-British sentiments (inspired by bitterness over the War of 1812), despite a campus ban on making speeches supporting party politics. And it so happened that the person required to review speeches beforehand was the unpopular Peace Federalist and University President Robert Hett Chapman. Biddle not only dismissed Chapman’s edits, he gave the speech in its original form and then refused to stand down, inspiring near chaos to ensue on campus for days afterward. For Chapman, this event was essentially the last straw. Over the few years of his tenure, he and his family were subjected to student pranks of all sorts, including the tarring and feathering of the gatepost at his home and other destruction to his property, sometimes accompanied by taunting notes. Totally unrelated to these stressors, but certainly compounding the problem, his teenage daughter also died suddenly at age 15. She is buried in the Old Chapel Hill Cemetery. Chapman submitted his resignation in November 1816.

How does Polk fit into the picture? To write the Daily Tar Heel article, Charles Sellers’ biography James K. Polk: Jacksonian would have been an ideal source. In this book, Sellers quotes from Polk’s speech “Eloquence,” an inaugural address he delivered to the Dialectic Society, of which he was a member. With one line, Polk the undergraduate essentially advises his fellow students to never bow to faculty and to stay true to their ideals. Sellers uses this to emphasize the role and influence of the Dialectic and Philanthropic Societies on campus, each essentially a hotbed for 19th century anti-authoritarianism. This same quote appears in the DTH article and is credited as the speech that sparked the rebellion. The snag is that “Eloquence” was delivered on May 20, 1818, therefore almost two years after the Shepard oration. Polk was likely inspired by his rebellious classmates, but the documentation does not prove his involvement in the Infamous Uprising of 1816. Nevertheless, this provides fascinating insight into the rebellious nature of the 19th century undergraduate, which certainly continues to resonate with those at UNC centuries later.

When was the first student body president elected? Who’s a Di and who’s a Phi? What’s a Gimghoul? A new exhibit has been added to The Carolina Story: A Virtual Museum of University History that should answer those questions and … Continue reading →

When was the first student body president elected? Who’s a Di and who’s a Phi? What’s a Gimghoul? 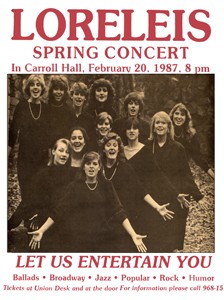 A new exhibit has been added to The Carolina Story: A Virtual Museum of University History that should answer those questions and more. It highlights some of the hundreds of organizations that have been a part of student life throughout the university’s history, including debating societies, student government, performance groups like the Loreleis and the Playmakers, activist groups, Greek organizations,  honor societies, secret societies, and others. Check out the new exhibit here.

Alumni–were you involved in student organizations while at UNC? Do you have photos, posters, papers, recordings, or other materials related to your organizations? If you are interested in donating these materials to the University Archives to help document the history of your organizations, please contact Jay Gaidmore (gaidmore@email.unc.edu).