UNC’s campus culture and the lives of students can be examined through the sometimes exciting, sometimes fraught lens of the performing arts.  From controversial visiting artists to the joyful and attentive work of student and faculty artists on campus, performance … Continue reading →

UNC’s campus culture and the lives of students can be examined through the sometimes exciting, sometimes fraught lens of the performing arts.  From controversial visiting artists to the joyful and attentive work of student and faculty artists on campus, performance has played a major part in representing the sentiment of any given time in UNC’s history.

A sample of resources you might use for research and curiosity about UNC’s relationship with performance is now available through the History of the Performing Arts at UNC library guide. 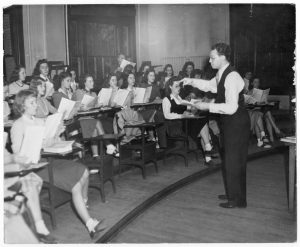 Following the resources in this guide, you may come across some interesting facts:

–There are several sketches, drafts of music scores and notes from Paul Green’s work with Richard Wright on the theater adaptation of Native Son. Native Son is one of Wright’s most well-known works and was staged in 1941 by Orson Welles “with imagination and force” (Atkinson, 1941). 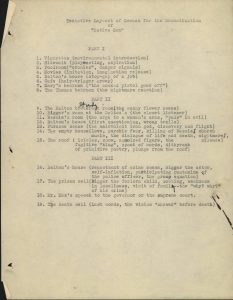 -Some performing arts groups on campus have been around longer than you might think. The Opeyo! Dance Company, founded by Herman Mixon in 1971, continues to participate in outreach. They still host Dancing for Hope in the Fall semester, a benefit offering donations to charitable organizations.

-Carolina Performing Arts’ records are surprisingly helpful for theater architects! Folders of information provide insight into the specifications required for remodeling Memorial Hall. The correspondence related to theater acoustics and audience seating are as architectural as they are performance-oriented in nature. 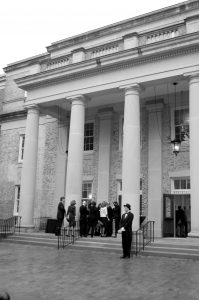 Kick off your research by using the Home tab as a directory to the subject, department, organization or medium you are exploring. For example, if you’re looking for the work of a playwright who was a professor at UNC, check for resources under the Academic Departments tab. If you’re looking for general photographs, ephemera or video, check the Visual Materials tab. You can access the library guide here.

1883 The Elisha Mitchell Scientific Society was founded. Composed of faculty, staff, and alumni of the University's science and mathematics departments, the society was organized to commemorate the name and contributions of Elisha Mitchell by fostering scientific research and disseminating scientific knowledge.
1958 The Ackland Art Museum was dedicated.
1979 The women's soccer program played (and won) its first game, blanking Duke University 12-0.