Imagine having 19 roommates instead of one.  How would you protect your belongings without a lock on your door?  What if your only source of heat in the winter occasionally spewed fireballs rivaling the Hunger Games?  Male students attending UNC … Continue reading → 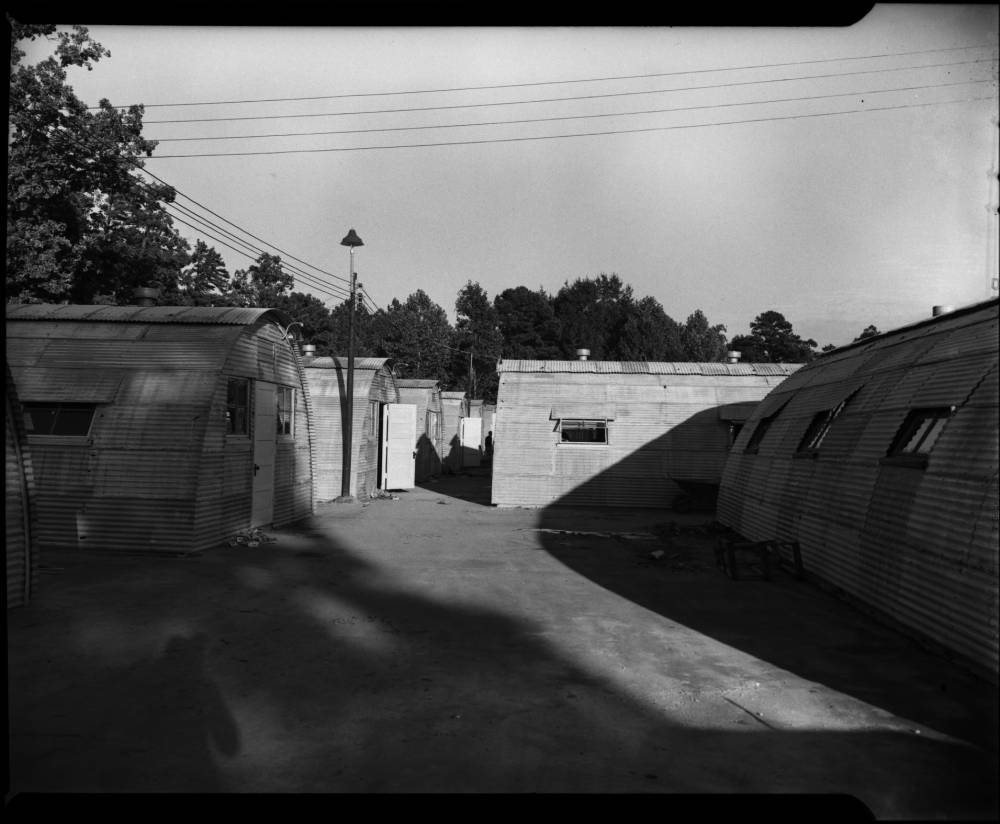 Imagine having 19 roommates instead of one.  How would you protect your belongings without a lock on your door?  What if your only source of heat in the winter occasionally spewed fireballs rivaling the Hunger Games?  Male students attending UNC immediately after World War II contended with these issues and more as residents of Quonset huts.

The G.I. Bill provided educational benefits to hundreds of thousands of veterans who served in World War II. Returning veterans flocked to UNC, raising enrollment from around 4,100 students before the war to 7,250 in the fall of 1947. (DTH, 10/10/1941, 9/25/1947)  The University simply did not have enough space to house all those students and resorted to creative measures to solve the housing crisis.  Military surplus owned by the federal government became an important source of temporary housing units such as trailers and Quonset huts.  Quonset huts were corrugated steel sheets shaped like a cylinder cut lengthwise and closed at the ends.  During WWII, the military used them for barracks or storage, but they were intended only for short-term housing.

However, UNC used Quonset huts as overflow housing from 1946 to 1950. Thirty-six Quonset huts were assembled on the old tennis courts behind the Monogram Club (now Jackson Hall), where Cobb Residence Hall stands today.  Thirty of them were designated as living quarters for single male students, three for studying, and three for latrines.  Up to twenty men lived in a single hut with a heater and primitive insulation made from rag paper. (DTH, 11/5/1946)  According to The Daily Tar Heel, rent for a bed in the Quonset huts costed $5 per month (DTH, 10/5/1946). 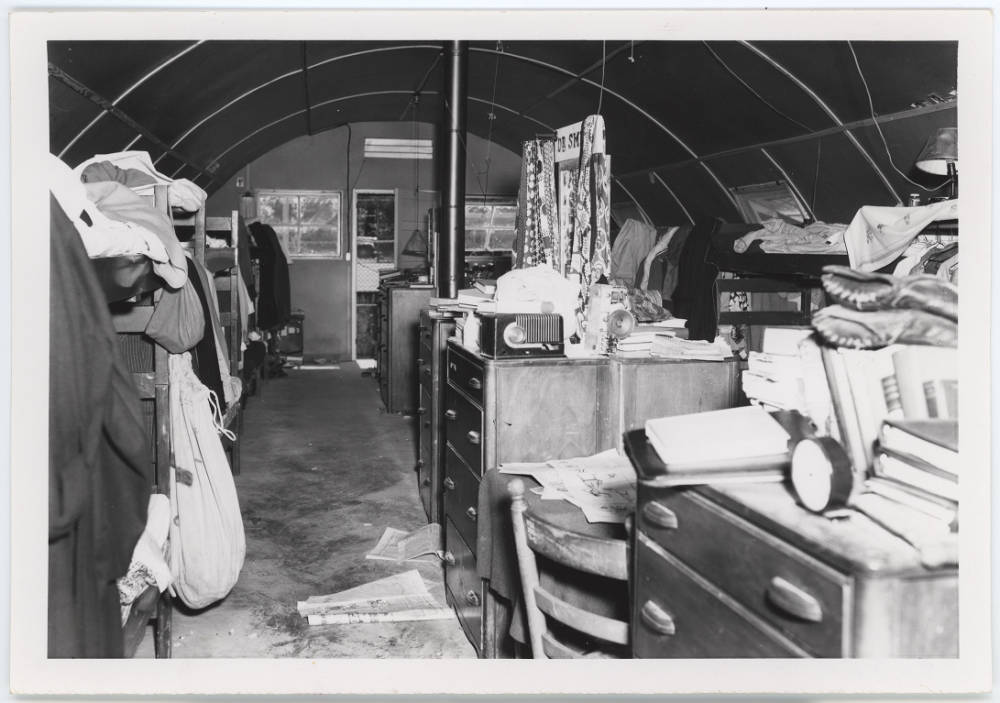 Inside a Quonset hut (1947) from University of North Carolina at Chapel Hill Image Collection.

The biggest issue with the Quonset huts was exposure to the elements. While summers turned the Quonsets into ovens, interruptions in regular fuel delivery during the winters left residents out in the cold.  A nationwide oil shortage in the winter of 1947-1948 forced the University to conserve fuel by closing six of the Quonset huts.  Still, during a frigid week in February 1948, half of the remaining Quonset huts ran out of oil.  The Daily Tar Heel reported that “siphoning of oil from the few huts with any left was apparently going on again last night.” (DTH, 1/7/1948, 2/12/1948)  After some rainy weather in April 1948, the Daily Tar Heel marveled at the mud surrounding the Quonset huts, “It was amazing and disgusting to see all of the mud.  Old-time Quonset hut residents merely sighed, rolled up their trousers, displayed their hip-boots and paddled through the goo.  It was a test of the old theory of survival of the fittest.” (DTH, 4/3/1948)

Clambering for scarce resources and wading through a veritable swamp were not the only tests of Quonset residents’ animal instincts. They also had to defend their territory after a robbery during a football game.  As Carolina faced off against the University of Georgia on September 27, 1947, thieves pilfered items and money from the Quonsets. To prevent another burglary, the RA, Ray Jeffries, had the huts padlocked beginning at 2 PM on game days. (DTH, 10/3/1947, 10/11/1947, 10/12/1947) 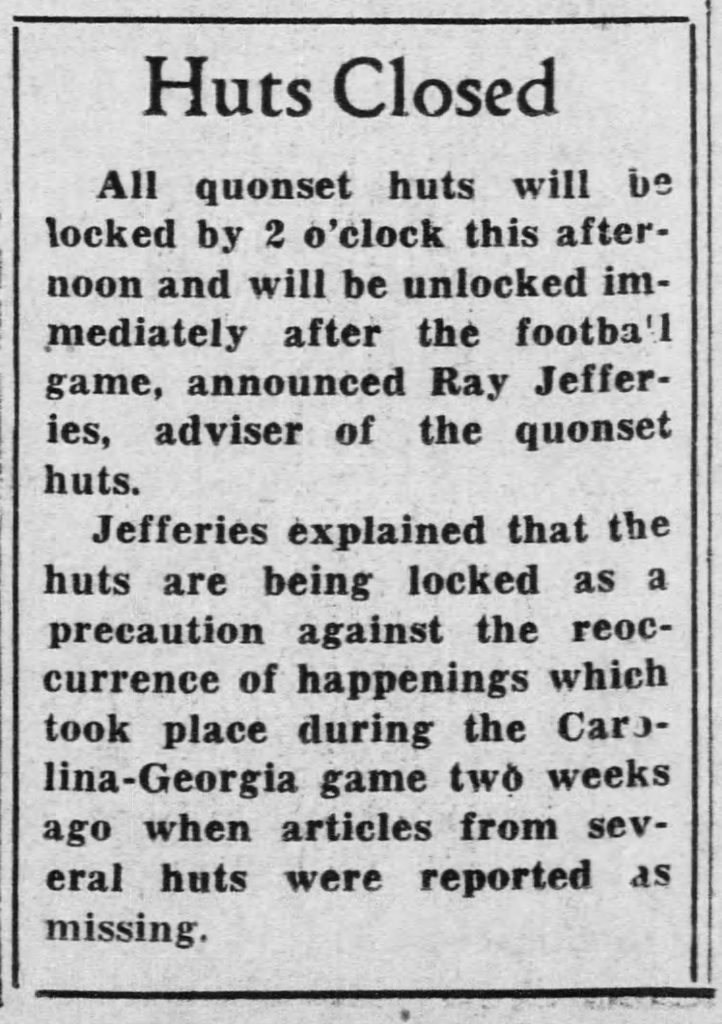 As if cold, mud, and robberies weren’t punishment enough, Quonset huts dwellers contended with fire as well. After a fire in February 1947, the University installed fire extinguishers in each hut to prevent such a blaze from getting out of control. (DTH, 2/23??1947)  In November 1947, a malfunctioning oil stove exploded into flames before a student managed to extinguish it.  Though the fire caused minimal damage, the Daily Tar Heel pointed out that next time the University might not be so lucky as the Chapel Hill Fire Department’s soap guns could not reach the fire without access to the Quonset hut area, which was closed to all vehicles except oil trucks.  The Daily Tar Heel suggested that the University “mount an emergency in a glass front box, of the fire alarm variety,” so that the fire department could reach the affected hut in case of emergency. (DTH, 11/18/1947)

By January 1949, the fire extinguishers were long gone when an “oil heater began leaking, formed a pool of oil on the floor and leaped into flame.” A student attempted to call the fire department, but found that the page with their phone number had been torn from the telephone book.  The student attempted to reach the operator, but met silence at the other end.  Finally, the student called the police who contacted the fire department.  (Such was the drama of communication before cellphones and Siri.) The fire department put out the fire, apparently reaching the hut without difficulty. The heater and a pile of dirty clothes were the only casualties.  (DTH, 1/16/1949)  A year later, the Quonset huts were razed to make room for Cobb Residence Hall. 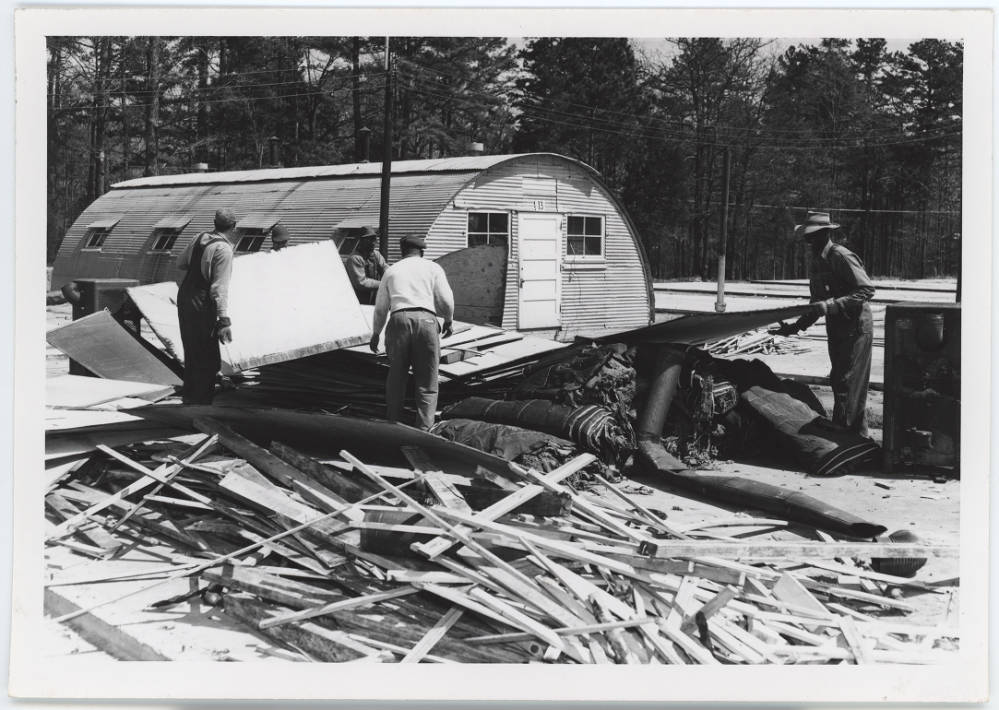 Quonset huts were crowded, uncomfortable, and unprotected. The Daily Tar Heel wrote of the Quonset hut residents, “in order to receive an education, they are living under conditions similar to that of an East side slum.” (DTH, 12/2/1947)  The comparison to poverty aside, the willingness of UNC students to live in these temporary structures for years indeed testifies to the importance they placed on education.  For many returning veterans, the GI Bill offered the chance of a lifetime.  To seize that opportunity, they baked through the summer, shivered through the winter, and waded through mud.  If nothing else, the Quonset huts certainly put the modern experience of dorm living into perspective.

Various articles from The Daily Tar Heel cited above.

1913 The details of Standard Oil Trust executive and Florida developer Henry M. Flagler's will were made public. Using portions of Flagler's estate, his widow, Mary Kenan Flagler (later Bingham), would eventually leave a substantial endowment to the University, the Kenan Professorship Fund.
1932 At a meeting called by longtime university librarian Louis Round Wilson, the Friends of the Library of the University of North Carolina was founded.
1958 The University held a groundbreaking ceremony for the new School of Pharmacy building (now known as Beard Hall).