Everything gets more stressful when parents get involved, especially choosing courses. In 1918, Llewellyn French signed up for a chemical engineering course that required 2 years of German.  At the time, the U.S was fighting Germany in World War I.  The … Continue reading →

Everything gets more stressful when parents get involved, especially choosing courses. In 1918, Llewellyn French signed up for a chemical engineering course that required 2 years of German.  At the time, the U.S was fighting Germany in World War I.  The war sparked a backlash against German culture and language.  Llewellyn’s father, William, protested his son’s enrollment in German language in a letter to University President Edward Kidder Graham, “I thought every true American institution had discarded everything pretaining [sic] to the cursed German nation, and I assure you I for one am just red blooded enough not to allow it in my family.  German cannot be spoken in my presence.”

President Graham responded the next day, explaining that the chemistry faculty found that students who didn’t read German had difficulty in that particular course. While it might seem like chemistry has nothing to do with foreign language,  in the early 20th century many scientific texts were written in German.  He further presented his own position on the language debate, arguing that educated men should continue learning German.   After all, he said, “I do not think we should cease to study cancer simply because the cancer preys upon the healthy body.”  However, Graham conceded that elementary schools should teach French, the language of America’s ally, rather than German.

This is not the only time that President Graham was asked to weigh in on the debate over German language. Other university presidents and the United States Commissioner of Education sent letters requesting that Graham make a public statement on his position.  These letters, including the elder French’s incendiary missives, are preserved in the University of North Carolina Papers at the University Archives.  You can see part of the exchange below: 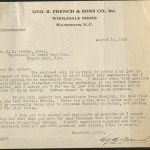 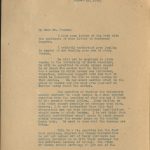 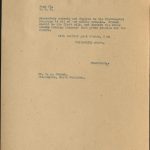 In the fall of 1918, students were preparing for battle. In August, Congress had lowered the draft age from 21 to 18, and as part of the Student Army Training Corps (SATC), students  drilled daily, anticipating the day that their … Continue reading → 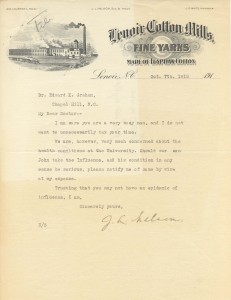 A parent asks to be notified by telegram if his son catches the flu (University of North Carolina Papers, #40005, University Archives).

In the fall of 1918, students were preparing for battle. In August, Congress had lowered the draft age from 21 to 18, and as part of the Student Army Training Corps (SATC), students  drilled daily, anticipating the day that their numbers would be called. However, before they could be sent to fight in Europe, they found themselves fighting a deadly enemy on their own campus—influenza.

The first wave of the global “Spanish Flu” pandemic began in the spring, followed by a much deadlier second wave in the early fall. By September 1918, it had spread to North Carolina. Concerned parents wrote to university president Edward Kidder Graham, fearful for their children’s health. 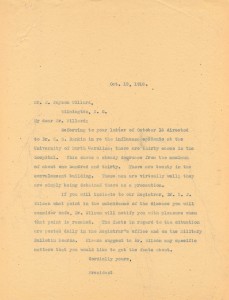 The campus was quarantined in October, and second-year medical students and local nurses were recruited to work in the overflowing infirmary. Three students died in a span of less than two weeks, and on University Day, 1918, no public gathering was held. After a few weeks, the situation seemed to be improving. In an October 19th letter to a parent, President Graham noted that there were 30 students in the infirmary and 20 convalescing—significantly fewer than the nearly 130 hospitalized a week before.

However, just two days later President Graham himself fell ill. Within days, he developed pneumonia as a complication of influenza. As the campus grew concerned about his condition and hoped for his recovery, the SATC commander asked that students not disturb Graham by marching or performing drills near his house. After less than a week’s illness, Graham died. 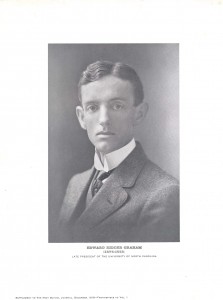 The next day, all classes and military drills were cancelled, and students were asked to “demean themselves in a quiet manner” in respect for the president. On October 31, Dean Marvin Stacy was appointed chairman of the faculty and assumed leadership of the university. Over the next two months, the war ended, the SATC disbanded, and the health crisis began to wane. However, influenza remained a serious threat. In January, 1919, Stacy also died of pneumonia as a complication of influenza, just less than three months after the death of his predecessor by the same illness.

By the spring, the global pandemic was ending. Over the course of the epidemic on campus, over 500 were treated for influenza in the infirmary and six died—students William Bunting, Larry Templeton, and Kenneth Scott; nurse Bessie Roper; President Graham; Mrs. W.J. Hannah, a mother who caught the disease while caring for her son; and Dean Stacy.