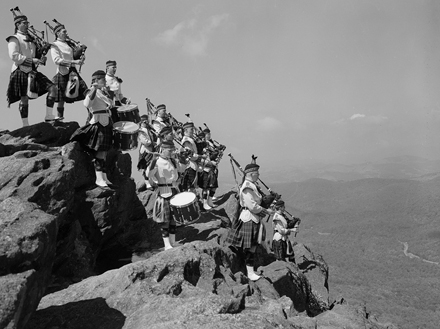 “They weren’t designed to be played in recording studios. They were designed to be played on the tops of mountains,” the voice-over said on the radio as bagpipes in the background played “Amazing Grace.” I stopped making my morning tea when I heard that. A Hugh Morton photograph just flashed in my memory. “There’s no escaping that collection!,” I thought (in a good way).
I was listening to NPR early Sunday morning when that promotional spot for Weekend Edition Sunday aired, but Ollie, my dog, needed to be walked and I missed the story. Fortunately NPR posts its news programs on its Web site so if you missed it too, you can hear “Royal Scots Dragoon Records ‘Spirit of the Glen'” featuring the album’s producer Jon Cohen. Cohen talks about the challenges of working with the military band, and how orchestrating the sound of bagpipes compares to producing recordings for bands as diverse as the Backstreet Boys and the OperaBabes.
The Hugh Morton photograph that came to mind Sunday morning is actually a postcard in the Durwood Barbour Postcard Collection. It depicts a group of bagpipers and drummers on top of Grandfather Mountain during the Grandfather Mountain Highland Games. See the North Carolina Collection’s short history about the games in the “This Month In North Carolina History” entry written this past August. And now would be as good a time as any to mention the large ongoing project of digitized North Carolina postcards by the NCC staff.
You know, the strands of serendipity wend their ways on the strangest paths. I did a bit of fruitless searching for the original color slide, so I asked Elizabeth if one of those boxes you see on the table in her post, “A Processor’s Perspective,” had any Highland Games negatives. She pointed to the box and I grabbed the first envelope I saw with black-and-white negatives (easier to scan!) labeled “’61 Games—GMTN.” Inside were several 120 format (2-1/4 inch square) negatives, and one looked very similar to the post card. I scanned it, but the image had some lens flare across a bagpiper’s face so I dismissed it. I did noticed, however, that a bass drum in the upper left corner had on its skin: “Carnegie Tech Kiltie Band.” It was the last negative on a roll of film—the only image of the group on the mountaintop—and it’s not like Hugh Morton to command a group of people to very tip of the mountain only to make one exposure. So I went back to the box to see if there was another envelope from 1961. There was, labeled “Highland Games ’61”; it did not, however, have any more images of the band.
I started my search anew for a different image. Further down in the box was a blank envelope on which Elizabeth had penciled a note: “H.G. late 50s-e.60s.” (That’s archivist talk for Highland Games, late 1950s or early 1960s). I peeked inside and saw three 4×5-inch black-and-white negatives and some 120 negatives. Wouldn’t you know it? One of the 4×5 negatives was the Carnegie Tech Kiltie Band. I scanned that negative and prepared it for loading onto the blog, cropping the image to my liking.
For my post, I wanted to link to the Durwood Barbour postcard and draw your attention to that project, which includes several Hugh Morton postcards. I searched for the image and found it. Would you believe the postcard in the Durwood Barbour collection shows the very same Carnegie Tech Kiltie Band?! The postcard doesn’t state that, nor the date of the image. We can now add that information to the postcard’s descriptive information.
Do you think there’s any coincidence that my brother graduated from Carnegie-Mellon and that my father was an assistant football coach there for twenty years? I don’t know, but if my best friend from high school calls me up one day soon and says, “I never mentioned this before, but my father played the bagpipes on Grandfather Mountain during his Carnegie Tech days,” I’m going to get the shivers. 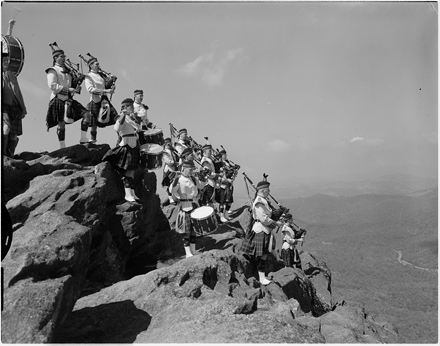