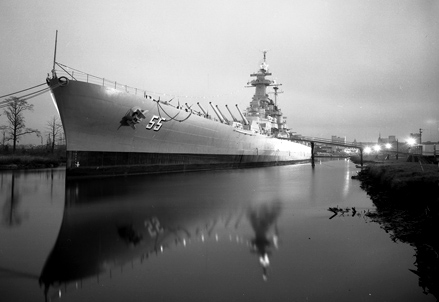 In honor of the recently-opened exhibit, “Showboat”: The USS North Carolina (BB 55), at the North Carolina Museum of History, and since I just happened to be “passing” through this particular batch of negatives, I decided to highlight a few of my favorite Morton images related to the USS North Carolina.
Morton was enlisted in 1960 by his good friend and then-governor Luther Hodges to spearhead the ultimately successful campaign to preserve the battleship as a memorial to World War II veterans. The article “Saving Our Ship” on the USS North Carolina Memorial Web site provides background on the campaign and Morton’s leadership, noting in particular that “Morton’s drive to control the administrative costs of undertaking such a large campaign led to savings such as using his young son on campaign posters rather than paying for a model.” The image below must be a mock-up of one of those posters.  [The boy in the image below is not one of Morton’s sons, but there are images in the collection showing Jim Morton holding a model of the USS NC that were possibly used on campaign posters.] 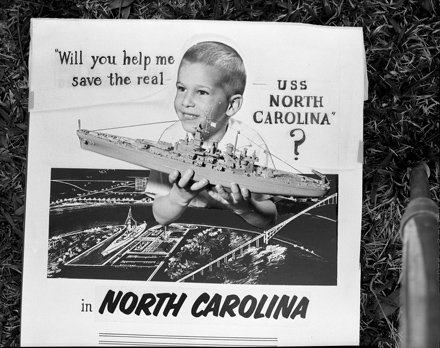 This last image depicts John Weaver working on two busts for the USS NC Museum (likenesses of FDR, Chester Nimitz, MacArthur, and Truman were made—not sure which two these are). [Correction: This is not John Weaver, but a Linville artist named Coffey, and these heads were not created for the USS NC. Just goes to show that an archivist can’t always trust the contextual information that comes with a document! Thanks to Julia Morton for clarifying.] 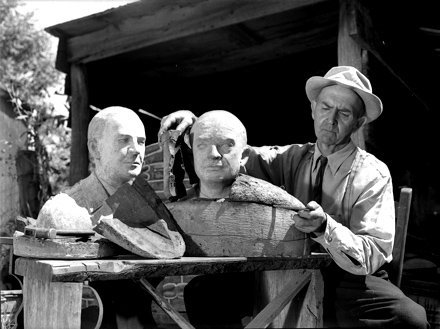 One last note: as I was just proofreading the contents of this post, I happened to notice today’s date: December 6. Tomorrow is the 66th anniversary of the attack on Pearl Harbor. Crazy coincidence strikes again on “A View to Hugh!”